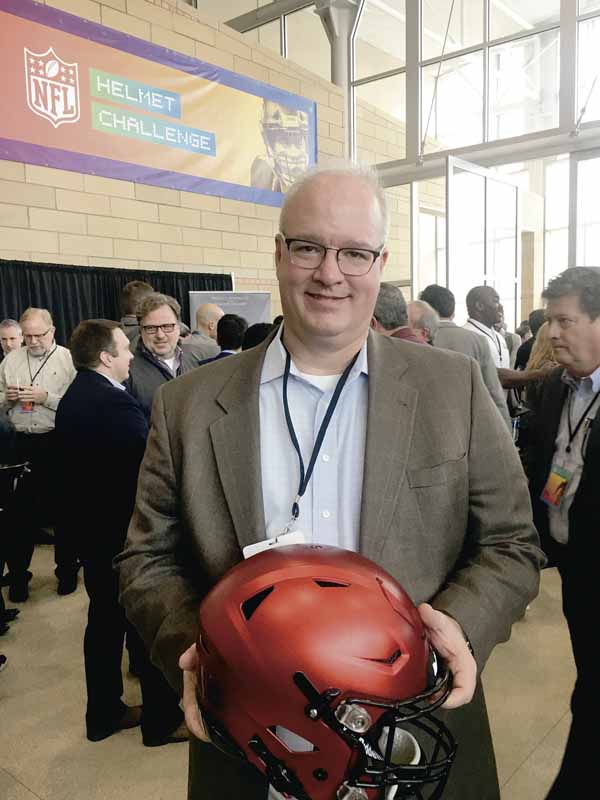 That succinct assessment from Erin O’Donnell goes a long way toward explaining what she sees as a major shift in how the city has transformed itself into a technological hub on several fronts. It also describes the driving force behind an NFL Helmet Challenge symposium that kicked off Wednesday at the DeYor Performing Arts Center on West Federal Street.

The three-day gathering that wraps up at noon today brought together scientists, engineers and helmet manufacturers as well as experts in additive and advanced manufacturing to collaborate on innovative ways to create a safer helmet and improve player safety.

O’Donnell, director of partnerships and community relations for America Makes, noted Thursday that such high-tech manufacturing has been pivotal in transforming the city’s landscape over the past 10 years. In addition, America Makes’ partnerships have allowed Youngstown to be the ideal “ecosystem” and epicenter for such growth, she said.

America Makes is a national accelerator for additive manufacturing and 3-D printing.

For example, the company partners with Youngstown State University, the Youngstown Business Incubator, the Youngstown Warren Regional Chamber and Brite Energy Innovators in Warren. YSU is one of a handful of universities in the nation that has all seven additive-manufacturing processes, along with professors who are experts in the field, O’Donnell noted.

“America Makes is the only additive manufacturing innovation institute in the U.S., and is located in Youngstown, Ohio,” she said, adding that the business also works on a federal level with the departments of Defense, Energy and Commerce, as well as in academic circles.

The symposium featured a number of workshops and panel discussion on topics such as concussion prevention in the NFL and integrating new ideas in helmet design and manufacturing, along with lessons gleaned from NASCAR and the automotive industry.

In his presentation, “The NFL Engineering Roadmap,” Dr. Jeff Crandall explained that more sophisticated laboratory tests have been conducted to simulate typical situations on the football field. As a result, helmets have improved significantly since 2015, said Crandall, a professor emeritus of engineering and applied science at the University of Virginia.

Crandall, who’s also the founding director of UVA’s Center for Applied Biomechanics, differentiated between transformational (linear) and rotational (angular) motion by saying that the latter is responsible for the majority of concussions. Along those lines, more data, tests and tools are being used to develop a safer helmet that would be more resistant to such high-speed impacts and drastically reduce the incidence of concussions and other head injuries, he noted.

Crandall also mentioned “Play Smart, Play Safe,” a $100 million initiative NFL Commissioner Roger Goodell launched in 2016 to better prevent, diagnose and treat head injuries and enhance medical protocols. Of that amount, the campaign has dedicated about $60 million to engineering research and the rest to medical research, he continued.

“Helmets (also) need to be part of injury-prevention programs,” he said.

Also key in reducing injuries has been certain league rule changes, added penalties and the elimination of some types of tackles, noted John York, owner of the San Francisco 49ers and chairman of the NFL owners’ Health and Safety Committee.

For example, the so-called horse-collar tackle was made illegal, in which a defender grabbed an opponent’s back collar or shoulder pads and violently pulled the ball carrier downward. That maneuver was responsible for “too many injuries to the neck and back,” York noted.

Greater efforts have been made to use protocols to take better care of players and develop criteria to more accurately and quickly diagnose concussions. Also, physicians can more often make on-the-spot diagnoses and conduct a series of tests to determine if a player has a concussion, he continued.

Despite gains in understanding concussions and taking proactive measures such as safer helmets to reduce the number of them, it’s probable that no method will eradicate all injuries. Nevertheless, creating better helmets is a huge step forward, said one expert in attendance at Thursday’s symposium.