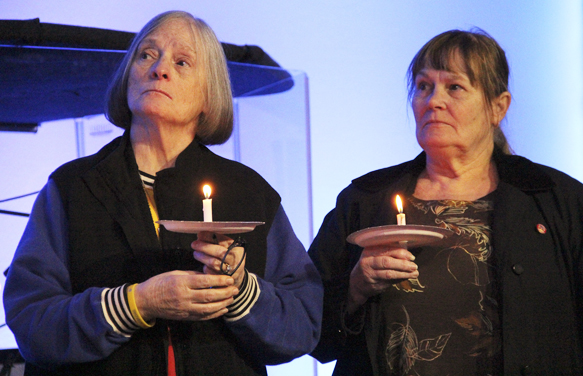 Staff photo / Allie Vugrincic Sisters Cheryl Clinton of Youngstown, left, and Diane Coandle of Liberty, hold candles in memory of their brothers, Willie and Daniel, who died from suicide in 1993 and 2003, respectively, during a candlelight vigil in remembrance of loved ones who died from suicide Saturday night at Victory Christian Center in Warren.

WARREN — A small group gathered at Victory Christian Center on Saturday night for a candelight vigil to remember family and friends lost to suicide.

Among them was Virginia Shank, who lost her foster brother, Ronnie, to suicide in 1993.

Shank said she came from a family of nine, and her parents also fostered many other children over the years.

“We are preacher’s kids … suicide was not something that was talked about,” Shank said.

Shank said Ronnie, a veteran, returned home from Operation Desert Storm, and the family discovered he had developed drug problems.

One night, Ronnie got into an argument with his brother-in-law, and in what Shank said has been described as “crack-induced rage,” Ronnie stabbed him with a knife in the neck. While the brother-in-law was taken by helicopter to a hospital, Ronnie locked himself in a room and shot himself in the head just as one of his friends was coming through the door to stop him, Shank said.

“We’d had loss, we’d had different things, but this was so different,” Shank said.

Shank said at first she threw herself into busy work, helping her mother plan Ronnie’s funeral, but eventually the weight of what had happened hit — and that was when Shank found peace in faith. Now, she shares Ronnie’s story and her own story of survivorship and faith.

Sisters Cheryl Clinton of Youngstown and Diane Coandle of Liberty came in memory of their brothers, Willie and Daniel, who died from suicide 10 years apart, in 1993 and 2003, respectively.

“There’s a lot of depression in our family, but you don’t see that coming,” Clinton said.

Like Shank, the sisters have found solace in their faith.

Mary Kopiak, who started the vigil 21 years ago with two other survivors of suicide, said she got the idea when she heard that National Suicide Awareness Day is Nov. 20 — the same day her daughter, Valerie, died from suicide in 1998.

“My heart just jumped out of my chest,” Kopiak said. She said as long as she’s alive, the vigil will continue.

“My heart went to heaven when Valerie died,” Kopiak said. “It changes you forever.”

Kopiak said when Valerie died, there was a serious stigma around suicide, and a lack of understanding for grieving families. She said the stigma has decreased, but likely always will remain.

At the vigil, survivors were able to come together with others who understand. Grizinski said the light from the candles represented the memories of their loved ones.

Wearing a shirt that read “5 a day,” Grizinski said that was the number of people in Ohio who “hurt so much” that they die by suicide. She said Help Network of Northeast Ohio, which services Trumbull, Mahoning and Columbiana counties, gets about 120,000 calls each year.

Resources for those in crisis or for family and friends are also available through the Help Network of Northeast Ohio 24/7 at www.helpnetworkneo.org or by calling the hotline at 330-747-2696.

The Trumbull County Mental Health Recovery Board holds a suicide prevention coalition meeting at 3 p.m. on the second Tuesday of each month at the board office, 4076 Youngstown Road SE. Director April Caraway said the board is working to promote suicide awareness and prevention programming in area schools and also promoting a “mantherapy” campaign because the majority of completed suicides in Trumbull County are middle-age men. Resources for men are available at www.mantherapy.com.