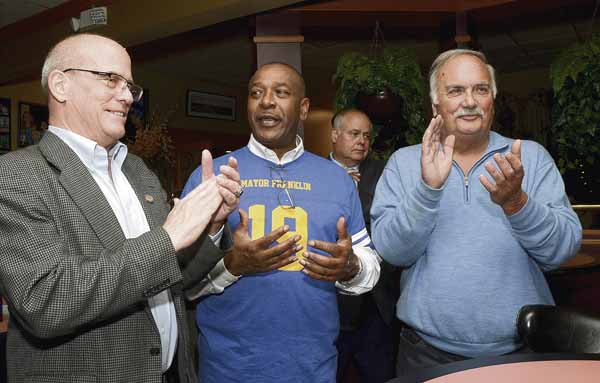 WARREN — Incumbent Mayor Doug Franklin defeated Randy Law in all precincts in Tuesday’s election, according to a breakdown of votes by the Trumbull County Board of Elections.

Franklin won with 67 percent of the vote, which was his largest margin of victory yet as he earned his third term.

Among the seven wards, there are 23,708 registered voters. A quarter of the voters — 5,789 — turned out for the general election.

“A 25-percent turnout in Warren is actually pretty good for a local election” said Stephanie Penrose, director of the elections board.

The two candidates collected 5,707 votes on Tuesday, with 82 voters casting an absentee ballot.

“There were no write-ins for mayor. Some people just choose not to vote for every race,” Penrose said.

Law averaged 32 percent of the vote in each ward, but did better in the 3rd Ward, with 41 percent there. He performed best in the 3-G precinct that includes the 1900 to 2200 block of Elm Road NE, along with Irene Avenue and Plaza Avenue — winning 45.7 percent of the vote there, results show.

Law performed the worst in the 4-F precinct that includes Niles Road SE, the 100 to 600 blocks of South Street and Pine Avenue. He mustered only 8.8 percent of the vote there.

Franklin was surprised to see such a huge gap between his numbers and Law’s.

“I’ve never experienced this kind of a win,” Franklin said. “The message was very clear and showed a record of promises made and delivered on.”

Franklin believed he would win because he made the race hard for Law, who ran as an independent.

Things that Franklin has accomplished are “things people can see.” These items include road improvements and fully staffed police and fire departments.

“We countered his arguments and I gave evidence that what he was saying wasn’t true, I gave him a big boulder to push,” Franklin said.

He said he will focus on safety in the city in his next four years as mayor. Another priority will be to demolish the dilapidated and vacant former St. Joseph Riverside Hospital on Tod Avenue NW.

Following the election, Law said he thought he would have done better. He could not be reached for comment for this story.