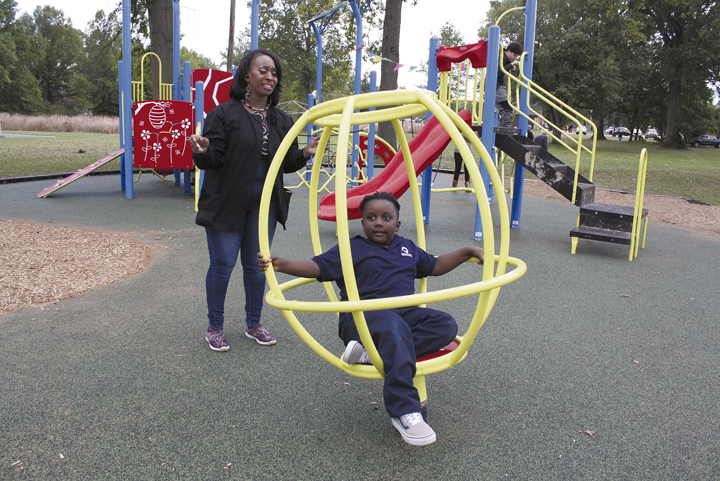 Staff photo/Ed Runyan Auston Shaw-Martin, 5, plays on one of the new pieces of playground equipment at Quinby Park on Austin Avenue Southwest Friday afternoon after a dedication ceremony. At left is his aunt, Nailah Shaw.

For Nailah, it was an opportunity to show Auston the simple joys of a swing, which she demonstrated for her 5-year-old relative.

For Auston, the swing appeared to be a new experience that will take a little time to master, but he had no trouble getting inside the new “spinner” toy and turning himself around as if he were a planet spinning on its axis.

Auston also delighted in showing his aunt and grandfather, Pastor Austin Shaw, how well he could navigate the other new playground equipment at the 90-year-old park.

A little earlier, Mayor Doug Franklin, Denise Rising of Trumbull Neighborhood Partnership and others helped dedicate the new playground, which features a poured-rubber surface accessible to children of all kinds, including those with disabilities.

It also features interesting design elements that officials said they expect to draw attention from motorists driving down the street.

The ribbon cutting was an opportunity to thank the Community Foundation of the Mahoning Valley’s William Swanston Charitable Fund for its $85,000 donation to the $99,000 project. The other $14,000 came from the Creating Healthy Communities Coalition, which is coordinated by the Trumbull County Combined Health District.

Dennis Mangan, Swanston Fund chairman, explained the fund was created exactly 100 years ago upon the death of William Swanston, a Canfield Township farmer who wished to donate his money to build an orphanage.

But by the time the fund had grown sufficiently, orphanages no longer were being built, so trustees and Mahoning County Probate Court have used the money to fund programs dedicated to the care of abused, neglected and dependent children, Mangan said.

Denise Rising, community outreach coordinator for Trumbull Neighborhood Partnership, which applied for the money from the Swanston Trust and oversaw the construction, said community members had a voice in choosing the type of playground equipment installed through a Kids To Parks Day on May 31.

They were shown six types of playground equipment and asked to select the type they liked the most. The playground also makes use of several pieces of existing equipment.

Shaw said playgrounds are sorely needed today in the era of digital playthings.

“It will give kids something to do besides the internet,” she said. “Everybody will learn to have real social skills.”