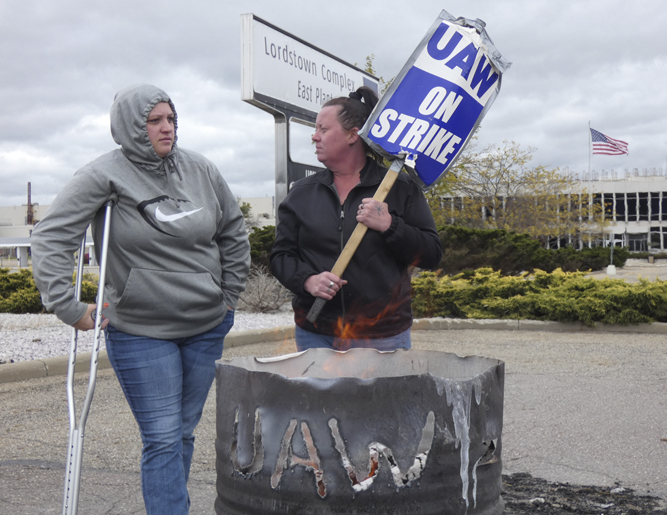 Staff photo / Ron Selak Jr. Desiree Cavanaugh, left, and Sheila Deeter, both of Lordstown, stand on the picket line Thursday outside the idled General Motors assembly plant in Lordstown. The former plant employees said they are disappointed to learn a tentative agreement between the United Auto Workers and GM will not keep open the facility that closed in March.

LORDSTOWN — With a tentative four-year agreement between United Auto Workers and General Motors, the worst fear of UAW Local 1112 members was realized Thursday when details of the proposal were released publicly — the Lordstown assembly plant will close for sure.

Local union and other officials had held out hope union bargainers could convince GM to assign a new vehicle production line to the massive facility that went idle in March, but that hope was dashed, leaving feelings of betrayal and disappointment.

“Heartbroken,” was the reaction of Bill Adams, Local 1112 vice president when the UAW released a summary of the new contract for hourly workers. “They are taking everything away from us. Betrayal. It’s really hard to put into words, like that empty pit in your stomach.”

Details posted to the UAW website contain no mention of GM’s offer to locate a battery cell production line in or near Lordstown — a proposal that leaked early in bargaining — but GM in a statement said it is committed to future investment and job growth in Ohio.

“Projects planned for the Mahoning Valley include the opportunity to bring battery cell production to the area, which would create approximately 1,000 manufacturing jobs, as well as the sale of the GM Lordstown Complex to Lordstown Motors Corp., a new company that plans to build electric pickups for commercial fleet customers,” said GM spokesman Dan Flores.

Adams said he doesn’t know why the battery plant wasn’t bargained into the proposed agreement, but speculation Thursday from a source familiar with the situation was that negotiators shied away from including it to avoid setting a precedent for lesser-paying jobs, which are expected to be in the neighborhood of $17 per hour. The top wage earners at the assembly plant earned about $30 per hour.

The battery factory would employ about 1,000 workers. It would be a UAW-represented facility.

Lordstown Motors Corp. would initially employ about 400 workers. Its CEO, Steve Burns, said as recently as last week that he remains targeted on a production start date of late 2020 for the truck that’s been named Endurance.

The company has ties to Cincinnati-based Workhorse Group Inc., which was founded by Burns. Workhorse, on the short list of companies in the running for a multibillion dollar contract to provide electric delivery vehicles for the U.S. Postal Service, would hold a minority stake in Lordstown Motors.

The tentative deal that still needs approval from rank-and-file members gives workers a mix of pay raises, lump-sum payments and an $11,000 signing bonus.

In exchange, the contract allows for GM to close Lordstown and powertrain plants in Warren, Mich., and near Baltimore. The Detroit Hamtramck plant, which GM wanted to close, will stay open and a new electric pickup truck will be built there.

The deal shortens the eight years it takes for new hires to reach full wages and gives temporary workers a full-time job after three years of continuous work. Workers hired after 2007 who are paid a lower wage rate will hit the top wage of $32.32 per hour in four years or less. The deal also provides a $60,000 early retirement incentive for up to 2,000 eligible workers.

It also provides an assistance package for the impacted workers in Lordstown, Michigan and Maryland.

UAW members will begin voting on the contract Saturday after factory-level union officials Thursday in Detroit voted to recommend the contract following a marathon meeting. Voting is scheduled to finish Oct. 25. Workers will not return to factories before then.

Local UAW President Tim O’Hara and Dan Morgan, shop chairman, were in Detroit to vote with 40 to 50 members of Local 1112, who were there to oppose the deal for shutting out Lordstown.

Picketing GM workers outside the Lordstown plant Thursday said they were disappointed with the final outcome of the facility.

Desiree Cavanaugh of Lordstown, who worked at the facility for 11 years, transferred to GM’s plant in Spring Hill, Tenn., where the Cadillac XT 5 and XT 6 and GMC Acadia are made. There alone and her family still in Trumbull County, she thought she would eventually come back to Lordstown.

“I thought for sure it would still be here to come back. Not seeing that happen is kind of a punch in the chest,” she said.

Sheila Deeter, who started as a temporary worker in 2002 until becoming full-time in 2007, turned down a forced transfer to another plant to stay with her family. She no longer has a job with General Motors because of the decision.

“I took a job to provide for my family; now they want to tear my family apart,” she said.

Richard Marsh of Lordstown, who with 25 years at Lordstown was transferred to GM’s Corvette plant in Bowling Green, Ky., called the situation with the assembly plant a “disgusting display of corporate greed.”

The tentative agreement between GM and the UAW now will be used as a template for talks with GM’s crosstown rivals, Ford and Fiat Chrysler. Normally the major provisions carry over to the other two companies and cover about 140,000 auto workers nationwide. It wasn’t clear which company the union would bargain with next, or whether there would be another strike.