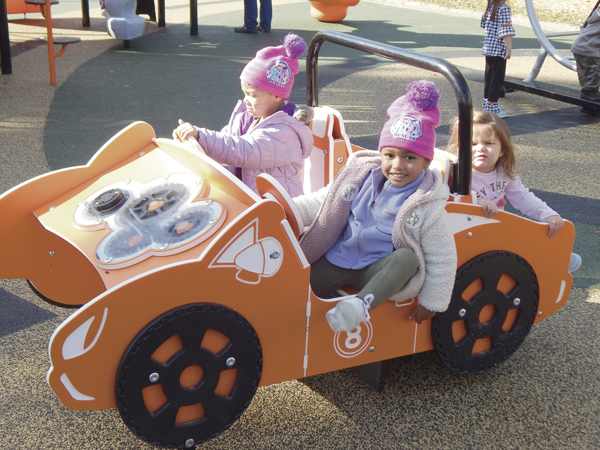 Taylor May, 4, of Niles. front left, Touri Adams, 3, of Niles, and Brynlee Schellhorn, 2, of Howland, in back, play at newly open new Tiger Town a Howland Township Park.

HOWLAND — The weekend’s weather provided families with young children the chance to get outside, including at the newly opened Tiger Town at the township park.

After more than a month of work, delayed due to rain at times, the first phase of the play area opened Saturday.

Jonathan and Megan Schellhorn of Howland were at the park with their three children.

“This is amazing. It is well done,” Jonathan Schellhorn of Howland said.

“When I was in high school, I helped build the other Tiger Town. My wife helped, too, when she was in school. All the football team and the students helped put it up. It is like a passing of the torch to now continue on with another playground at the park,” he said.

Bea Gray was at Tiger Town with her husband, Ron Gray, and their granddaughters, Kensington Greenwood, 6, and Emmalyn Greenwood, 4, of Howland.

Bea Gray said it was sad to see the old Tiger Town taken down as so many people in the community helped build it, but “the new one is really nice and open. You can see where the children are. My grandchildren have really enjoyed this.”

Megan Schellhorn said she likes being able to see her children on the playground.

“The other Tiger Town was nice, but it was sometimes hard to see where my children were because they were so little,” she said.

Howland Park Commissioner Shawn Pompelia said the first of three phases for Tiger Town was completed. The play units have been set up, special rubber mulch placed around the area and edging work done, he said.

Park Play Solutions did the work with the park board purchasing $61,757 in play equipment and units from the company.

In addition to a sliding board, swingsets and jungle gym, the play units include ­an island helicopter, a junior sports car, drag race vehicle and custom biplane that children can get inside.

The former Tiger Town, which was located in the northwest corner of the park, was torn down in 2018 due to its age and safety concerns.

Members of the community and the park board held fundraisers to raise money for the new project. In addition, grants from different foundations were sought to cover the cost of the estimated $440,000 needed for the new Tiger Town, Pompelia said.

Pompelia said tiles decorated by children and bricks from the old Tiger Town have been kept and will be incorporated into the new Tiger Town. Other parts of the project include the rubber surface was done by Fibar Systems of Georgia, he said.

Readman Landscaping will be setting a brick boarder around the play set. Top soil, seed and straw will be down where Fibar was mixing the material for the rubber surface.

“The walkway will be cut out in the fall, so the surface will be ready for bricks to be installed on the walkway in the spring. The brick border material will be the bricks the community purchased along with the walkway,” he said.

Park Board member Jessica Gault had said the new play area would be in another section of the park as recommended in a recently completed comprehensive plan because the area by Tiger Town is near a flood plain. The new location also would be near restrooms.