One local farmer ready to find out 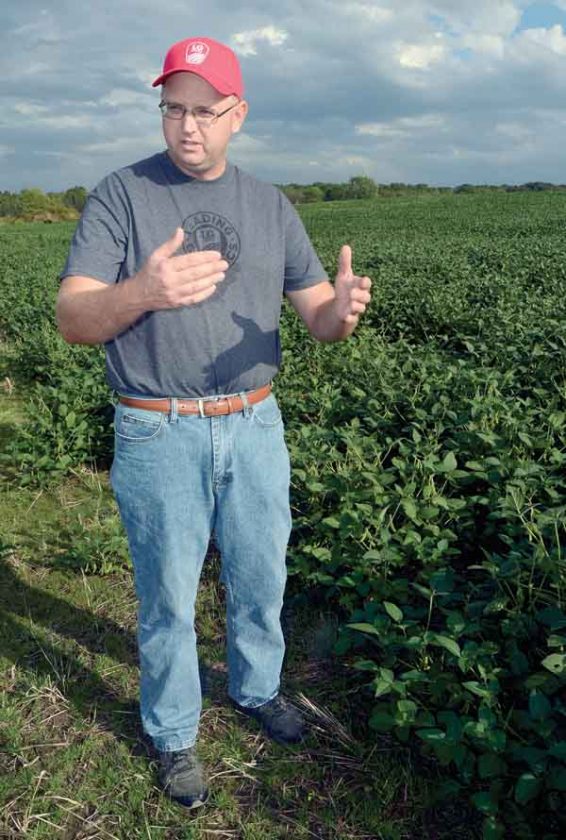 Farmer Steve Kacerski of Hartford talks about his plans for growing hemp since the plant’s cultivation became legal in Ohio. There are three varieties of hemp — grain, seed and floral — which is what is used to produce the popular CBD, or cannabidiol extracts, now used in food and dietary supplements. Staff photo / R. Michael Semple

Overlooking his soybean and corn fields outside his home in Hartford, Steve Kacerski seems willing to gamble some of those more steady crops on hemp, a plant that could unlock the door for struggling Ohio farmers to earn a new buck, but one that comes with uncertainty and risk.

“My intent is, I’d like to probably grow about 10 acres of it next year just to kind of test it out, assuming I can get enough seeds and plants to do that,” Kacerski said.

He grows wheat, soybeans and corn on about 900 acres in several communities in eastern Trumbull County and one in western Pennsylvania. But he sees this as an opportunity to get in on the ground floor of a market with the potential for growth.

Still there are more questions than answers as farmers across Ohio try to get a handle on the newly legalized crop and weigh the risk going into 2020, what’s expected to be the first planting season for hemp.

“We are receiving phone calls by the bunches,” said David Miran, executive director of the Ohio Department of Agriculture’s hemp program. “Our phones are ringing off the hook with people who are interested in both growing and processing here in Ohio. Obviously that may not translate into a direct one-to-one ratio, but the interest is very significant.”

One of the big questions is, “How do I get licensed?” Miran said. Another, “How do I grow it.”

“That is an excellent question. Hemp is not corn, it’s not soybeans. It’s going to be a different agricultural commodity than any Ohioan is used to and we kind of just break it down for them … and give them as much information as we can.”

Also, is there a market for hemp?

“That is probably, from a farmer’s perspective, the most important question. It is one thing to grow; Ohio farmers grow exceptionally well … but they need a place to sell their product,” Miran said.

There are three varieties of hemp — grain, seed and floral, which is what is used to produce the popular CBD, or cannabidiol extracts, now used in food and dietary supplements.

The No. 1 question from a processing perspective is, will the infrastructure exist in time for the 2020 harvest to process hemp flowers into oil? Miran said he believes so and in fact, he’s of the opinion there will be “a large number of processors up and running” by then to extract oil from the hemp plant.

Processing help for grain, he said, is a bit easier because it’s akin to a traditional food crop. For fiber, there are fewer processing plants in the U.S. He hopes to attract a fiber processor to Ohio.

Lee Beers, extension educator for agriculture and natural resources at the Ohio State University Extension in Cortland, said interest in growing hemp is high, but it’s coming from a nontraditional source.

“It’s not the farmer in overalls driving the tractor getting the corn,” Beers said, but a new segment of potential growers interested in CBD oil.

Although curiosity is high, Beers said he doesn’t expect that to translate into crops into fields next growing season.

“This time next year, driving through Trumbull County, you’re not going to see hundreds of acres of hemp,” Beers said.

Expect the case to be similar in Mahoning County.

“A lot of folks, they’re asking questions, what is going on with hemp,” said Eric Barrett, Mahoning County OSU Extension educator for agriculture and natural resources. “They are not asking how do I start hemp yet.”

“It’s in such an infancy right now, we’re looking to see what does the future really hold,” Barrett said.

Concern regarding the lack of infrastructure to process hemp and market to sell the product are dampening farmers’ enthusiasm toward the crop. Some are also wondering about the investment needed, including in new equipment, storage and manpower to grow and harvest hemp.

“A lot of people get excited and the market crashes. We just don’t have the infrastructure to handle the product,” Beers said. “Hemp is a great crop, you can get fiber, you can make plastics from it, oil … but we just don’t have the processing facilities in the U.S. to deal with the increased acreage. You can be able to grow a lot of hemp, but selling it on the other end is not going to be so easy.”

Beers’ advice to local farmers considering hemp: “Don’t over-commit to it and be prepared to lose money in the first year or two.”

Ty Higgins, director of media relations for the Ohio Farm Bureau, in August visited a hemp farm in Kentucky, where hemp has been grown for a couple years. He went to learn about the industry to see if any elements can apply in Ohio.

There is a higher return on the back end for hemp used in CBD, but the labor cost is higher to produce. Hemp for seed or fiber, Higgins said he learned on the trip, is less profitable. In addition, in Kentucky, it takes six to eight weeks for results to come back on tests done to measure the THC levels in hemp.

Because of the unknowns involved he believes Ohio farmers will “dip their toe” into hemp to gauge the risk and reward.

But with some trial and error — what’s the best variety for a farmer’s locale based on soil and climate, how many plants per acre, labor costs — and education, farmers in Ohio will figure out what works best for them, Higgins said.

“It’s a risky crop, but farmers are looking for another way to diversify their crop portfolio, but on a small scale” to start, Higgins said.

It appears there are few farmers in the Mahoning Valley as gung-ho on hemp as Kacerski, whose primary job is as a certified public accountant in Hubbard. Farming is a second job he does with his dad, who also had a farm in Kacerski’s youth, but it, too, was a second job.

His specialty is tax work for farmers, which is what spurred his interest in hemp. He said a client of his connected him with some people in the hemp industry looking for Ohio farmers to grow the plant before lawmakers legalized it earlier this year.

His interest in growing hemp is high, but his eagerness is tempered as he still needs to find a suitable supply of plants or the seed stock to grow it. Also, he said, the plants must all be female plants to yield the highest concentration of CBD. Even a few male plants, he said, can cross pollinate and cause the level to drop.

There’s also the startup cost involved. License fees in the draft rules put out by ODA — $100 for a yearly license and $500 for each location, he said, — are reasonable, but the cost begins to rise for hemp stock.

Kacerski said for hemp for CBD oil, which is his interest, the rule of thumb is 1,500 to 2,000 plants per acre. Because of high demand now, those plants command $2 to $5 a piece, he said.

“When you start figuring that on a per acre basis, the numbers do start to get up there so there is a bit of risk there,” Kacerski said. “You’re talking anywhere from $3,000 to $10,000 per acre may just in seed cost, plant cost depending on where you are sourcing it from.”

There’s been some consideration toward applying for a processing license too, a move Kacerski said gives him more control.

“My feeling is that if we can raise good quality stuff and have a high oil content, we can kind of control our product and market our product. (We can) go to these retailers and say, hey look, we’re growing here locally, why don’t you sell local product, CBD oil for example, versus some of this other stuff that might be coming from China or Canada,” Kacerski said.

When growing hemp was legalized in July, the law directed the Ohio Department of Agriculture to write the rules for cultivating and processing hemp. Draft regulations are available for public comment at ODA’s website.

The goal is to have the rules finalized by early January, but first they must be reviewed by the state’s Joint Committee on Agency Rule Review, which reviews proposed new, amended and discarded rules from state agencies for fitness.

The law follows in the footsteps of U.S. lawmakers who in 2018 legalized hemp cultivation by removing it from the list of federally controlled substances, but rather, treating it like any other agricultural crop.

Ohio’s law changed the definition of marijuana to exclude hemp, defined as cannabis containing no more than 0.3 percent THC, the psychoactive ingredient that gets people high.