Resident not missing a beat 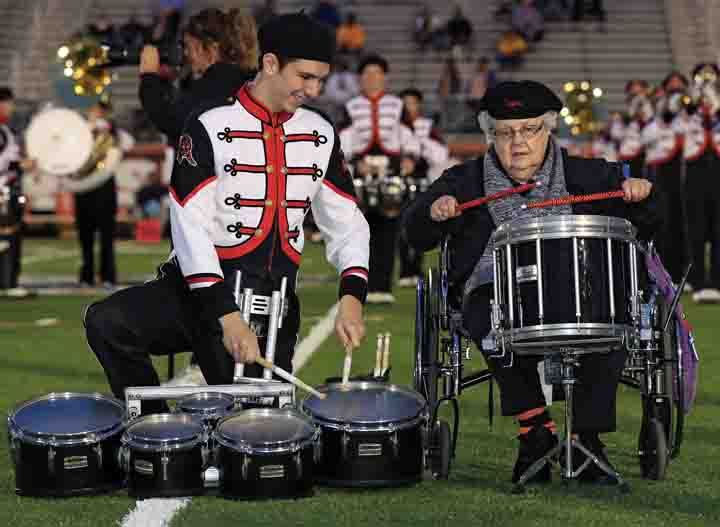 HOWLAND — The joy in 86-year-old Nancy Bollenbacher’s eyes was visible when she was wheeled onto the football field at Howland High School on Friday night.

She got to fullfill one of her lifelong dreams of playing a musical instrument with a band. In this case, it was the Howland marching band, and her accompanist was 17-year-old band member Raymond Murray.

The excitement was heightened because it was Howland’s homecoming game, where the homecoming king and queen were crowned.

Murray, a senior, previously said he has enjoyed playing the drums since he started in band in fifth grade. Now he takes his drumsticks to Shepherd of the Valley in Howland, where he pounds out the beat with residents of the facility.

It’s a concept known as cardio drumming. Large exercise stability balls are fitted onto mounts — in this case, overturned chairs — and fitness class members keep the beat to up-tempo music while dancing around their stability ball “drums” for a full-body cardiovascular workout.

Bollenbacher, a resident of Shepherd of the Valley, said she has always loved music. So no resident was more excited than she to be part of a program called Second Wind Dreams, which makes the drumming program possible.

It seems she was in the right place at the right time.

“Ray gave me a chance to make believe I was playing a real drum. We’d play on big balls,” Bollenbacher said. “I looked forward to it.”

She always loved the drums and music in general.

“When I’d go to Packard Music Hall, I’d always look at the drummer,” she said.

In fact, years ago when she listened to the radio, she’d bang out beats on a Quaker Oats container.

“My favorite band is the Bee Gees,” she said. “And I used to watch videos on MTV when it first came out.”

When Bollenbacher was on the field, she was wearing Howland’s orange and black colors, including a black beret like the rest of the band members wear.

“It was exciting getting ready and wearing all this Tigers stuff,” she said.

When she first went on the field, though, she admitted it was a little scary.

“Seeing all those people in the stands was a little overwhelming. But it was really nice, and it made me feel good,” Bollenbacher said.

Murray chose this project to fulfill one of his National Honor Society service requirements.

“This project allowed me to combine my hobby of drumming and helping other people,” he said.

He helped Bollenbacher right onto the football field to play snare drum. After the band finished warming up the crowd, they split into formation, and Murray and Bollenbacher were center stage. The band backed them up in a spirited rendition of “Eye of the Tiger.”