Peninsula area getting a makeover 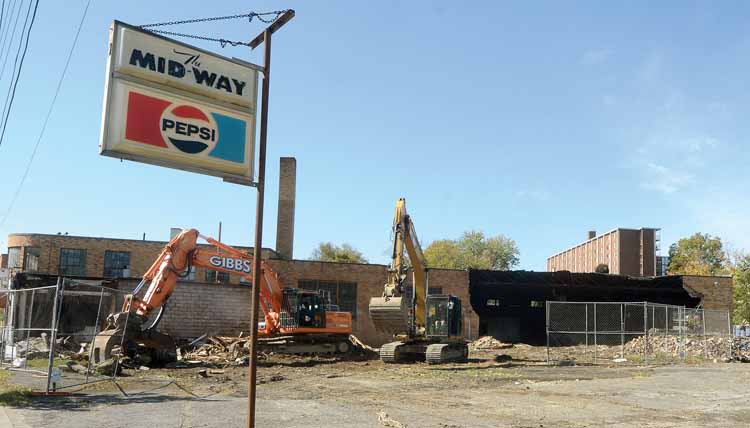 WARREN — A West Market Street building that once housed a public transportation service and bus garage started to come down Monday.

The Trumbull County Land Bank used the building a while to store salvage materials from housing demolitions, and individuals have used it illegally over the years to store tires.

The building, located at the corner of West Market and Buckeye Street NW, is also attached to the building that formerly housed the Carpet King Factory Outlet at 570 W. Market St. The former carpet building will remain.

The structures are on the western-most end of an area formed by a thumb-shaped bend in the Mahoning River known as the Peninsula, which has been identified as an area of significant future growth and revitalization, Franklin said.

It’s a “dilapidated building that has not been used in three decades,” Franklin said. The $37,000 cost of the demolition is coming from federal Community Development Block Grant funds.

The demolition is the eighth involving a commercial structure this year, the mayor said. There are more buildings on the Peninsula that will be torn down, but officials don’t want to specify which ones or when to avoid vandalism, Franklin said.

Warren Redevelopment and Planning and the Trumbull County Land Bank own the buildings to be torn down later. The former bus garage is in bankruptcy, Franklin said.

Tribune Chronicle community columnist Don Mumford wrote in 2015 that the name of the public transportation company was Warren Transportation Co.

Mumford said it received that name in 1933 when the assets of the former West End Traction Co. were turned over to 15 of its employees, including Mumford’s father, who was named general manager in 1935 and held the position 34 years. The bus garage and offices at 538 W. Market St. were built in the late 1940s, Mumford said.