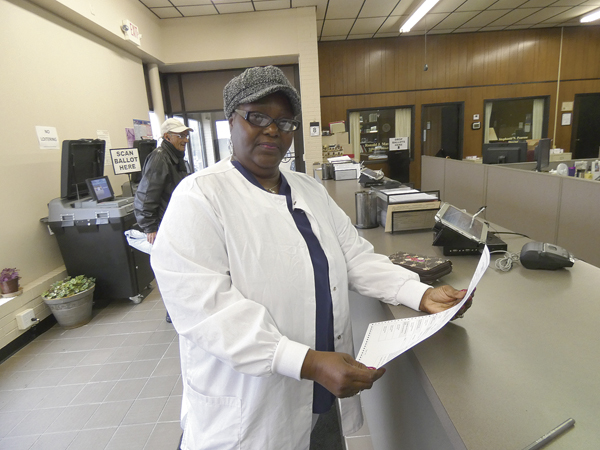 Quantina Thomas of Warren was among the first voters to cast a ballot in Trumbull County Wednesday, the beginning of early voting.

WARREN — Quantina Thomas of Warren was among the earliest voters in Trumbull County saying she did so because it’s important to vote and she wanted to get it done.

Thomas was at the board of elections about 9 a.m. Tuesday — the first day for early voting in the Nov. 5 general election.

“I usually do it early, sometimes on the first day,” she said. “I decided to get it done early before I get too busy. One voice makes a difference.”

Thomas urged those eligible to vote to cast ballots.

“It’s important,” she said. “If you don’t vote, you don’t have an opinion on what’s going on in the community.”

There was little to no waiting to vote at the board office, 2947 Youngstown Road SE.

Ray Placer of Niles also voted at the board Tuesday.

“I vote early to get it over with,” he said. “It’s one less thing on my to-do list. There’s not much on the ballot, but you’ve got to exercise your right to vote. If you’re going to complain, you’ve got to vote.”

Voting on the first day is something he’s done for several years.

“I want to make sure I do it and then I can move on to other things,” he said.

Robert Duncan of Warren came in on the first day of early voting to check to see if he was registered. He moved from Cuyahoga County two years ago. He had to vote provisionally because he didn’t change his address.

“I thought I changed it, but I didn’t receive anything (telling me about it),” he said. “I wanted to get voting done and check if I was eligible to vote.”

Turnout for the election is expected to be poor in Trumbull and Mahoning counties.

Turnout on Tuesday in both counties was light.

“It’s been very slow,” said Thomas McCabe, deputy director of the Mahoning County Board of Elections. “We’re not expecting a lot of voters during the first couple of weeks. Some of the people who voted (Wednesday) work in the building or are handing out literature” for candidates.