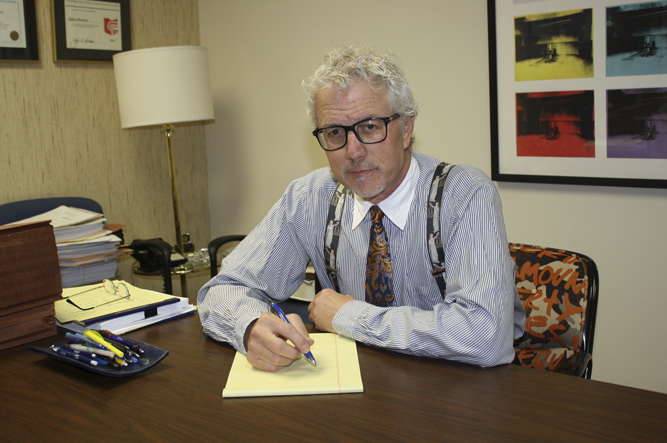 WARREN — The motive might be innocent enough: A patient seeing his or her doctor finds it difficult to understand all of the instructions and medical information and wishes there were a way to record the conversation to replay later.

The patient trusts the doctor, but wouldn’t it be helpful to record the conversation to aid in researching medical issues later on their own?

There seems to be no clear consensus in the medical literature for how doctors should handle being recorded, but several sources provide suggestions, and local attorney Jeff Goodman has advice for patients.

Today, most people have a cellphone that can record a conversation. It can do so without others knowing the conversation is being recorded.

But is recording a doctor’s visit appropriate? Is it legal?

In medical journals, concerns are often raised about how a patient-generated recording might affect the patient-physician relationship and the possibility of malpractice lawsuits, “whereas patients typically react positively to the idea,” according to an April 2018 newsletter published by the American College of Physicians.

“In general, patients should ask permission to record, and it would probably behoove doctors to set some ground rules, such as no videotaping during sensitive parts of the physical examination, such as a pelvic exam,” Dr. Timothy P. Lahey, an associate professor at the Dartmouth Institute for Health Policy and Clinical Practice, told the publication.

But physicians shouldn’t worry too much about being recorded without consent, he said. “If you are behaving in a way that makes it so you have nothing to hide, then you might feel a little put off by the fact that you’re being secretly recorded,” Dr. Lahey said. “But in the end, is it really that big of a deal?”

Although Dr. Lahey said he’s never declined a patient’s request to record, he gets the sense that his young patient population may be doing so in secret. “They all have their phones out on the desk, so my guess is sometimes those things are on and that’s fine,” he said, even though he practices in New Hampshire, where the law requires consent of both parties to record.

The consequences of violating the law can be severe, according to a July 2017 article in the Journal of the American Medical Association.

“Typically, it is a felony to make unauthorized recording, and affected parties also may seek damages from the person who made the recording, including compensation for harm, attorney’s fees and other costs. Disseminating the recording may be an additional violation,” the article says.

Marla Fraelich, executive director of the Mahoning Valley Medical Society, said she is not aware that any of the organizations her members work for have policies regarding patients recording their doctor visits.

“As of now, it has not been an issue,” she said. The organization’s offices are in Canfield.

Most of her members are physicians who work for the major hospital systems in Mahoning and Trumbull Counties, she said.

Jonathan Fauvie, Mercy Health spokesman, said he does not believe the organization has a policy on it.

One Warren physician’s office has a policy prohibiting taping or photographing the physician or any part of the exam without written approval from the doctor.

Though Ohio law allows a patient during a doctor’s visit to record their conversation without the doctor’s permission, there could be consequences.

Warren attorney Jeff Goodman said a doctor who has a policy prohibiting secret recordings is saying, “If you want to be my patient, you’re going to sign this agreement that you acknowledge my policy is no recording of the conversations. Whether it’s legal or not, whether you have the right to do it or not, we’re agreeing in this relationship that you will not record the conversations.”

He said the consequence for a patient who proceeds with a recording anyway would be that the doctor could say, “OK, I’m terminating our relationship for violating our policy.'”

Ohio is one of 39 states and the District of Columbia in which only one of the two parties to a conversation has to be aware that the conversation is being recorded.

“As long as I am recording a conversation I am having with someone, that’s perfectly legal,” Goodman said.

In the other 11 states, including Pennsylvania and Michigan, both parties must be aware of the recording.

A survey carried out in the United Kingdom found that 15 percent of the general public indicated that it had secretly recorded a doctor’s visit, JAMA reported.

In his law practice, Goodman said people will sometimes ask him, “Do you mind if I record this?”

Goodman said he has had clients who asked him if it would be appropriate to record a conversation in cases of estranged spouses or child custody.

Goodman said he advises people that a recording may not be the “silver bullet” that wins an argument or gets the person what they want.

“Even though you may get what you think is good evidence on that recording, judges and juries don’t like secret recordings, especially juries,” he said.

“Unless you are getting the silver bullet, the confession that is going to turn the case around, a lot of times you do more harm than good because you make yourself look sneaky when you whip out a secret recording in front of a jury.”

Goodman said the prevalence of people knowing how to use their cellphones to record audio and or video has increased “exponentially” in recent years. Goodman said he just assumes he is being recorded.

“Ten years ago I think recording a conversation required a definite premeditated effort on somene’s part,” he said. “These days, everybody is carrying around a recording device all of the time. These days it’s a potential spur of the moment decision. I am just going to punch this one button on my phone and I am recording. It requires no planning now.”