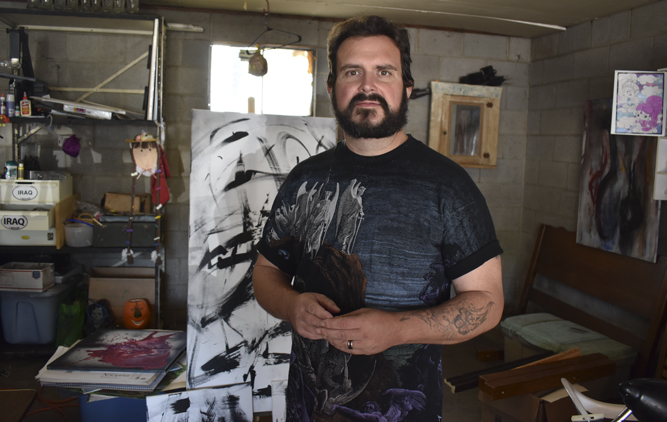 NEWTON FALLS — Jacob Hostetler left his mark during his time in the U.S. Army and the Army National Guard when his artistic designs were selected for various projects, leaving evidence of his work well after his departure from places like Iraq and Panama.

Hostetler joined the Army in 1998 as an infantryman and in 2002 transitioned to the Army National Guard as a combat engineer. He left the service in 2008.

“I always wanted to join,” Hostetler said, but first he earned an associate degree after studying visual art.

Over a summer in Germany, he put in new sidewalks, and in Panama he helped build schools and roads, Hostetler said.

During an 11-month tour in Iraq in 2003 and 2004, Hostetler said he probably had a better chance of getting shot in Youngstown than there — although he missed the taste of “real” pepperoni. On one mission, they gave out shoes and medical aid to a village while the children asked for candy and tried to sell him and other servicemembers knives.

But when he was attached to a unit looking for improvised explosive devices in an area traveled by military vehicles, he had a close call or two.

“There must have been a guardian angel,” Hostetler said.

An explosion rocked a Humvee Hostetler was a rifleman in, but luckily the vehicle had been reinforced by then. At the beginning of the war, explosions like that were killing military members because their vehicles weren’t adequately protected from blasts from underneath the vehicle.

Hostetler painted whatever he could while he was deployed, like doors and a billboard, as well as murals. In Iraq, his design for a mural was selected for a chow hall. It features three soldiers, heads down, over a coffin and a field of graves.

Hostetler was serving a 14-month tour in Korea 18 miles south of the demilitarized zone on 9/11.

“We had to get into formation every hour. Everyone kept saying, ‘We’re going to war.’ Five guys went AWOL,” Hostetler said.

Hostetler works as an artist in his garage studio in Newton Falls and as a substitute teacher and adjunct professor.

But a lot of his artistic creations were destroyed in 2017 when his family’s home caught fire, including a piece that once hung in the governor’s office.

A lot of his military memorabilia was lost, but with the help of a local lawmaker, he was able to get replacement medals.

The military brotherhood organizations he has participated in over the years and people he knew in the military stepped up to help his family replace furniture and clothing and settle into a new home.

“I couldn’t believe what they did for us,” Hostetler said, adding that local churches helped a lot, too.