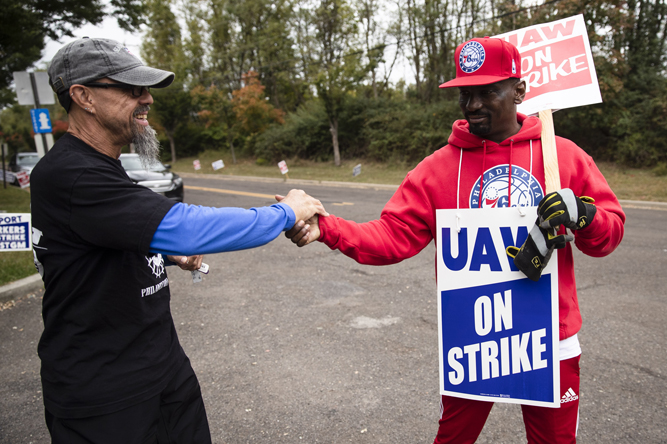 AP Picketing United Auto Workers Richard Rivera, left, and Will Myatt react to news of a tentative contract agreement with General Motors, in Langhorne, Pa., on Wednesday. Bargainers for General Motors and the United Auto Workers reached a tentative contract deal that could end a monthlong strike that brought the company's U.S. factories to a standstill.

The calls were from union members hungry for details about how the proposal positions the idled Lordstown assembly plant for the future.

“They are nervous; they are nervous about what the future holds … you don’t known what is in it. It’s been really, really tight,” Bill Adams, Local 1112 vice president, said. “We just hope we have something in the future in Lordstown,” Adams said.

But GM apparently was able to close three of four factories that it wanted to shutter to get rid of excess capacity in slow-selling cars and components. The Detroit-Hamtramck plant will get a new electric pickup truck and stay open, but the factories in Lordstown; Warren, Mich.; and near Baltimore are to be closed. The Lordstown area will get an electric vehicle battery factory, but it won’t have nearly as many workers as the assembly plant that for years made compact GM cars.

Terry Dittes, the UAW’s chief bargainer with GM, said the deal offers “major gains” for 49,000 union workers who have been walking picket lines since Sept. 16. They’ll stay off work for at least a couple more days while union committees decide if they will bless the deal. Then workers will have to vote on it.

The deal was hammered out after months of bargaining but won’t bring an immediate end to the strike by 49,000 hourly workers. They will likely stay on the picket lines for at least two more days as two union committees vote on the deal, after which the members will have to approve.

Pickets will remain outside the Lordstown plant until the deal is final.

Specific terms of the tentative four-year contract were not released, but it’s likely to include some pay raises and lump-sum payments to workers.

Early on in the talks, GM offered new products in Lordstown and Detroit. The assembly plant in Lordstown went idle in March.

Adams said the Lordstown plant’s closing overshadowed, at least locally, the negotiations. Local 1112 members since Sept. 16 have picketed outside the 6.2 million-square-foot facility that produced the Chevrolet Cruze — once one of the brand’s top-selling vehicles — for about 10 years.

“It (the plant being unallocated) was not the reason why we went out. It was health care, it was getting our temps a path to permanancy,” Adams said. “There were main bargaining issues we had to deal with. Allocation was just a byproduct of it.”

Leading up to the start of talks and through negotiations, Local 1112 officials and rank-and-file members held hope UAW bargainers would be able to secure a new vehicle for the shuttered Lordstown plant.

In May, GM announced it was in talks to sell the plant, a move that would need UAW approval. Negotiations between the automaker and fledgling Lordstown Motors Corp. appear to be continuing. As recently as last week, LMC’s CEO, Steve Burns, said he’s targeting a production start date of late 2020 for the battery-powered pickup that’s been named Endurance.

Before they left, they were visited by several members of IUE-CWA Local 717 at APTIV in Warren, a spinoff of the former Delphi, to deliver a $2,000 donation to support Local 1112 strike efforts.

The money was raised among the about 580 members of Local 717.

“We see what they are going through, the struggles and we just wanted to come out and help,” Kevin Thomas, Local 717 president, said. “I know they would do that for us.”

The strike had shut down 33 GM manufacturing plants in nine states across the U.S., and also took down factories in Canada and Mexico.

It’s unclear if GM will be able to make up some of the production lost to the strike by increasing assembly line speeds or paying workers overtime. Many GM dealers reported still-healthy inventories of vehicles even with the strike.

If all of the committees bless the deal, it’s likely to take several days for GM to get its factories restarted.

The deal now will be used as a template for talks with GM’s crosstown rivals, Ford and Fiat Chrysler. Normally the major provisions carry over to the other two companies and cover about 140,000 auto workers nationwide. It wasn’t clear which company the union would bargain with next, or whether there would be another strike.