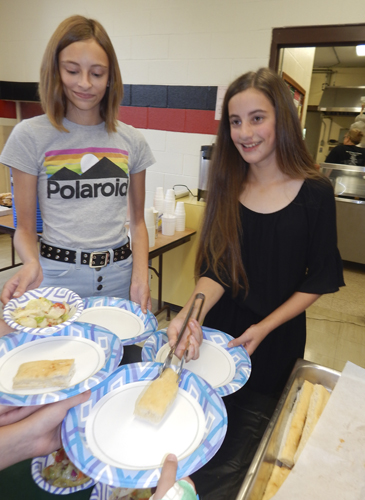 Staff photo / Bob Coupland Bloomfield High School seventh-grader Gianna Davis, 12, of Orwell, at right, and her cousin, Grace Lagerstedt of Concord, help serve salads, bread and pasta Tuesday at a fundraiser at the school to help Davis and her family with medical expenses.

BLOOMFIELD — Friends, family, community members and staff and students from the Bloomfield-Mespo school district came together Tuesday to help raise funds for a student recovering from a dog attack last month.

A benefit spaghetti dinner was held at the school, with proceeds going to the family of seventh-grade student Gianna Davis, 12, of Orwell, to cover medical costs following surgeries she has had or will need after suffering serious injuries to part of her face after being attacked by a neighbor’s Great Dane.

Scott Davis said his family appreciates all the help and support.

“What people have done has been wonderful and very appreciative,” he said.

Ciara Davis, 22, said her younger sister and the school staff organized the dinner and the family has set up Gianna Emergency fund on Facebook for donations.

“We are not sure what other medical treatment Gianna will need. She has already had some surgery and has been healing slowly. Not only has the school helped out, but many in the community have reached out,” she said.

Scott Davis said Gianna was at friend’s house on Sept. 15 in their neighborhood when she was attacked by the neighbor’s Great Dane.

“I had just gotten home when the ambulance with Gianna inside was leaving. She had run home after the attack and 911 was called,” he said.

Scott Davis said Gianna will have follow-up treatments and appointments on nerve and muscle damage.

“There was a lot of nerve and muscle damage done to her face. She will need special surgeries to address this,” he said.

He said the neighbor’s dog has been euthanized.

Gianna returned to school on Monday after being off two weeks.

“This is her first year at the school since she was homeschooled,” Ciara said.

Gianna said Monday it was nice to be back at school and see all her classmates.

She said she also is looking forward to getting to ride her horse, Cinammon, again but has to wait following the surgeries.

Jill Lagerstedt of Concord, Gianna’s aunt, said her family and others came to provide support.

“She has been improving in the past weeks. She was very bruised and scarred right after it it happened. She looks better,” Lagerstedt said.

Helping at the event was Callyn Lagerstedt, 13, of Concord, a cousin of Gianna, who said she is glad Gianna has been improving and is able to do more. She assisted at Tuesday’s event by serving food.