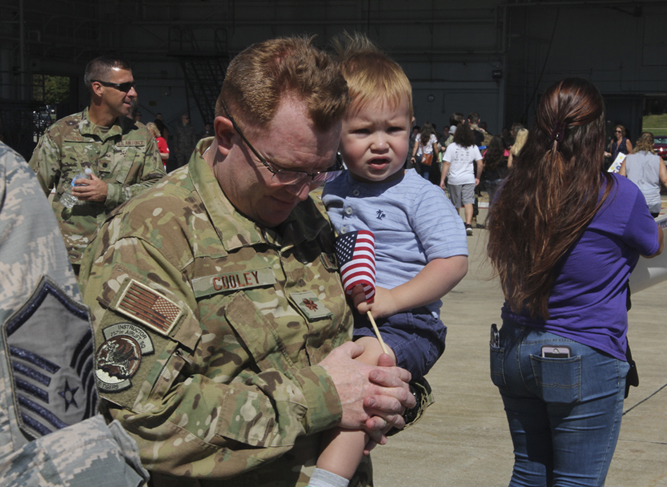 Staff photo / Allie Vugrincic Maj. Ryan Cooley of Geauga holds his son, Bryce, 1, after returning from deployment. More than 50 airmen and airwomen from the 910th Airlift Wing at the Youngstown Air Reserve Station in Vienna returned Wednesday from a 120-day deployment to southwest Asia as part of U.S. Central Command operations.

VIENNA — Families of the more than 50 airmen and women who were deployed for 120 days in southwest Asia eagerly watched the landing of four C130-H Hercules cargo aircraft carrying their loved ones Wednesday afternoon at the Youngstown Air Reserve Station.

The Air Force Reservists are some of 130 citizen airmen who were deployed in support of U.S. Central Command operations. The returning members of the 910th Airlift Wing airlift support logged more than 960 hours of combat flying hours, 235 combat missions and 516 combat support missions during their four months overseas.

Families came bearing signs and bouquets of flowers, welcoming home parents or children, and even pets who were as excited as their human counterparts. It took the reservists three days of flying about seven hours a day to get to their destination in Vienna Township.

For some, like Staff Sgt. Nicholas Orcutt, it was the first time being deployed — though in Orcutt’s case, the military lifestyle was hardly new. Orcutt, 22, said his parents, Chief Master Sgt. Dennis Orcutt and now-retired Air Reserve Public Affairs officer Polly Orcutt, were often deployed or moving around.

“Growing up with both of them being in the military, we’re used to being separated,” said Nicholas Orcutt.

Polly Orcutt said Nicholas attended 12 schools in four states as they traveled from base to base in Georgia, Florida, Alabama, and Oklahoma City, before settling more recently in Howland.

“No place is really home,” said Polly Orcutt, who comes from Ohio originally. She said at first, Nicholas had no intention of following in his family’s military footsteps.

“When Nick was really young he wanted nothing to do with the military,” said Polly Orcutt. She said when he was about 12, that changed — now, Nicholas is studying at Youngstown State University and enrolled in Kent State for Air Force ROTC with the intention of graduating as an officer and becoming a pilot.

Polly said Nicholas was particularly interested in going on the mission to southwest Asia so he would have experience on the ground before he became an officer.

Nicholas Orcutt said he flew about 41 combat missions in four months, and the practice improved the skills he learned at basic training and in the reserves.

He said the airmen had a lot to do, including moving cargo and passengers and providing areomedical support in combat areas — oftentimes in desert temperatures near 130 degrees Fahrenheit.

Because he was deployed to the same place Dennis Orcutt had last been deployed, they were able to compare what had changed and talk about the area. The family said because of modern technology, they were able to keep in touch, and even speak face to face over video-chat.

Dennis Orcutt, usually stationed at the Pentagon, took leave to welcome his son home. Dennis said Nicholas’s deployment was a “proud thing.” Nicholas was also greeted by Polly and his grandparents, with his two younger siblings opting not to leave school for the day.

Nicholas Orcutt said he looks forward to being reunited with his dog, visiting family and friends, and enjoying some home-cooked food and returning to school to finish his education.