First slate of shows to be announced Monday 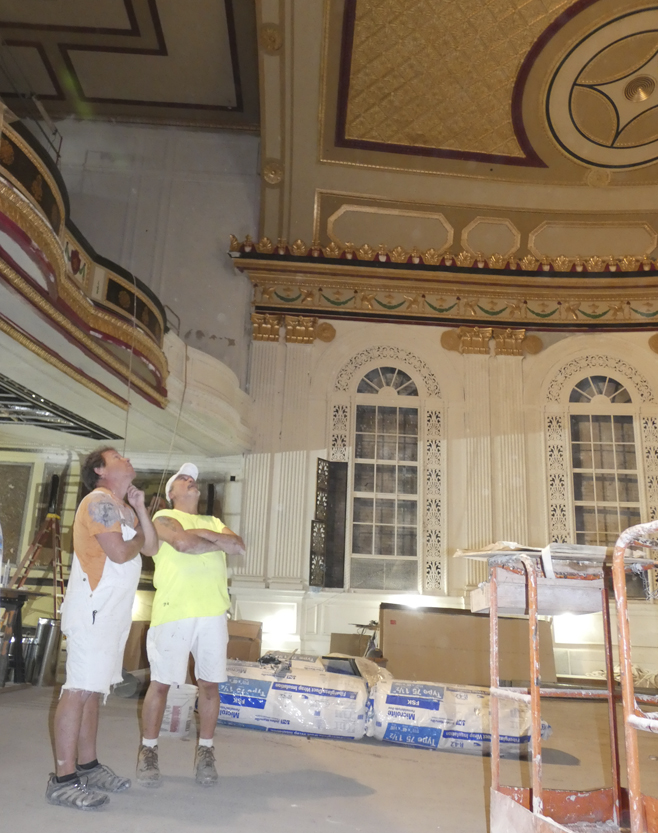 Staff photo / Andy Gray From left, Sean McNicol of East Liverpool and Harry Leith of Girard check out the progress on painting the ceiling of the Robins Theatre, which will officially reopen on Jan. 9, 2020, at 160 E. Market St., Warren.

WARREN — The marquee for the Robins Theatre will be installed in early October.

That’s one of the final developments the public will see before the downtown theater that’s been closed for 45 years celebrates its grand reopening, announced for Jan. 9, 2020.

A news conference Monday to announce the first slate of shows will be the last time the 1,350-seat theater is open to anyone who doesn’t work for owner Mark Marvin and his Downtown Development Group or promoter Sunrise Entertainment.

Part of the reason for the lockdown is practical, Marvin said. It’s an active construction site. It’s a risk for curiosity seekers who wander into the building, and it’s a distraction from the work that needs to be done.

The other reason for the lockdown is show biz.

“We want that ‘wow’ factor when they get to see it for the first time,” said Sunrise founder Ken Haidaris.

Marvin added, “There will be teases on Facebook, little pictures here and there with updates on the progress. But we want everybody to see it for the first time at that time.”

Progress on the theater was delayed some over the summer when Marvin pulled crews to complete work on the former SCOPE Center, which Downtown Development Group also owns, for the opening of CharBenay’s Wine on the River. Marvin said they are a week or two behind schedule, but he was confident everything would be completed on time.

“It’s not in bad shape, but it still looks like a chaotic mess,” Marvin said.

The theater’s main doors were being installed Thursday and Friday. The heating and air-conditioning units will be installed this week. The marquee is in Cleveland and also will arrive this week.

“I anticipate installation in the first, second week of October, and it will run the same countdown (to opening night) that’s on the website,” Marvin said.

The box office, which is located to the right of the main doors when facing the theater, will be open starting Friday when the initial shows go on sale.

“You’ll be able to buy tickets physically at the box office and online,” Haidaris said.

Tile work for the restrooms is complete, and toilets, sinks and other hardware are in the building ready for installation. Painting continues on the ceiling, and most of the plaster work is done.

Nearly everything needed for the restored theater, from the rigging and lighting for the stage to the brass railings for the balcony, has been ordered, and most of it is on site or in storage, Marvin said.

Restoration work on the seats is finished.

“We’ll be ready for the seats to come in on Nov. 1, and it will take about 10 days (to install),” Marvin said. “The carpet’s already in the warehouse, and we’ll bring the carpet out when the seats are done. … The bling will go in during the month of November. Once we do that, it will be ready to rock ‘n’ roll, literally.”