Valley districts handwrite their own rules 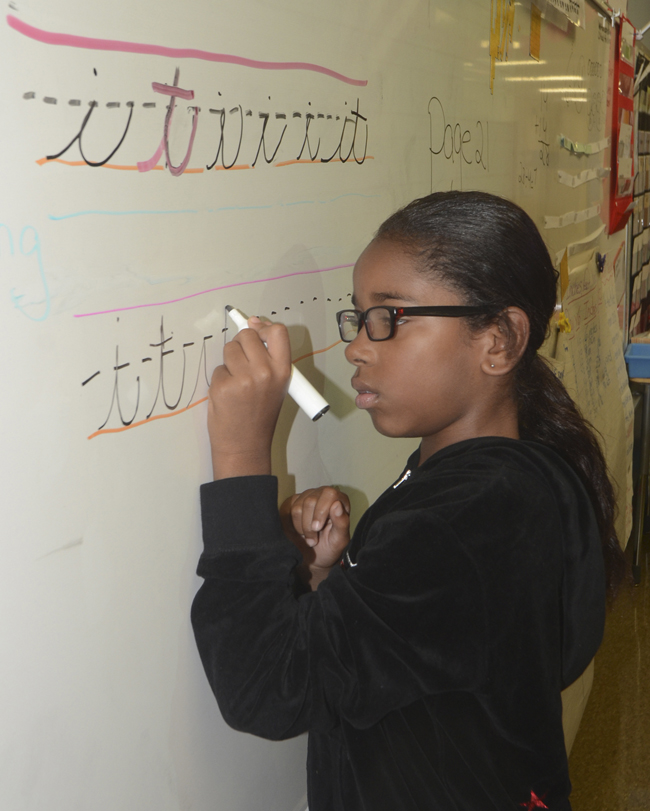 Staff photo / R. Michael Semple April Winkfield, 8, a fourth-grader at Jefferson PK-8 Elementary School in Warren, practices her cursive letters at the whiteboard. Warren schools made the decision to implement direct teaching of handwriting during the 2018-19 school year.

WARREN — Teaching cursive handwriting has not been a requirement for Ohio school districts since 2010, but Warren schools made the decision to implement direct teaching of handwriting during the 2018-19 school year, according to Jackie Lawrence, literacy coordinator of the district.

“The district reviewed recent research that says that handwriting instruction supports students’ cognitive development and affects overall academic achievement,” Lawrence said. “In the primary grades, K-1 teachers have always demonstrated to students how to form letters. This has always been an expectation.”

Last year, outgoing Gov. John Kasich signed a law that required the Ohio Department of Education to create instructional materials for cursive writing through the fifth grade. However, the law stopped short of requiring schools to teach it.

Lakeview Elementary Principal Scott Taylor said the teaching of cursive was never completely out of the curriculum at the school, but he has seen a resurgence in teaching it because of passage of the law.

“With the state board of education directive, I believe it is awakening every district to consider simply requiring it,” Armstrong said. “I’ve met with my principal, who discussed the implementation with our teachers. It likely will take about a year to get the program fully implemented.”

Armstrong emphasized that many of his elementary teachers already have experience instructing students on how to write and read in cursive.

“Both personally and professionally, I believe schools should be teaching cursive writing,” Armstrong said. “I’ve worked in the private sector and saw the need for it there. If people do not write well in cursive, how are they going to do simple things like write checks or sign legal documents?”

Other area school districts are looking at placing a greater emphasis on teaching their students to read and write in cursive style, even if the skill is not a required part of their curriculum.

Struthers schools Superintendent Pete Pirone said the board of education has discussed about requiring the teaching of cursive writing.

House Bill 58, which was signed by Kasich, does not have a requirement that districts and / or teachers provide cursive writing to students. The Ohio Department of Education, though, is commissioned to have instructional materials and other support resources available to those districts that choose to include cursive writing as a part of their curriculum.

Youngstown schools decided to require all elementary students to have at least 10 to 15 minutes minutes per day of instruction that focuses on handwriting.

“Many of our teachers have asked to bring back cursive handwriting to our curriculum,” said Jennifer Walker, deputy chief of core curriculum with Youngstown schools. “Our teachers have said — and the research has shown — there is a definite connection with handwriting skills and students’ ability to write essays and do creative writing that is not the same when they are using other devices.”

Walker described this as being the district’s pilot year with the program.

“Each grade level will have a different emphasis,” Walker said. “As we move forward, we may de-emphasize cursive handwriting in the fourth and fifth grade years, but during the first few years we believe it is needed — because the upper grade students did not have cursive writing instruction emphasized.”