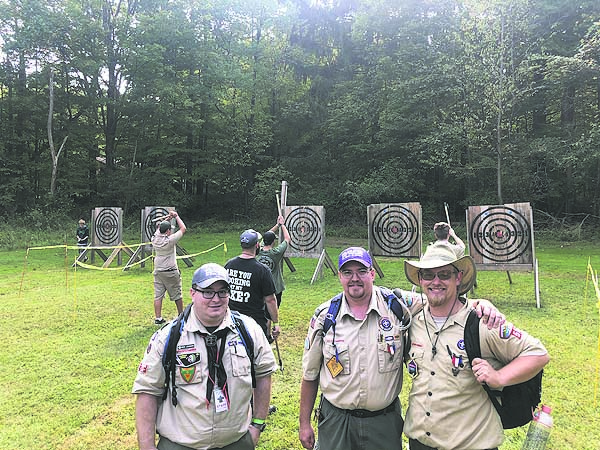 CANFIELD — Boy Scouts gathered at Camp Stambaugh this weekend to celebrate its 100th anniversary with a parade and many outdoor skill events and exhibits.

Brad Lang of Weathersfield, Scoutmaster for Troop 83 from Mineral Ridge, described the event as a “beautiful festivity.”

A few of the many activities Saturday were archery and tomahawks, leather crafts, fishing, canoeing, climbing, knot tying and branding / blacksmith exhibits. The troops assembled in the morning for a parade.

Briscoe Poor of Brunswick has been a Boy Scout for five years. “It’s really a celebration of what this camp has done to the people in the area.” He also said he enjoys “learning about the different things that scouting has to offer.”

The canoeing activity proved popular. Each Scout who canoed participated in a competition that was set up similar to an obstacle course with buoys that had to be navigated. The event was timed.

An opening ceremony and dedication of new gateways to Stambaugh also were part of the morning’s agenda. The event concludes today.

Poland resident Kent Hilderbrand is part of Troop 101 in Struthers and headed an activity that demonstrated what a campsite should look like.

“It’s called the Eagle Encampment. All the boys working this are Eagle Scouts. So what we have here is, all the tents are set up in the ideal manner that, you know, you have a center meeting ground so that everything’s central to camp,” Hilderbrand explained.

“We’re also doing cooking demonstrations. We have a roast going in a Dutch oven. We’re making doughnuts, and we’re also making a cobbler.”

Troops were encouraged to look at the Eagle Scout medals on display. Some are from 1912, which is when the first medal was presented — just two years after the inception of the Boy Scouts.

One award the National Eagle Scout Association has bestowed is the Distinguished Eagle Scout Award. According to Kirtland resident John Krauss, who is Scoutmaster for Troops 562 and 280, “You had to be an Eagle Scout for 25 years and volunteer during that time and make some significant improvement in your line of work, like Robert Gates or Stephen Spielberg.”