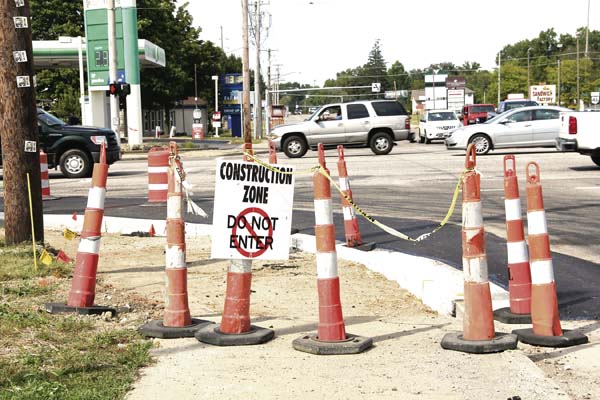 Construction at the corner of Mahoning Avenue and State Route 46 in Austintown has been causing fluctuating traffic patterns that limit access to some businesses in the area. Photo by Allie Vugrincic

MINERAL RIDGE — Joel and Penny Johnson, owners of Pho Viez on state Route 46, say business has dropped almost 60 percent since construction began along the road, limiting access to their plaza and wrecking the parking lot.

The $1.4 million Ohio Department of Transportation road widening project has kept 46 just north of 1nterstate 80 prey to varying lane restrictions and traffic jams since June — deterring customers from coming to the Johnson’s restaurant. Earlier this summer, business on state Route 534 in Newton Falls spoke of similar declines in customer traffic when a planned ODOT project closed the bridge and limited access to the downtown area.

“This is the livelihood of businesses,” said Joel Johnson. “When construction messes with that, they should compensate somehow.”

The Johnsons, who have owned Pho Viez since January 2018, had to lay off three employees and have cut back other employee’s hours to accommodate for the loss of customers. They were planning to open a pizza restaurant in the next storefront over, but had to put those plans on hold when business declined.

“We were building very well, then everything tumbled all at once,” Joel Johnson said. He said now they have to build back up from the bottom.

Penny Johnson said at times both entrances to their plaza have been closed or blocked by construction, causing customers to call and ask how to get to the restaurant. Joel called ODOT in July asking if they could work in the evenings or less busy times of day to help the restaurant, but received no real response, Penny Johnson said.

The restaurant’s travel traffic from the highway dropped from around 600 people last summer to about 100 this summer, Joel Johnson said. He said the restaurant also took a hit when General Motors in Lordstown closed in March, as many of its customers moved out of the area when GM sister companies such as Falcon Transport shut down.

Penny Johnson posted on Facebook an alternate route using back roads to get to the restaurant, she said, but the path is not efficient, especially for a lunch crowd with limited time. Customers have also been unhappy with the state of the parking lot, which Penny said has been “torn up” in the construction effort.

Across the county line in Austintown, more construction on state Route 46 at Mahoning Avenue is also causing accessibility problems for area businesses and their customers. Stacy Teski, manager of Austintown Belleria, said they have started adding 15 to 20 minutes to delivery orders to accommodate the “traffic roulette” and construction which regularly takes Mahoning Avenue down to one lane.

The $700,000 ODOT widening project, will add right-hand turning lanes to Mahoning Avenue eastbound and state Route 46 northbound, according to ODOT documents. It’s scheduled to be completed in late October.

“The endgame is supposed to be better but the right-now game sucks,” said Teski. She said the persistent ODOT orange barrels sometimes make it look like it’s impossible to pull into Belleria’s parking lot.

The Austintown Belleria has been under new ownership since May, and Teski said she worries the traffic problems are causing the restaurant to lose traction with its customers.

“Traffic should not be our problem,” said Teski.