Area residents could have safer trails by 2020 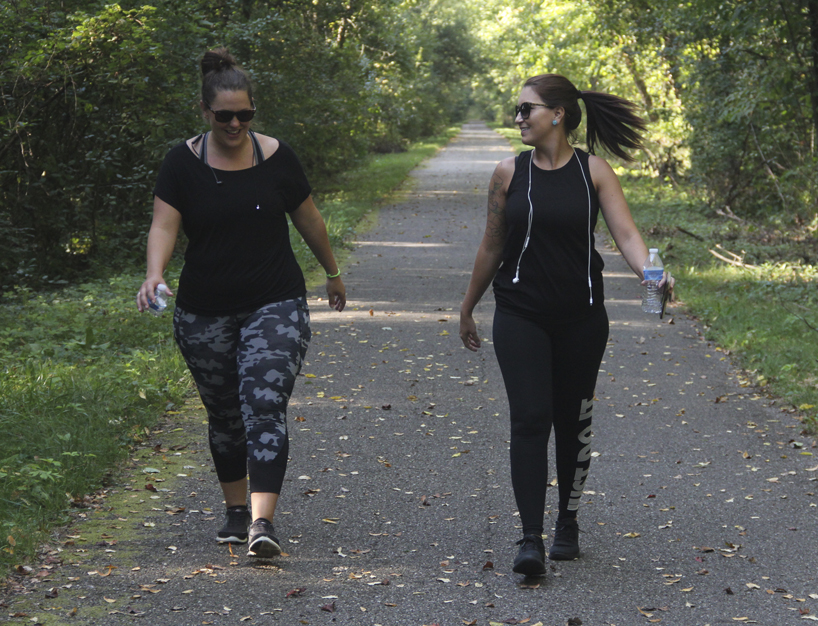 Staff photo / Allie Vugrincic Brittany Stroup of Howland, left, and Jennie Prokay of Champion chat while they walk on the Western Reserve Greenway Bike Trail near the Sunside Trailhead in Champion on Saturday.

CHAMPION — Music legend Freddie Mercury of the band Queen would have inspired most bicyclists with the lyrics of the song “Bicycle Race” — “I want to ride my bicycle. I want to ride it where I like.”

And that’s exactly what bicyclists from Pittsburgh did. They rode their bikes where they liked by taking the 40-mile Sunside Trailhead in Champion to Ashtabula County.

The group of 10 friends, who mostly connected through the website meetup.com, also are avid swing dancers. “We are active older adults,” Leslie Surmick said.

The riders are extremely appreciative that the trail is paved. That’s not always the case, said Donna Prekup, who organized the ride.

Though the group was looking forward to its ride, Prekup said it was very hard to find a map of the trail from beginning to end. “I would suggest making a clear-cut map of the trail,” she said. “We’d also like to know where the bed and breakfasts are located.”

The group stayed at the Fairfield by Marriott in Niles.

The Ohio Department of Transportation has a solution to the group’s problem. ODOT is urging citizens to give feedback for a walking / bicycling policy it is developing, called Walk.Bike.Ohio.

Those who choose to voice their concerns and provide feedback should visit the Walk.Bike.Ohio website, which is part of the ODOT site. This developing policy will guide Ohioans’ bike and pedestrian transportation policies and investments in infrastructure. ODOT is also going to have a series of stakeholder meetings, which will also help it collect feedback on the plan. This includes the barriers of the policy as well.

“We encourage Ohioans to use active transportation, meaning walking and biking,” said Jack Marchbanks, ODOT director. “We want to make sure those modes of travel are as safe as possible.”

Between 2009-2018, Ohio saw a 60-percent increase in pedestrian-related fatalities, with bicycle fatalities going up 22 percent in the same time period. In 2018, 135 pedestrians and 22 bicyclists were killed in this state.

“The parks have limited resources and funding, and we have needs throughout each park,” said Zachary Svette, Trumbull County MetroParks executive director. “ODOT’s initiative will be greatly appreciated.”

Svette explained it’s almost impossible to construct anything beside what the parks’ staff is doing now due to funding issues. “There have been proposed bike trails in other parts of the county, but funding is the major issue,” he noted.

Trumbull County has nine parks, all of which have hike, walk and bike trails.

“We hope to get feedback from Ohioans all over our state to help us ensure safety for the cyclists and walkers,” Marchbanks said. ODOT projects the final report on Walk.Bike.Ohio will be completed in 2020, which will include policy recommendations as well as an implementation plan as to how to achieve the recommendations.