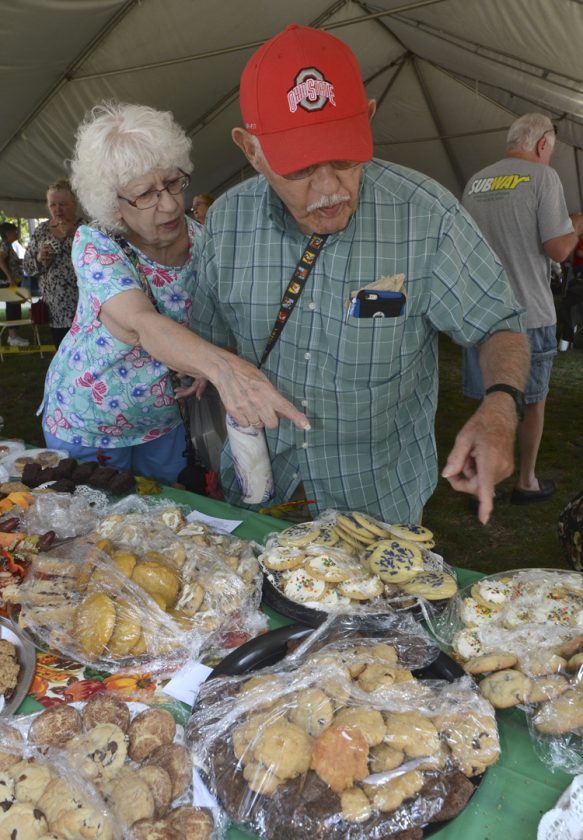 Staff photo / R. Michael Semple Sue Marvin of Warren, left, and her husband, Carson, pick out pastries at the Blessed Sacrament Church station during the annual Taste of Warren event Saturday at Courthouse Square. The food event was part of the fourth annual Warren Homecoming weekend.

WARREN — Rylie Rieser’s favorite Alicia Keys song is her 2009 hit “Unthinkable,” though it was anything but unthinkable to imagine her enjoying a few homemade foods on Saturday.

“I had a veggie taco and a strawberry-banana smoothie,” the Warren G. Harding High School freshman said.

Before partaking of her meal, Rylie was using her voice as a member of New Tomorrows, her school’s choir for ninth- and 10th-graders. She and the other singers provided a portion of the entertainment for the annual Taste of Warren gathering Saturday afternoon in Courthouse Square.

Additional performances were from the Harding High School jazz band, under the direction of Reid Young.

Sixteen food vendors sold everything from homemade pizza to haluski during the three-hour gathering that served as the main event for the annual Warren Homecoming, which continues through today. More than 1,000 attendees enjoyed the offerings, including some recipes that have been associated with Warren for generations, noted Sue Shafer, community events coordinator for the Tribune Chronicle, which was a co-sponsor of the event.

Other sponsors were Trumbull 100 and Diane Sauer Chevrolet.

Rieser, who hopes to pursue a music career, recalled that her interest in singing developed as she was exposed to Alicia Keys’ songs. Her mother, Marci Matteo, often played the popular Grammy Award-winning R&B singer’s songs in the car, said Rieser, who sang 16 tunes with her choir for the Taste of Warren.

Tom Sunderman, a friend of her mother’s, said he was drawn to pizza from the Sunrise Inn of Warren as well as fish prepared by Ohio Inn. Both are longtime, traditional Warren recipes and an attraction for many people who have returned to the city after having been away a long time.

However, some new tastes have entered the local scene, including a variety of improvised ice-cream recipes, courtesy of Max Hoover. About three weeks ago, he opened Cockeye Creamery, named after Cockeye BBQ, a restaurant his parents, Erik and Stacey Hoover, own.

“My flavors are 100 percent unique and never done before,” said the 22-year-old science major who attended Ohio and Kent State universities.

For the Taste of Warren, Hoover had on hand a hard-serve flavor he calls buttermilk pie — which is his No. 1 seller — followed by blackberry-chocolate chunk, nearly 5 gallons of which he sold in an hour. To make the buttermilk pie, he combined in a large blender four small pies with milk, then added two more with shredded crust, giving the ice cream a rich, sweet and smooth yet crunchy taste, the 2015 LaBrae High School graduate explained.

Hoover, who has employed 12 high school students, also reaches out to local people to help create his flavors. For example, a dairy farmer from Leavittsburg sold him six pints of raspberries to which he added sugar and cooked in a stove pan before letting the ingredients cool. After that, the material was stored overnight in a cabinet at minus-30 degrees before being placed in a dipping cabin at 9 degrees, explained Hoover, who added that in many ways, his elaborate kitchen resembles a science lab.

Freshness also seemed to be at the core of potato skins with cheese, bacon and sour cream that were $1 each. Selling the items they prepared were Wilbert Collins and Sharon Walker, both of Trumbull Mobile Meals Inc., a 49-year-old organization that delivers meals to and conducts safety checks for senior citizens.

Also, several area churches offered foods such as pecan rolls for $8 per box of 10, along with sweet cabbage, potato and cheese pirogi.

“It is a nice, wide variety of food,” said Shafer, who added that pulled pork walking nachos from the Speakeasy Lounge sold out.

Even though cloudless skies and temperatures in the mid-80s greeted vendors and attendees alike, thoughts of the holiday season were on the minds of Kisha Jackson, Bridgette Smith, Lynne Villers and Jackie Shannon. The four women were holding a basket raffle to raise funds for the annual Christmas on the Square, a free holiday- and light-themed event set 5 to 8 p.m. Dec. 6 on Courthouse Square.

“We hope many people will come,” Smith said.