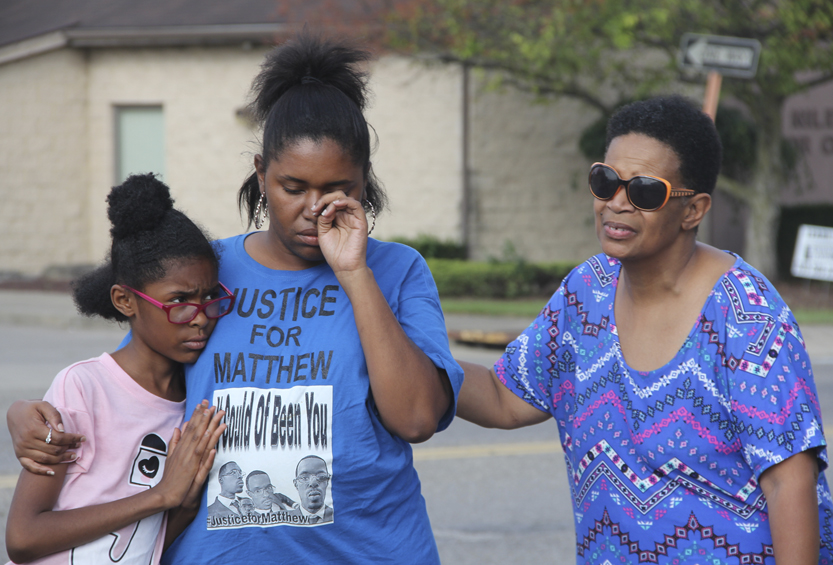 Staff photo / Allie Vugrincic Matthew Burrough’s daughter, Jayla Burroughs, 9, left, and her mother, Jennifer Cox, listen to calls for justice in his police-involved shooting death Saturday afternoon during a community event outside the Niles safety service building, while Cox’s aunt, Robin Raimey of Warren, right, tries to comfort her. The event, attended by about two dozen people, was held in response to a report released Sept. 13 by Trumbull County Prosecutor Dennis Watkins saying the two Niles police officers involved in Matthew Burroughs’ death will not face charges at the county level.

NILES — Supporters of the “Justice for Matt” campaign vowed Saturday not to back down after Trumbull County Prosecutor Dennis Watkins last week released a report saying two Niles police officers involved in Matthew Burroughs’ January shooting death will not be charged for their actions because they felt threatened.

“We aren’t going to fall away,” said the Rev. Todd Johnson of Second Baptist Church in Warren during the gathering.

“We are going to be here to the end. We have to make sure Matthew Burroughs’ name is known to the world.”

Watkins late last week turned over the 1,600 pages of investigatory materials related to the officer-involved shooting to the U.S. Justice Department, which Watkins said is “reviewing it” — but supporters of Burroughs said that is not enough.

Johnson on Saturday called for Watkins and Christopher Becker, Trumbull County assistant prosecutor, to be held accountable for the weakness of the case and what Johnson said was a conflict of interest. He and about two dozen supporters standing outside the Niles safety services building also demanded charges against Niles officers James Reppy and Christopher Mannella, who together fired eight shots at Burroughs’ car.

Burroughs, 35, was unarmed, but police officers said they feared Burroughs would use his car as a weapon against Mannella, who fired the fatal shots, according to the prosecutor’s office.

Burroughs’ daughter, Jayla Burroughs, 9, and her mother, Jennifer Cox, were among those calling for justice Saturday.

“We weren’t together when this happened, but if this was me, (Matt) would be here,” Cox said in an interview after the rally.

Wearing a shirt with photos of Burroughs and the words “It could have been you,” Cox said she wouldn’t quit until there was justice.

Jayla Burroughs said Matthew was a good father to her.

“I love him, and I came out here to support him and to ask for justice for him,” she said.

Cox said she didn’t watch the video of Burroughs’ death, released last week with the prosecutor’s findings, and she never would.

Michael Harvey read his poem “Ode to the Just Us system versus Mr. Matthew Burroughs” during the event. He said he hopes the community has the endurance to see the issue through to the end.

“It’s not over,” said Blair Floyd, who early on joined the Justice for Matt movement and in February asked Niles City Council for transparency in the case. He said he no longer feels safe in the community since Burroughs’ death.

He said right now, people of color have no reason to trust the justice system.

Johnson told supporters to make more noise so Burrough’s story is heard not only locally, but at the national level.

“Make it a hashtag, make it part of your daily life,” Johnson said. “We won’t be silenced until we get justice for Matt.”