Special to the Tribune Chronicle 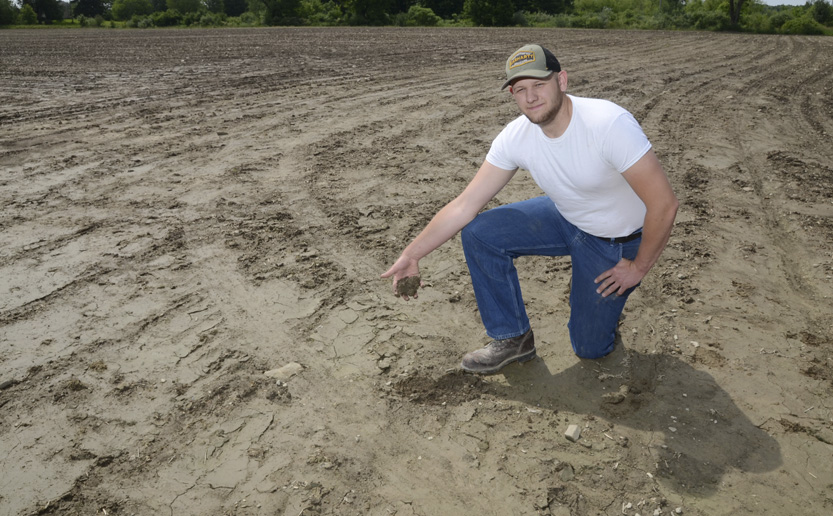 Farmer Dan Denman of Johnston holds wet soil in a corn field along Saddler Krohler Rd. that he had to replant because of the extremely wet spring conditions. File photo by R. Michael Semple

The United States Department of Agriculture has issued disaster relief funds for farmers in a number of counties across the state, but Ashtabula and Trumbull county farmers aren’t eligible to apply.

The USDA made disaster relief funds available Wednesday for Ohio farmers hit by natural disasters in 2018 and 2019. As of Friday, 63 of Ohio’s 88 counties are eligible to apply for the funds, according to Ty Higgins, director of media relations for the Ohio Farm Bureau.

According to a map provided by the Ohio Farm Bureau, the northeast part of Ohio, or any counties east of Lorain, Ashland, Coshocton and Guernsey, are not eligible.

Mandy Orahood, an Ohio Farm Bureau organization director serving Ashtabula County, said she was very surprised Ashtabula and Trumbull counties weren’t included. In July, a dam in Kinsman failed after a large amount of rain came down in a short period of time, and in both counties, farmers have felt the effects of a very wet season.

It remains to be seen what kind of yields area farmers will get after harvests come in, she said.

Orahood said while it is true that farmers in northwest and southern Ohio are far worse off than in this part of the state, the season here was “definitely not good.”

Last year at this time, 100 percent of Ohio’s corn and soybean crops were planted.

“We have not been designated as a disaster area,” Orahood said. “With everything that happened here and especially in Kinsman, I was surprised that wasn’t changed.”

“It all starts at the local level,” Higgins said. “If the local Farm Services Agency sees enough evidence in their county that it is a disaster area, then they may make that request to the USDA.”

The local Farm Services Agency in Orwell deferred a request for comment to a Columbus spokesperson, who could not be reached for comment.

“Historic rains across Ohio this spring resulted in a record number of unplanted acres, late planting and significant uncertainty for farmers across large parts of the state,” Brown said in a press release. “I encourage eligible Ohio farmers to apply for these disaster funds, so they can get the relief they need.”

Portman said record amounts of rainfall in Ohio earlier this year resulted in significant amounts of unplanted acres and created tremendous uncertainty for farmers in our state.

“I’m glad that Secretary Perdue has now released USDA disaster funds for Ohio farmers and I will continue to work with him to ensure that our farmers and their families have the stability they need ahead of next year’s planting season,” Portman said.

Orahood said she still encourages farmers to reach out to their local Farm Services Agency to see other services for which they may be eligible.

“We encourage them to reach out because there may be some other programs they are eligible for,” Orahood said.