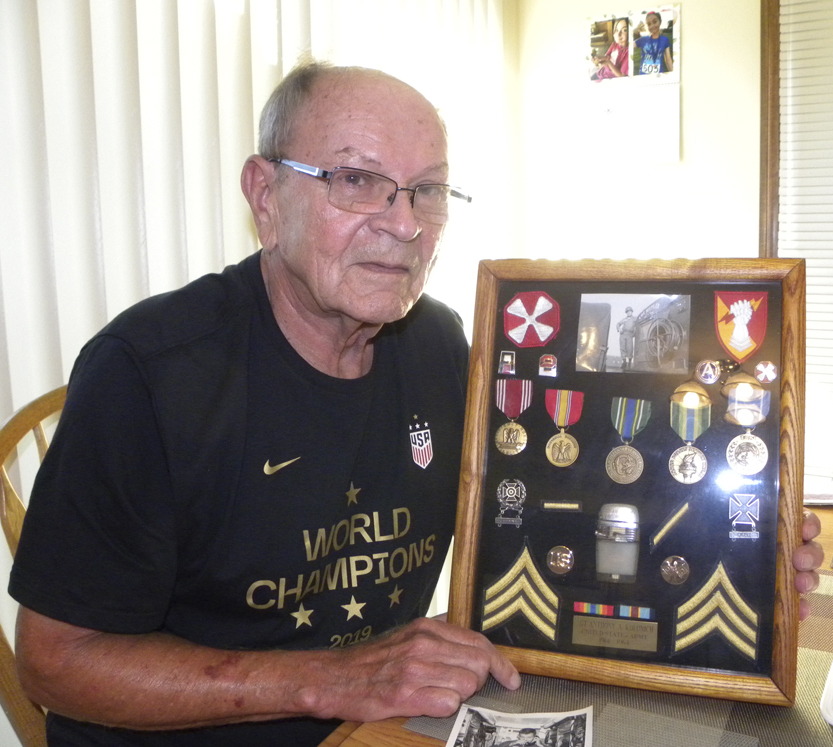 Staff photo / Emily Earnhart Anthony Kolonich, 77, of Howland, displays medals and other items from his U.S. Army service in 1961-64.

HOWLAND — Anthony Kolonich said when he graduated from high school in 1960, he got a job right away, but six to seven months later, he decided he wanted more.

“I wasn’t thinking about the draft,” Kolonich, now 77, said.

Because he enlisted, he was not sent to Vietnam, like one of his brothers. Instead, he joined the Army in 1961 and ended by serving as a communications officer in post-war South Korea.

Sent to basic training at Fort Knox, Ky., and signal school in Fort Gordon, Ga., he was supposed to go to Germany, but instead, joined about 40 guys in a specialized communications team at Fort Monmouth, N.J.

The same team in October 1962 would have been among the first units to get involved if events had escalated during the Cuban Missile Crisis, he said.

“If anything in the world happened, we had to deploy in 24 hours,” Kolonich said.

On the peninsula, they were communications experts, working 24-hour shifts on Hill K-14 about 30 miles from the demilitarized zone, or DMZ, dividing communist North Korea and democratized South Korea.

“If there was a field problem, they would have needed our communications network,” he said.

Kolonich’s team had to practice moving equipment, which was packed into the C124 and made stationary on a hill above the Yellow River and the Yellow Sea.

“We went to Korea because these radio system networks we had were flexible and versatile,” Kolonich said.

“We ran all the communications radar and intelligence equipment. When units moved, we heard it, though we knew we had to keep our mouths shut,” he said.

The complicated communications were important, Kolonich said, especially in the event of escalation of troops in places throughout the peninsula. All of the teams he led had to have top security clearances, he said.

“We were a combat outfit. I was a team chief. We ran long line carrier equipment radios, crypto equipment and faxes,” Kolonich said of his communications team support for the 173rd Airborne. “If we broke communications for a minute, there would be an investigation. You tried to be careful about everything.”

“In all of the equipment, we had duplicate equipment, so there was no fooling around,” he said.

It was good duty, Kolonich said, preparing the youngster he was — who needed that discipline and learning — to take care of himself.

“It led me to realizing I wasn’t the only one in the world that counted,” he said.

Kolonich said he stood on the hill that had been taken many times during Japanese and Korean conflicts in the few decades before. He said during daily duties, the men were never far from historic battles in the war, even when doing mundane tasks.

One day digging fence posts, the men had found a deep hole they had not noticed before. As they came near, they discovered the body of a dead North Korean first lieutenant, “his shoes, his body, almost all intact,” he said.

Other remnants of the war included the repurposed shells that locals had made into crafted ashtrays and other utility goods.

“The Korean people did not waste anything — our empty shell casings they turned into other useful things,” he said, including an ashtray he kept as a souvenir.

And there were friendships, like the mascot, “Charlie,” the dog who found a place with the men in his unit.

“If we had a field drill, we had a company of South Korean Marines protecting us,” Kolonich said. But Charlie, loyal to his newfound friends, served as a watch dog, defending against anyone he saw as an intruder.

“There was someone walking a mile away, he’d go nuts,” Kolonich said.

Kolonich said he did not know why he ended up being recruited to leadership positions while in the military.

“Here I was a 19-year-old kid, and they gave me charge of about a million dollars worth of radio communications equipment,” he said.

He came home to Warren and a 40-plus career as a supervisor at Packard Electric. He is most proud today of his family and has a passion for soccer, travel and learning.

“If I reflect back on that decision I made to join the Army, I would probably have done the same,” he said.