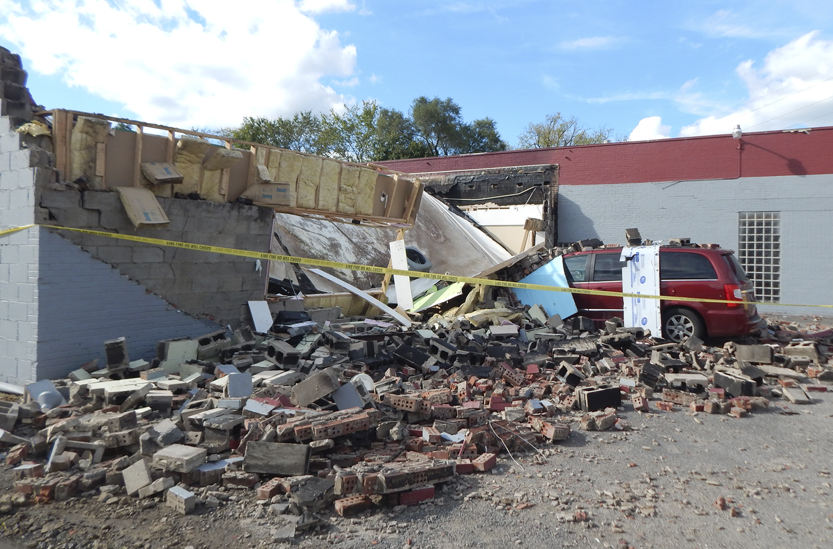 Clinkscale, staff and volunteers were working Saturday afternoon to remove items from the building and get them covered. There was water throughout the hallways and rooms.

“We have a flat roof and do what we can to keep the water off. There was so much rain last night, the roof caved in on the main front area and on the back side of the building,” she said, explaining a fire marshal also had been at the site to inspect the damage. It is believed the roof collapsed after 4 a.m. Saturday.

She said the water also caused some electrical problems.

“It looks like when the wires got wet, there was an explosion. I’m wondering if lightning may have hit something,” Clinkscale said.

She said she will meet with the insurance company to go over the damage and see what can be done. Some school items were taken and covered in the back area of the property.

Clinkscale said staff is able to get onto the roof to watch for water pooling, but there has been many heavy rainfalls this summer.

“We have had a lot of water on the roof all summer,” she said.

Clinkscale said she and her staff can work out of the Mahoning school site on Lakeview Avenue in Youngstown.

All American Cards and Comics is among a handful of Courthouse Square businesses that suffered water damage from the Friday night storm. The 3,000-square-foot basement of the building had water coming up the steps about a foot, but this isn’t the first time this has happened.

“It’s been higher in the past,” said Greg Bartholomew, owner of the shop. “I don’t have a drain down here, so I have to pump it out.”

Bartholomew lives in the apartment above the shop and said he noticed the water rising around 1 a.m. when he went to check on it.

“Of the five times this has happened, this is probably the least or next to the least amount of water we’ve gotten down here,” he said. “It’ll take about two to three days to pump this water out.”

Bartholomew said because this has happened in the past, he doesn’t keep anything of “perishable value” in the basement.

West & Main Bar & Grill, 187 W. Market St., also at Courthouse Square, had a post on its Facebook page Saturday saying it was closed for the weekend “due to unforseen circumstances” and hopes to reopen Monday.

Melissa Liste of Warren said her home on Greenmont Drive SE, off North Road, also was flooded. She said she was leaving for work as a renal care nurse around 4 a.m. Saturday when she saw her two-car garage floor caked with mud and standing water in the utility room and family room, which are accessed through the garage.

“The carpets in both rooms are soaked and I had to relight the pilot light on my hot water tank, so I know it was several inches of water,” Liste said. “I assume it was from the loud storm around 11:30 p.m. Friday and not the torrential rain I heard while getting ready for work because some of the water already was gone.”

She said part of the problem is her sloping driveway because when there is a heavy rain, the water runs toward her house and pools by the garage, seeping into the lower level of her split-level home.