About 200 gather on Courthouse Square 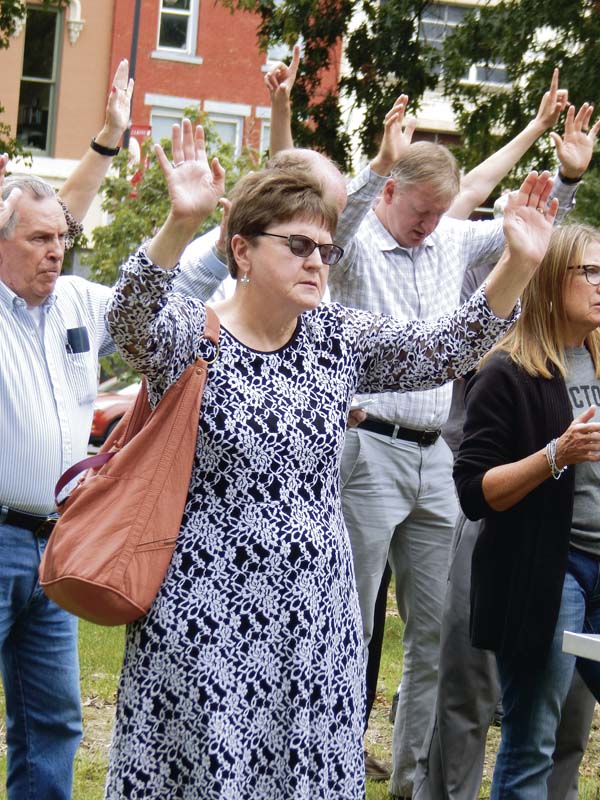 WARREN — Warren Township resident David Cook said he has seen too much violence with the mass shootings throughout the nation and wanted to have people come together in unity to stand up against it.

Cook, a Texas native who moved to Ohio, along with his wife, Patty, and more than 200 others gathered Sunday afternoon in Warren’s Courthouse Square for a community prayer service against violence.

“There have been too many shootings. The shootings that happened in Dayton were too close to home. I’m from Texas, so the shootings there also hit me hard in my home state,” Cook said.

Cook said he is concerned with the hatred and anger that exists in parts of the nation and world.

“It upsets me when I see and hear of all the shootings and people who have lost their lives,” he said.

Cook said he contacted Trumbull County Commissioner Dan Polivka to see about organizing some kind of gathering to promote unity and peace.

“We are thankful for the many good things going on in our community and nation. We are also concerned with violence. Even one shooting is too many,” Polivka said.

Kathy Pierce of Warren, whose son James Campbell was shot earlier this year on Atlantic Street, said the event meant a lot to her.

“It means a lot to have everyone unified like this. Faith in God can help restore communities,” she said.

Mayor Doug Franklin said residents of the community have joined forces to work for peace, justice and equality for all.

“There is power in love and nothing less. Power without love is reckless and abusive. Power at its best is love implementing the demands of justice,” Franklin said.

He told those who attended to go out into the community and take the information to family, neighbors, friends and even their enemies.

“Take the message today and live the message. Talk to those who do not understand love. That is our mission as a community — to do God’s work every single day of our lives,” Franklin said.

Pastor Joseph Walker of Restoration Christian Fellowship said he was encouraged to see so many people at the event.

“Even when there are circumstances of violence beyond our control, our God is with us. God will turn things around. I see an army right here that has the ability to turn our city around,” he said.

Prayers were said for the city, an end to violence, and to pray for God to be the center of homes, government and the nation. A goal is for the people of the city to help slow down violence in Warren.

Pastor Mikel Lagaros of Victory Christian Center in Warren said, “Warren is the epicenter of what God wants communities to be.”

“It is important that we become unified and come together in the bond of unity. We want to see God do some miracles in Warren,” he said.

Larry Stephens of Higher Praise Church in Warren said despite what has happened with violence. it is important to keep fighting “the good fight of faith.”

“We are in a spiritual warfare of things that want to tear us apart. We together will stop it. The fighting spirit is here,” he said.

Dominic Mararri, director of public relations for the Warren Family Mission, said it is important to pray for officials at all levels.

“We want our leaders to be people of integrity and watching out for the citizens. When you include God in your life, he will give you a plan to give you hope and a future. We need to get back to the beliefs that founded this country,” he said.

WARREN — A nonpartisan Ohio think tank is coming out in support of an Ohio Senate bill that would reclassify ...

WARREN — A Commerce Avenue resident reported that a man who periodically stayed at her apartment stole Social ...