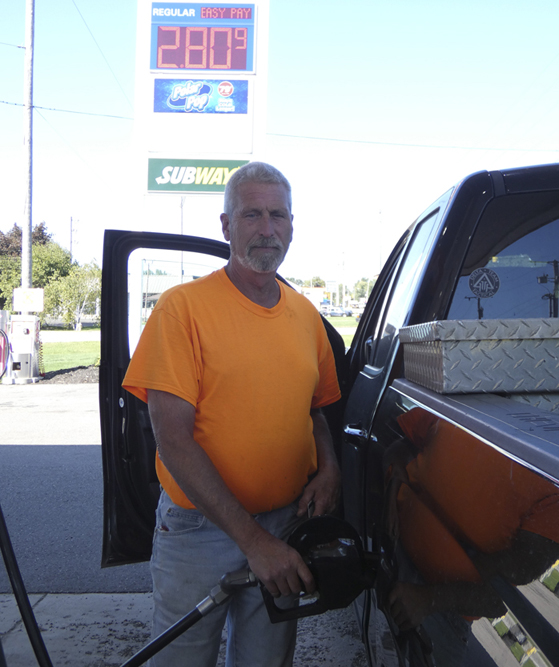 Staff photo / Beth Shiller Richard Huber of Cortland fills his tank at the Circle K at the intersection of state Route 46 and state Route 5 in Cortland Wednesday. Area gas prices jumped more than a nickel since Monday.

The weekend attack on Saudi oil facilities that caused crude oil prices to spike earlier this week has made its way down to consumers at the pump.

The average price for regular gasoline in the Warren-Youngstown area leapt 9 cents Wednesday to settle at $2.73 per gallon, but still that’s less than the average across Ohio of $2.77 per gallon, according to price reports from AAA East Central.

And in the past week, which preceded the attack on Saudi Aramco’s processing facility in Abqaiq, local prices rose 26 cents from an average $2.47 per gallon and 17 cents in Ohio from $2.60 per gallon.

When motorists feel the pain is controlled by when retailers purchase the fuel — large retailers who receive a shipment or more a day can pass the increase onto consumers more quickly, whereas smaller mom-and-pop stores that receive gasoline less don’t.

“The more expensive gasoline being sold at the beginning of the week is now being sold at the pump,” said Jim Garrity, public and legislative affairs manager for AAA East Central. “That could be an explanation for the higher prices.”

Tempering the price increase is news from Saudia Arabia’s energy minister that the processing plant has recouped 2 million of the lost barrels and expects to be operating a full capacity by the end of the month, Garrity said.

“We may have seen the brunt of the increase,” Garrity said. “The next few days will be a good indication if we are going back toward a decreasing trend we typically see this time of year.”

The trend is due to demand tapering off as the summer travel season winds down and the production of winter blend gasoline, which is a less expensive gasoline, Garrity said.

After the announcement, the price of oil fell Wednesday.

The attack on the processing facility pushed crude prices up more than 14 percent Monday, a spike equivalent to the Iraq invasion of Kuwait before the 1991 Gulf War.

The attack led to a 5 percent drop in global output, but Saudi Arabia said it would be restored by the end of the month.

The International Energy Agency said it’s not yet considered releasing emergency stocks of crude to offset the drop in output caused by the weekend attacks on Saudi oil installations, because oil markets remain well supplied.

Yemeni rebels claimed responsibility, but U.S. officials said they suspect Iran, Saudi Arabia’s regional rival. On Wednesday, the Saudis put on display what it said were Iranian cruise missiles and drones used in the attack.

An escalation in tensions between the U.S. and Iran could push the oil price up again. The cost for a barrel of U.S. crude is up 30 percent this year and it has yet to return to price levels before the attack Monday, which exposed the vulnerability of Saudi Arabia’s key oil assets.