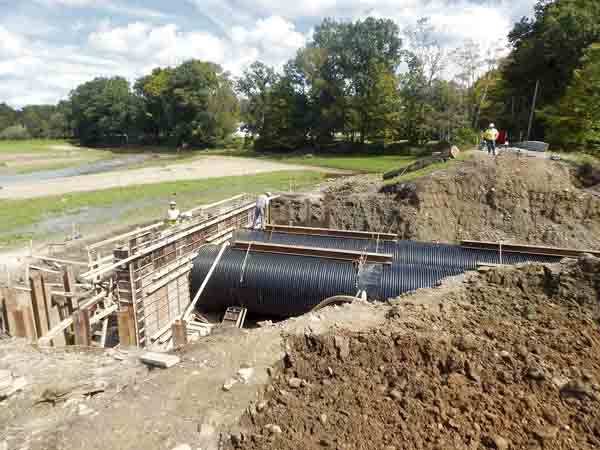 Kinsman dam project with work crews from Jet Excavating work on culverts to divert the water.

KINSMAN — Since late August, crews with Jet Excavating of New Middletown have been working seven days a week, including holidays, on reconstructing the Lakeview Drive road and bridge that leads to the Lakelands area of more than 30 homes.

Township Trustee Greg Leonhard, who lives on Lakeview Drive, said he knows the construction crews have been busy as he has seen and heard them daily.

“I live nearby and I have seen them every day,” he said.

Crews are putting in culverts to reroute water while also working on a new road.

Todd Phillips, president of Jet Excavating, said unless there is bad weather, such as thunderstorms and heavy rain, the workers have been busy since Aug. 26 on the expected 60-day project.

“Unless there is a lot of rain, we are shooting to be done by the end of October,” Phillips said, noting cleanup work will take place after the project is complete.

Cement trucks were pouring concrete for the headwall of the dam at the site and work is being done on five sections of culverts in the area. The culverts, which should be completed in two weeks, are not in the area where the dam breached, but in another area to help divert water and prevent flooding.

Copper pipes are being installed that allow the water to drain from the upstream side, downstream. A temporary road has been put in place for workers.

On July 20, the dam by the Lakelands overflowed because of heavy rains and knocked out a section of Lakeland Drive. A home at 6684 Lakeview Drive near the section of the road that collapsed had to be torn down because it was caving in. The resident that lived there is living somewhere else.

Township officials recently received word they will receive additional financial assistance for the $1.8 million project. Trumbull County Engineer Randy Smith said the township will receive $253,647 from the Ohio Public Works Commission to cover the local match for the Lakeview Drive project. The project already had secured $1 million from the Ohio Department of Transportation.

The project will restore access to the Lakelands development on the other side of the dam where there are 30 homes. The road will allow residents to get back in their homes and give emergency vehicles full access.

Trustees have said the Lakelands homes affected by the flooding received a few inches of water and are inhabitable once the debris is cleared out. Officials said previously the area where the road and dam broke will be filled in with dirt and a new course for water will be directed through the culverts.

Several fundraising events have been and held or are scheduled to generate money to help residents. Donation are being placed in the Kinsman Relief Fund.