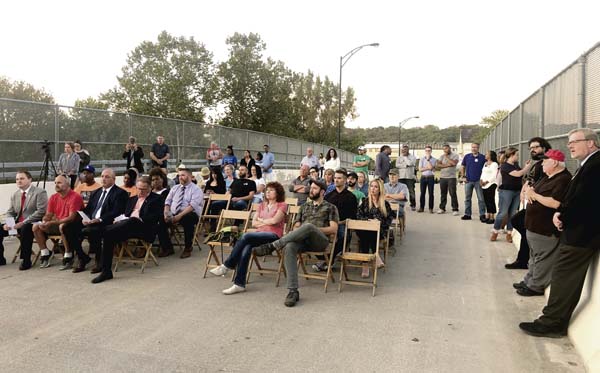 Correspondent photo / Anthony Suszczynski People gathered Wednesday night at Walton Street, on the 42nd anniversary of Black Monday, because it’s where Campbell, Struthers and Youngstown meet. They remembered the people who worked in the steel mills, but also are looking forward to reclaiming Youngstown’s identity.

YOUNGSTOWN — As dusk approached, a crowd gathered Thursday on the Walton Street bridge.

People mingled around a stage that had been set up near three large spotlights. On stage was Derrick McDowell, founder of Youngstown Flea, an outdoor market that opens monthly in downtown Youngstown to help residents sell their products.

McDowell has a passion for the area, and it led him to Walton Street because it’s where Campbell, Struthers and Youngstown meet. On the 42nd anniversary of Black Monday, McDowell believes it’s important to remember the people who worked in the steel mills, but also to look forward and reclaim the Youngstown identity.

“What this is, is to have a conversation and to commemorate,” said McDowell as he explained to the crowd the purpose of the night.

“Last year, on Sept. 19, 2018, we stood on the steps of city hall in downtown Youngstown and through a council resolution and a mayoral proclamation and a congressional resolution, as well from the office of (U.S. Rep.) Tim Ryan, we literally took back Sept. 19, 1977, the day known as ‘Black Monday,’ and we changed that name to ‘Reclaiming Our Identity Day,'” McDowell said.

“We’ve reached a space in 2019 where we’ve got to begin to deal with the community as it is now and the community that we want to see … we don’t have the time or the luxury to cry over our spilled milk anymore. The purpose of today is not just to commemorate the legacy of the steel mills.

“It’s not just to honor those brave mill workers who gave all. My grandfather gave 40 years of his life to Republic Steel and I cannot allow that legacy to simply die with his generation … but in order to do a great work we’ve got to understand what began that work,” McDowell said.

He then invited Bill Lawson, executive director of the Mahoning Valley Historical Society, to discuss the impact the steel mills had on Youngstown. Some other guests were Struthers Mayor Terry Stocker, Campbell Mayor Nicholas Phillips, and Joe Meranto, superintendent of Youngstown schools.

The event ended with community residents gathered around the three large spotlights as they turned on and illuminated the sky.

The three beams of light, each representing one city, shone together to create a “beam of unity.”

Sharon Moser, a Youngstown resident, was in attendance and said, “supporting friends, bringing the city together to unify us all is a pretty cool event.”