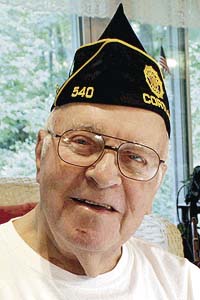 BAZETTA — Roger F. Yost was a recent graduate of Newton Falls High School in 1951 when he was drafted into the Army during the Korean War.

He thought because he had one bad eye, he wouldn’t be drafted right away, so he got married to his girlfriend, Eleanor. But just after they returned from their honeymoon, he received his draft letter.

It wasn’t easy packing up his things and leaving his new wife, but that is what he did, receiving basic training in Missouri before being sent to California and being shipped out to Korea in 1952.

The trip, his first on a ship, was “terrible” and took 13 days, he said. And when he got there, he realized that human waste was used as fertilizer, and the smell bothered him for two weeks. After that, he didn’t notice it anymore, he said.

Yost, who was attached to the Air Force, was part of a heavy equipment company that built aircraft landing strips — the first one in the southern part of the country. The second one was farther north, just 10 miles south of the border between the north and south.

One of his proudest achievements during his 13 months in Korea was a commendation for what the military called the “the outstanding manner” in which he carried out his duties as night operations sergeant, a position that put him in charge of construction at night, Yost said.

His only experience in construction before his military service was working with his father in the plumbing business.

The construction experience he gained in Korea aided him when he returned home and went to work for Packard Electric.

He took classes at Hiram College and became an industrial engineer at Packard. He also was superviser of the Packard Electric Estimative Reliabilty engineer group, supervising 13 employees. He retired after 28 years with the company.

Yost said he wasn’t initially happy to be leaving his new bride and going to war, “But I’m glad I served. I’m really proud to be a veteran,” he said.