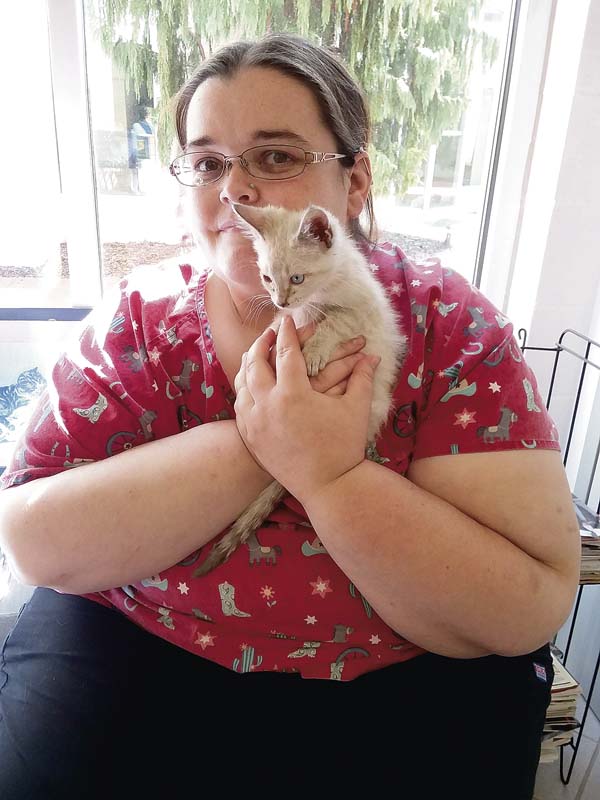 CANFIELD — Sherry Bankey, Angels for Animals’ cat-wing manager, and longtime “Price Is Right” host Bob Barker would have been friends at first sight because of their shared mantra: “Get your pets spayed and neutered.”

Bankey said a record number of cats was surrendered to the shelter in July and August. In July, 520 were dropped off and in August, 614.

Bankey added: “We are simply out of room.”

Katherine Edwards of Poland has been fostering cats for Angels since 2015. “My husband, John, and I have fostered more than 100 cats and kittens. It’s therapeutic for John and me,” she said Tuesday.

Her husband is a veteran who was deployed to Kuwait once and to Afghanistan twice. He is now retired.

“Taking care of these cats is rewarding,” said Katherine Edwards, noting that they keep their animals inside, which includes her cats and the ones she fosters.

Recently, there have been five cats adopted, two from the shelter and three from PetSmart in Niles. “PetSmart helps us with adoptions,” she said.

Bankey herself decided to adopt a kitten from the shelter. “I haven’t named my kitten yet, but she’s uncommon in that she’s orange. It’s more common to see orange male cats,” she explained.

Her new kitten is about 5 weeks old.

Angels does put down animals, but she added: “I ask myself how many cats are already out there dying? Cats get flea anemia, feline leukemia and panleukenpenia. These are fatal diseases. If they test positive for the last two, they are put to sleep. It’s a travesty.”