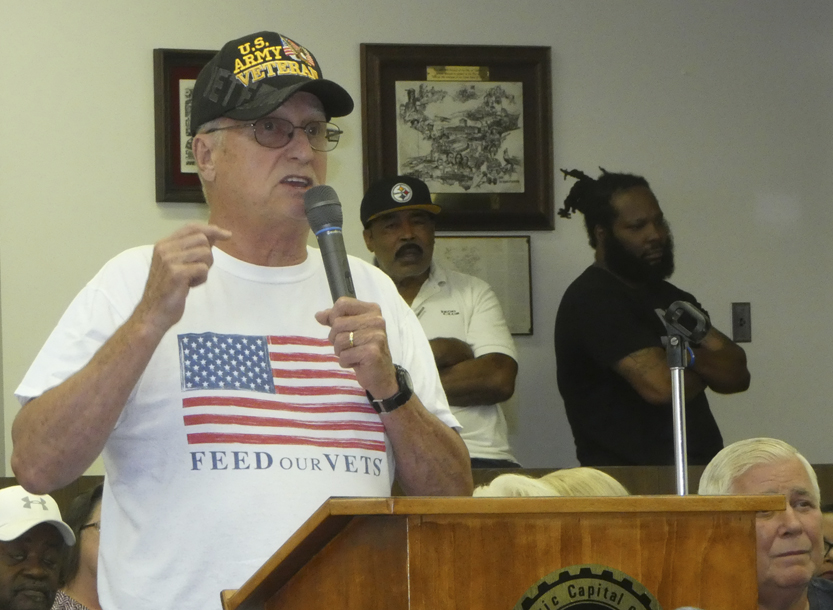 Raymond L. Smith / Tribune Chronicle Bob Weitzel, president of the Northwest Neighborhood Association, told Warren zoning officials that a detox facility not only would potentially affect its immediate neighbors, but the entire city.

WARREN — Residents of homes surrounding the former Imperial Skilled Nursing Home, 4121 Tod Ave., forcefully told city zoning officials that placing a residential substance abuse center in their area would jeopardize the stability of one of the city’s oldest neighborhoods.

The Warren zoning commission agreed and voted Thursday afternoon against a requested zoning variance that would have allowed the center. A spokeswoman for the proposed detox center said it would have provided 70 to 100 jobs and about $200,000 worth of payroll income per year.

Nearly a dozen people pleaded with members of the zoning commission before the vote, stating that placing a residential substance-abuse facility in the neighborhood would create a sense of fear among residents, potentially lower their property values and force some to consider moving from the city. The audience portion of the Warren City Council chamber was filled to capacity, mostly with those against the requested zoning change.

Speaking for the proposed center was Esther Pla, a behavioral health care consultant working with Balstar Healthcare Service Inc., a Wichita, Kan.-based company trying to open its first facility in Ohio. Balstar Services Inc. opened a similar residential facility in 2017 in Wichita, she said. Warren would have been the second.

“It is a young company,” Pla said. “It would be looking to treat people who have insurance or those who can pay for their own (care).”

Pla, a retired nurse who said she has worked in the industry for more than four decades, said that while she understands the fear expressed by some residents, she believes there is no reason for the concern.

But Victor Brown, an area resident, said having these types of facilities in a residential neighborhood likely will bring an increased level of crime and instill fear in an area of mostly retired people who paid their dues.

“It was said that these facilities bring no more crime than the corner store,” Brown said. “We don’t want that crime.”

Brown said people should not feel they are prisoners in their own homes.

“It is the choice of people who go into one of these places,” Brown said. “It is not the choice of the people living around it whether they want them in their neighborhood.”

Another resident, Brad Ferguson, described the west-side neighborhood as close-knit, with most people knowing those living in and traveling through the area.

“How do we know that those people traveling to and from the facility are not casing homes?” Ferguson said.

Ferguson said he knows that detox and treatment facilities are needed.

“I have family members who were on drugs,” he said. “I know what goes through their minds when they need drugs. I know what people are capable of.”

Darlene Tackett agreed there is a need for residential treatment facilities, but not in one of the city’s nicer residential neighborhoods.

The Rev. Dr. Avan Odom, pastor at Friendship Baptist Church, asked the zoning board members to consider the concerns of the residents that crowded the council chambers.

“They are going to have to live with your decision,” Odom said. “Do not disregard their concerns.”

Bob Weitzel, chairman of the Northwest Neighborhood Association, said promises made prior variance changes may mean nothing after the changes are approved.

“Changes may be made afterwards,” Weitzel said. “A company may sell the property to another company, and they will not keep the promises made by the original people who sought the variance.”

William Parks Jr., also known as “The Mayor,” said when the nursing home was operating, there was a day when he heard knocking on his doors. When he went to the front door, no one was there, but when he went to the back there was an older woman in the yard with no clothes on.

“If someone like her could get out, what do you think someone wanting to get out because of their addictions would be able to do?” Parks said. “We’ve worked too hard for what we have.”

Parks agreed the area needs jobs, but argues it does not need them so badly that it places its oldest, most stable residents at risk.

“People do not move,” she said.

Patrick K. Wilson, an attorney representing the property’s owner, noted in a letter that a denial creates a hardship because the property is unmarketable under current zoning regulations.

“Currently, the property has buildings that sit vacant with no buyers other than those interested in utilizing it as a drug treatment facility,” he wrote.