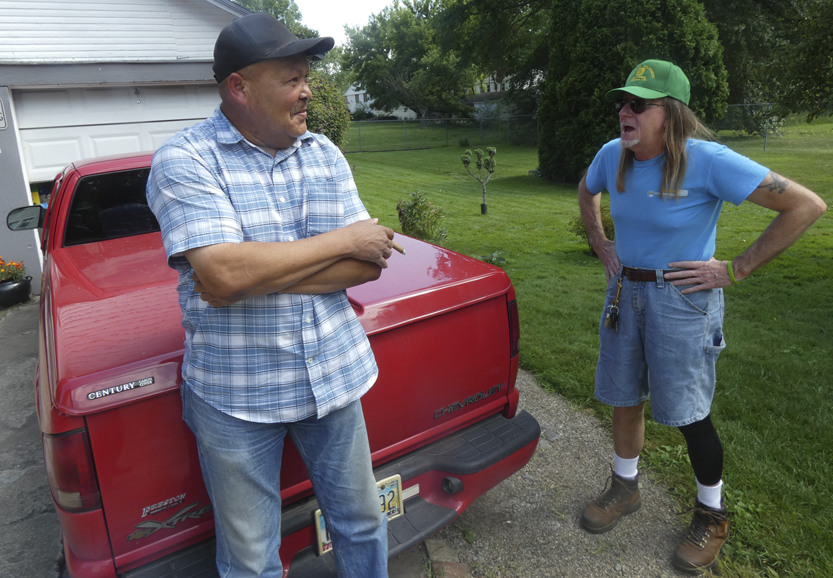 Tribune Chronicle / Raymond L. Smith Comstock NW resident Willie Cargill talks to Councilman Alford Novak, D-2nd Ward, about how water floods the yards in his neighborhood after moderate rain. The flooding has ruined yards and creates hazards for residents because it can take weeks to drain away from the area.

WARREN — Willie and Maybelle Cargill, who have lived on Comstock St. for more than 30 years, worry about maintaining their property because anytime it rains heavily, their yard becomes like a small pond.

“When we had the big rain on Father’s Day, water sat in our yard for about a week,” Willie Cargill said. “We’ve had problems of water flowing into our yard and sitting after heavy rains over the last two to three years.”

Cargill said water flows toward their property from every direction, often settling in the Comstock neighborhood.

This year’s constant rains has made the problem worse.

“We had bushes and plants in our yard that we’ve had to replace,” Cargill said.

Rose Bell, a 47-year Comstock resident, recently placed a new concrete driveway on her property. She described waters flowing past her house so fast and long earlier this year that she was afraid of leaving her home.

Bell’s house sits above street level, so even during the heaviest storms, the water settles a few feet below her home’s walls.

Councilman Alford Novak, D-2nd Ward, said the water level has been higher than normal, in part, due to changes in grade during construction of the Red Run project and the bike trail.

“We used to get some water flowing down here, but it seems to be so much more,” Novak said.

The councilman said property owners pay a storm water utility fee every month, so the city should be responsible for taking care of the problems stemming from standing water in yards.

Eve Gillespie, who has lived in her Roosevelt Street NW home for more than 20 years, described seeing ducks doing dives in water that settled between her home and the neighbor’s.

Gillespie has had to hire a gardener with a special tractor with a grass-cutting attachment that can moved over her backyard lawn.

“If we put a lawn mower on it, it could sink in the mud,” Gillespie said.

Several owners of about a dozen homes on Kinsman and Roosevelt streets also shared their concerns about standing water.

Ed Haller, director of the city’s water pollution control division, has had crews in the Roosevelt and Kinsman neighborhoods since the July 29 City Council Utilities Committee meeting when residents begged for help.

“We’ve looked at the street level in comparison to their yards,” Haller said. “We also sent cameras into lines to determine if there are blockages.”

Haller said his crews have been working with residents trying to find solutions. However, Haller emphasized city crews cannot do work on private properties.

“There sometimes are exceptions when there are easements or right-of-ways are established, but, otherwise, we cannot do anything on privately owned properties,” Haller said. “We have a limited amount of money to work with.”

Haller said the solution to these problems likely will not be simple.

“If not, but we discover what is causing the problems, we can consult with them and make recommendations of what may be done to solve their collective problem,” he said. “These residents may be willing to work together to finance a project on private property if they believe it solves the problem.”