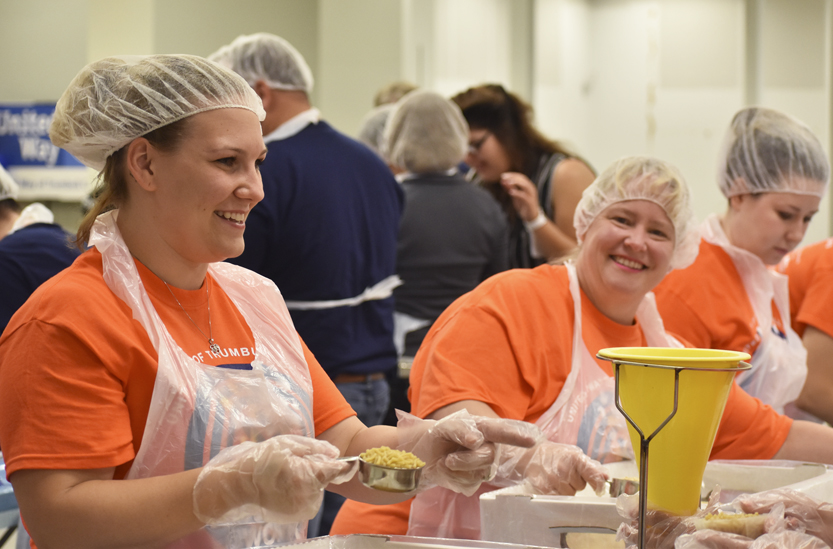 WARREN — More than 100 volunteers from 25 businesses and other organizations packaged food for 20,000 meals for people in need Friday morning.

The event was a first for United Way of Trumbull County and kicked off the 2019 campaign, said Ginny Pasha, president / CEO of the local chapter.

The food will be distributed to five providers in Trumbull County — the Salvation Army, Cortland Cares, Community Volunteer Council, Niles Community Services and NESFACE, a food bank in Kinsman.

The food was purchased with money donated from sponsors and an anonymous funder, Pasha said.

In addition to packaging food for 20,000, the volunteers also collected school supplies to be delivered to Warren, Howland, Niles, Lordstown, Lakeview and Brookfield school districts.

Other volunteers — sending the total number involved to around 200 — carried on United Way’s tradition of helping people in need complete house and yard work, Pasha said.

“We are so excited to be doing this. Barb Klingensmith with Country Neighbors did it and I heard about it, and we worked together to make this come together today. She is over there helping,” Pasha said, pointing.

Pasha said she wants to continue the event and create 50,000 meals next year.

If the old Sears store in the Eastwood Mall — where it was held Friday — is occupied this time next year with a new retailer, the Cafaro Company said it will provide an even bigger space, Pasha said.

The volunteers were placed in stations by group to sort and package food products in the old store.

Volunteers were enthusiastic and smiling, though no one seemed excited about wearing hair nets.

Sue Datish, with the Trumbull Retired Teachers Association, said it is a pleasure to help others, especially with a group of like-minded people.

Anyone who donates $260 or more to the campaign to help those in need will be entered to win a 2019 Chevy Equinox donated by Greenwood Chevrolet, Pasha said. Donations can be submitted through www.unitedwaytrumbull.org.