Italian American Festival expected to go on as planned 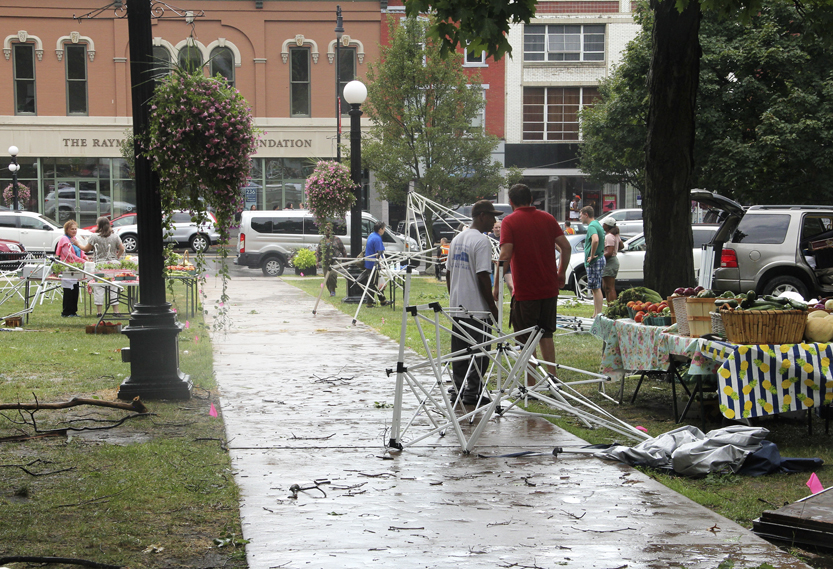 Tribune Chronicle / Allie Vugrincic Vendors were setting up for the weekly Farmers Market on Courthouse Square in Warren on Tuesday afternoon when a fast-moving storm blew through the area, toppling tables and knocking over a large tree that damaged tents being set up for this weekend’s Italian American Festival. One person was injured during the storm.

WARREN — Within a half hour of a burst of severe weather tearing through downtown Warren around 3 p.m. Tuesday, people were out on Courthouse Square cleaning up the damage.

Several tents set up for the Italian American Festival, including the large beer tent, were damaged in the storm. One tree came down completely while another was cracked in half, falling after the initial burst.

Warren firefighters quickly arrived at the scene and surveyed the damage.

Several Italian American Festival grounds committee members were at Courthouse Square on Tuesday evening, cleaning up some of the branches and debris from the storm damage.

Geoff Fusco, a committee member, said Tri Son Tents and Party Rentals will be here today to help set the tents back up. Many will need to be replaced.

“They are doing everything they can to get replacement parts and whatever they can to get the main tents back up. We are getting the water off the tents. We plan to make sure the Italian American Festival kicks off like it normally does,” Fusco said.

George Rutherford, a committee member, said the city’s operations department also will help today. He said the four-day event should kick off by 4 p.m. Thursday.

Christina Campbell, a program associate with Trumbull Neighborhood Partnership, was preparing for the weekly Farmers Market on the Square when the weather hit the area. She said everything was going well until the rain suddenly started.

“All you could see was rain blowing everywhere,” Campbell said.

She said vendors and members of TNP grabbed onto their tents in an attempt to keep them from blowing away. She said she didn’t see the trees fall or know they were down until the storm passed.

According to Campbell, one person was hurt when a large tree branch fell on him / her. Trumbull County 911 Director Ernie Cook also said one person was injured and taken to the hospital by private car.

Landon Kline, Jake Carrino and James Arden, also with TNP, said they were inside when the storm hit, but could hear it. When the weather calmed, the three quickly joined a cleanup effort on the square, piling downed branches and collecting debris.

They said they wanted to make the city’s job easier.

Elizabeth Oliver, who bought her Vine Street NE home through TNP, said she was inside cleaning the house while her children played on the porch when suddenly rain started to pour and a large streak of lightning flashed across the sky.

Then “there was a big huge ‘crack’ that shook the whole house,” Oliver said.

It was the sound of a large, old tree in her front yard snapping and falling. The massive trunk just missed Oliver’s house — one of several TNP renovated from the county’s land bank in Warren’s garden district. Its roots lifted up sections of the slate sidewalk. The tree’s branches landed among some of the plants at the Giving Tree Garden, but missed the garden’s swing.

Power was out at several intersections and crews from Ohio Edison dotted the streets, fixing downed wires.

As of 12:30 a.m. today, 145 people still were without power in Trumbull County, with 87 customers were still out in Greene, 35 in Brookfield and 11 out in Gustavus, according to First Energy’s outage website. All customers had been restored in Warren.

Fire trucks, ambulances and police cars were out. Trees were down in yards, in the street and on some houses. Storefronts were blown out at several places, including Trumbull Art Gallery on North Park Avenue on Courthouse Square and the Past Times Store on East Market Street.

At Sunrise Inn, a wall in the parking lot was blown out.

“It has to be a microburst; there is also damage down at the Amp (Warren Community Amphitheatre). Trees are down and so are tents,” said Ken Haidaris, owner of Sunrise Inn and Sunrise Entertainment, which puts on weekend shows at the amphitheater.

Greg Bartholomew, owner of All American Cards and Comics, said there was a “white out” from the rain.

“There was deep water and branches all over the place. There was half a tree in front of Saratoga (on East Market Street),” Bartholomew said.

Warren Safety Service Director Enzo Cantalamessa said the damage was severe throughout the city — and in particular downtown.

“Our first responders, in conjunction with operations, water and water pollution control departments, performed extremely well. We are thankful the damage did not result in serious bodily harm,” Cantalamessa said.

WKBN 27 meteorologist Paul Wetzl said 2.2 inches of rain fell in the Warren area during that storm and one several hours later.