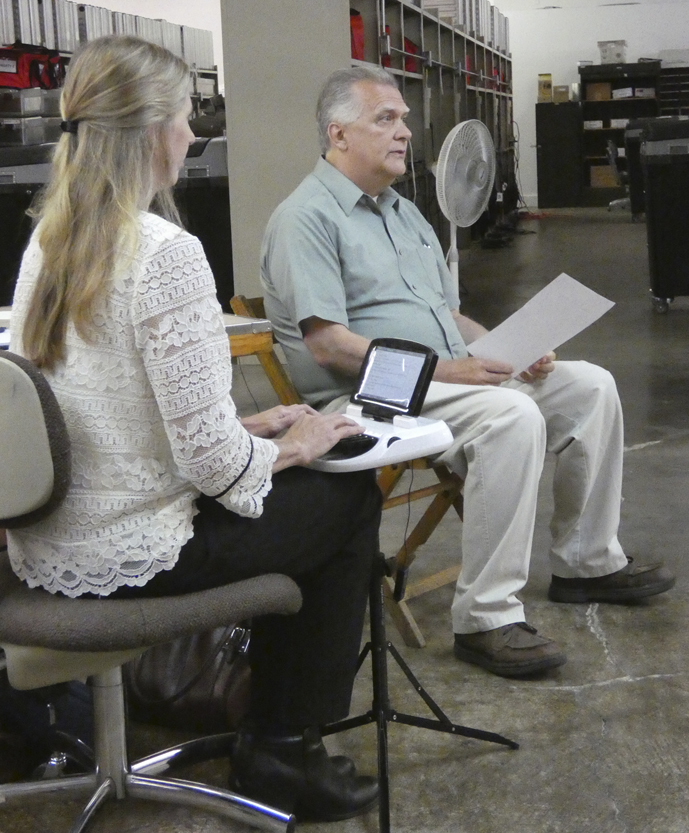 Tribune Chronicle / Ron Selak Jr. Randy Law of Warren, right, testifies Monday at the Trumbull County Board of Elections during a hearing over his party affiliation. The board upheld a challenge to Law’s candidacy as an independent for Warren mayor by a 3-1 vote.

WARREN — It’s been said in politics there are two ways to run for elected office — scared or unopposed.

Well, Warren Mayor Doug Franklin has nothing to fear — at least for the moment — now that the Trumbull County Board of Elections determined Franklin’s challenger, independent candidate Randy Law, didn’t disaffiliate himself in good faith from the Republican Party and as such, cannot run on the Nov. 5 ballot.

After Monday’s hearing on a challenge to his candidacy, Law said he plans to immediately appeal the board’s 3-1 decision to the Ohio Supreme Court and feels confident it will be reversed.

“It’s very unfortunate the board made the decision it did,” said Law, ex-chairman of the Trumbull County Republican Party. “I’m very confident we’re going to appeal as case law is in our favor. I look forward to being on the ballot in November and cleaning up Warren. Crimes and drugs and businesses leaving it, that’s why I’m running and I’m confident we are going to prevail.”

The board’s decision Monday was preceded by a lengthy hearing requested by Warren attorney and resident Daniel B. Letson to challenge Law’s party affiliation.

Letson argued Law, of Warren, was a registered Republican in the 2018 primary election — there was no Republican ballot in May in Warren — and he ran as a Republican on the ballot and circulated petitions for a Republican candidate in Trumbull County Family Court.

In addition, Letson said Law remained on the elections board rolls as a precinct committeeman for the party and didn’t change his party affiliation on his designation of treasurer paperwork, which is needed so candidates can raise and spend money, until seven days after the independent filing deadline.

Also, Letson questioned Law’s social media presence that still had him on a Facebook page as a Republican and noted a quote from May in the Tribune Chronicle that, to paraphrase, states Law didn’t make up his mind until after the primary election filing deadline.

Law refuted Letson’s claims by providing a time-stamped copy of a letter from April 18 to the elections board stating he was stepping down from his precinct post. The letter also was sent to the Trumbull County Republican Party, which later acted on his resignation.

Of his Facebook pages, his personal page has no mention of party affiliation, his active mayoral page lists him as an independent candidate and his state representative election page, Law said, he tried to pull it down or change the name, but could not. He said was able to change his party affiliation to independent in a section of the page.

In addition, he noted he didn’t vote in the May primary election. In Ohio, party affiliation is determined by ballot preference in the primary; there is no other way to change it.

“Short of getting a tattoo that says ‘I’m an independent,’ is there anything else you could have done?” Law’s attorney Ryan Stubenrauch said.

As for changing to independent on his designation of treasurer paperwork, Law said it was just a matter of timing and he made the change within the time allowed.

Republican board member Ron Knight cast the lone vote against removing Law from the ballot.