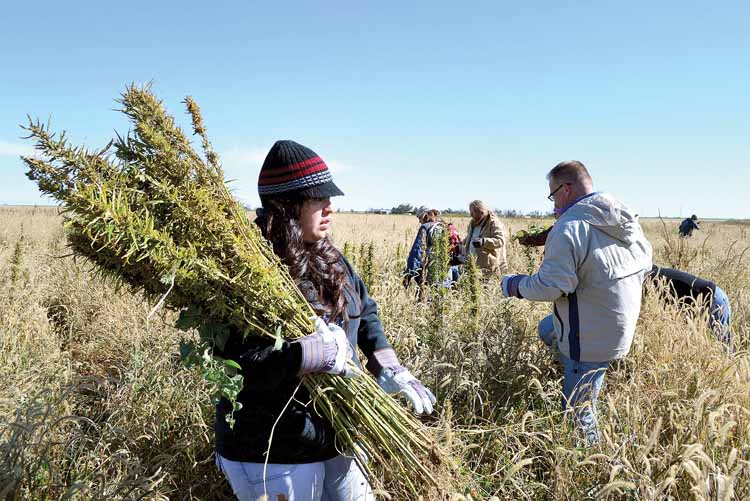 AP In this Oct. 5, 2013 photo, volunteers harvest hemp at a farm in Springfield, Colo., during the first known harvest of industrial hemp in the U.S. since the 1950s. Here in Ohio, hemp was recently decriminalized and it’s expected farmers will plant the first crop in the 2020 growing season.

When state lawmakers legalized hemp last month, they did it to open a door for Ohio farmers who haven’t turned a profit in three years to earn a buck with a new cash crop.

It was never viewed as a saving grace for the agricultural industry, but instead, legislators wanted to level the playing field with farmers in states like Kentucky already growing hemp since Congress legalized it in a 2018 farm bill.

But the fallout from Senate Bill 57 has a put a new burden on law enforcement to prove confiscated cannabis is hemp’s illegal cousin, marijuana.

It also led the state’s top attorney last week to publicly reaffirm that consuming recreational marijuana is still against the law while at the same time putting into place a procedure for police and prosecutors to differentiate between the two on most felony-level criminal cases.

Getting to this point

U.S. lawmakers in 2018 approved a farm bill that legalized hemp cultivation by removing it from the list of federally controlled substances. The law treats hemp like any other agricultural crop.

Ohio lawmakers wanted an even playing field for Ohio farmers, which led to Senate Bill 57, which decriminalized hemp in pretty much the same fashion as federal lawmakers did.

Specifically, the law changed the definition of marijuana in the Ohio Revised Code to exclude hemp, defined as cannabis containing not more than 0.3 percent THC, the psychoactive ingredient that gets people high.

It was introduced in February, passed by the Ohio House and Senate in mid-July and signed by Gov. Mike DeWine at the end of July.

“Those states growing hemp had an advantage of putting it into a farm bill type of program,” said Ty Higgins, director of media relations for the Ohio Farm Bureau. “Ohio said, well now that Kentucky is doing it, Pennsylvania is doing it, we as a state need to be on a level playing field.

“We’re not saying hemp is going to be a saving grace … but we are saying this could be an opportunity for Ohio farmers to grow it on their farms to bring in another source of revenue,” Higgins said.

Prosecutors and police departments across the state are trying to clear the “muddy waters” they were presented when a decades-long method for testing marijuana went up in smoke with the new law.

For years, a field test could identify if a sample contained THC. But to determine if the level of THC is greater than 0.3 percent, it requires new equipment, new tests and, Warren City Law Director Gregory V. Hicks said, new certifications.

The new tests must be certified to hold up in court, be cost effective and timely for law enforcement to pursue cases against people found in possession of, or trafficking, suspected marijuana.

The complications ripple through the criminal justice system because of restrictions on how quickly most marijuana cases must be prosecuted after the substance is found, forcing police and prosecutors to strategize.

“It is muddy waters,” said Sgt. Larry McLaughlin of the Mahoning County Sheriff’s Office, commander of the county’s drug task force. “While we are charged with enforcing the law, we have to be frugal with taxpayer dollars as well.”

Few, if any, labs in the state can run the tests needed to show the level of THC present in a cannabis sample, meaning there likely will be long wait times and expensive bills to prosecute, in most cases, a minor misdemeanor. Even state labs aren’t expected to have the capability until the end of this year or early next year, according to Ohio Attorney General Dave Yost.

Plus, Hicks said, once the labs can perform the tests, they may be inundated with a backlog of cases and they may be addressed in order of seriousness.

Prosecutors have six months to charge a person with a minor misdemeanor possession charge and two years to charge on a regular misdemeanor, Hicks and Gains said. The statute of limitations is six years for a felony, Gains said. All marijuana trafficking charges are felonies.

Trumbull County Prosecutor Dennis Watkins said he and other prosecutors are unhappy with the pace in which lawmakers pushed the law through.

Watkins said the uncertainty was sprung on local agencies without much consideration of how it would affect day-to-day operations in the lawmakers’ hometowns.

Hicks said the issue is more of a “conundrum” or a “momentary hiccup” but is in no way a “free pass” for people to get away with illegal marijuana use.

“We would have seen problems in other states, heard from law enforcement, heard from the attorney general. We heard nothing,” Sean O’Brien said.

Said Michael J. O’Brien, “I just feel that marijuana is still illegal and hemp is going to be grown in Ohio and it’s going to be cultivated and processed in Ohio in a legal way, and there is still going to be a difference between the two.”

Before the circumstances for THC-level testing normalize across the state, there will likely be as many approaches to coping with the new law as there are strains of marijuana.

Gains said he is advising police departments that have questions, but he is not handing down an official mandate or policy on how to proceed.

“We are leaving it up to each individual chief. But, it is important to note marijuana is not legal. Merely because BCI (Ohio Bureau of Criminal Investigation) cannot perform testing at this time, doesn’t mean it won’t be conducted later. Police can confiscate the suspected marijuana and wait for BCI to get the equipment up and the training done, and then have it tested or not,” Gains said. “Anyone who gets pulled over, depending on the amount, will have to wait six months to two years for that knock on their door. You might have to wait two years for that knock on the door, but there is a good chance it is coming. So anyone who thinks it is legalized is wrong.”

McLaughlin said the marijuana will be seized and held until testing can be done.

Law enforcement must also consider other conditions for low-level marijuana cases, Gains said. If someone is caught with marijuana and he or she has a concealed carry permit, “You will lose it,” Gains said. “We are bound to enforce the law.”

“As far as the sheriff’s office is concerned, after consulting with the prosecutor’s office, we will continue business as usual. We will call on the AG to ensure they have testing equipment to do qualitative analysis of marijuana that is seized on the streets. I have been charged with enforcing the laws of the state of Ohio and that is what we’re going to do. We are not slowing down a bit,” Monroe said.

Each case coming before prosecutors in Warren Municipal Court will be evaluated on an individual basis, Hicks said.

Small amounts of marijuana might not make the cut for charges in the short run, Hicks said. Prosecutors in the municipal court may move to dismiss pending marijuana charges active in the court now because the cannabis seized by police officers is unlikely to be tested in time for the cases to be adjudicated in a timely manner, Hicks said.

“But we can pursue the alternative charges that are often associated with marijuana cases. We may dismiss the charge of possession of marijuana, but will still pursue the paraphernalia charge. Paraphernalia is still illegal, too,” Hick said.

Mark Fortunato, Canfield’s prosecuting attorney and law director, said his office is in the middle of revamping the city’s laws on marijuana in light of the state’s medical marijuana laws and the testing issue.

But “we may use a policy similar to the one Franklin County implemented and wait on pursuing these cases until it is sorted out,” Fritz said. “We may make a decision on a case-by-case basis. But we aren’t taking the position that we will stop issuing citations. We aren’t at that level yet.”

“The fact of the matter is a prosecutor can’t take a case to court without having the lab test that showed that it’s got a prohibited level of THC. Now, nobody is going to be interested in doing that on a small marijuana case,” Yost said.

In Ohio since the 1980s, a person cannot be arrested for having up to 100 grams of marijuana, but faces a $150 fine and collateral sanctions, Yost said.

“The notion we’ve got people in jail because they had one marijuana cigarette in their pocket, they had a joint in their pocket when they got stopped for a traffic citation just isn’t true. That can’t happen in Ohio for possession of less than 100 grams,” Yost said.

One hundred grams of marijuana is enough weed to get one person high every day for a month.

“So the real issue is not the guy that’s got a little Baggie in the dashboard of his car or the stash box at home, the real problem is traffickers, the people bringing marijuana illegally into our communities,” Yost said.

So in the meantime, Yost’s office has set aside $50,000 to reimburse law enforcement the cost of testing to differentiate hemp from marijuana in felony cases — cases that qualify a person for prison — at an outside accredited lab. Local law enforcement can still have the tests done on a misdemeanor charge or a felony that doesn’t qualify for prison, but they will bear the cost of the test.

Both chambers in the General Assembly overwhelmingly approved Senate Bill 57. The vote was 89-3 in the House and 31-0 in the Senate. Every single member of the Mahoning Valley delegation voted in favor of the bill’s passage.

“When you look at Trumbull County, No. 1, and you look at the state, No. 2, we are a vast agricultural state. A lot of the agricultural states have moved toward this direction pretty quickly and nimbly since the farm bill passed, and we wanted our farmers to be able to participate,” said state Rep. Gil Blair, D-Weathersfield.

Upcoming on the farming front

The Ohio Department of Agriculture has six months to write the rules and regulations regarding cultivation and processing of hemp. It’s hoped the first hemp crop can be planted in Ohio in 2020, Higgins said.

To grow hemp, farmers will need a license, which also will be required for processors and some research facilities, according to ODA.

Higgins said he expects farmers to temper their approach toward hemp. The industry is expected to start small as farmers learn if hemp will work for their type of soil and climate, and what in terms of manpower and machinery is needed to grow and cultivate the plant.

“These first couple of years will be trial and error until we ramp up to see how big hemp can be in Ohio agriculture,” Higgins said.