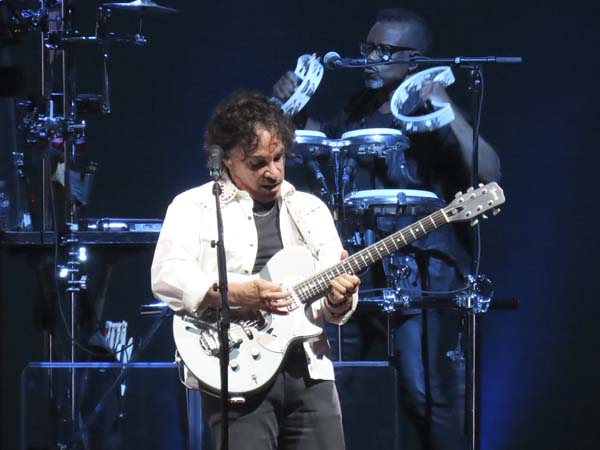 YOUNGSTOWN — Daryl Hall and John Oates could bombard an audience with one hit after another in their tight, radio-friendly renditions and never have to dip into the album tracks.

On Wednesday at the Covelli Centre, the duo didn’t skimp on the hits. All six No. 1 singles made the setlist as well as another seven that peaked in the top 10.

But the pair and their six-member band expanded on those songs, exploring different musical avenues within their pop structures. At 100 minutes, the set wasn’t short, but it had only 15 songs, and 11 in the first 80 minutes or so. There was some chatter by Hall or Oates in between some numbers, but some of those four-minute singles doubled in length.

Hall played with his vocal phrasing and tinkered with the melody of “Sara Smile” while accompanying himself on a grand piano, and Oates took several guitar solos on “Is It a Star.”

I’m sure there were concertgoers hoping to hear hits like “Family Man,” “Did It in a Minute” or “Everything Your Heart Desires,” but there was little to find fault with in Wednesday’s performance.

There is a sense that, at this point in their lives, Hall and Oates are co-workers, not the romanticized brothers in arms that many fans imagine bandmates to be. They don’t interact much on stage. Good luck to photographers trying to get a shot of both in the same frame without a chasm of at least 6 feet between them.

That might be one of the reasons the older songs stood out at the Covelli Centre, like 1973’s “She’s Gone” or the cover of the Barry Mann-and-Cynthia Weil-penned “You’ve Lost That Lovin’ Feelin.” Those songs were true duets, Hall’s and Oates’ voices playing off one another and meshing as one.

The ’80s hits are Hall singing lead with Oates somewhat buried as just another backing voice. While that was an undeniably successful formula commercially, it’s not always as satisfying live.

Anyone doubting what a commercial juggernaut the duo was in the late ’70s / early ’80s just needed to catch the last half hour. “I Can’t Go for That” closed the main set, while a bounty of hits — “Rich Girl,” “Kiss on My List,” “Private Eyes,” “You Make My Dreams” — filled the encore and were greeted with sing- alongs and dancing by the near-capacity crowd.

The MVP of the night not named Hall or Oates was Charlie DeChant, who has been in the band since 1976. His iconic saxophone solo on the opening song, “Maneater,” didn’t disappoint, and with the extended arrangements, his contributions shined on nearly every song, whether it was his soprano sax on “She’s Gone” or his flute-playing on “I Can’t Go for That (No Can Do).”

G. Love and Special Sauce opened the show, and frontman Garrett Dutton (G. Love) took a smart approach to crafting a setlist for an audience filled with people older than his usual crowd and seeing him for the first time.

He started with a couple of acoustic blues numbers played solo and threw in a cover of Paul Simon’s “50 Ways to Leave Your Lover” with his rhythm section — Jeffrey Clemens, drums, and Jim Prescott, bass — before veering into the more hip hop-flavored songs in his catalog.

G. Love’s influences are similar to the ones heard in Oates’ solo material, but no radio station would play him alongside “Kiss on My List.” However, he was able to win over many with his 48-minute set.