Bus safety rules stressed as schools go back in session 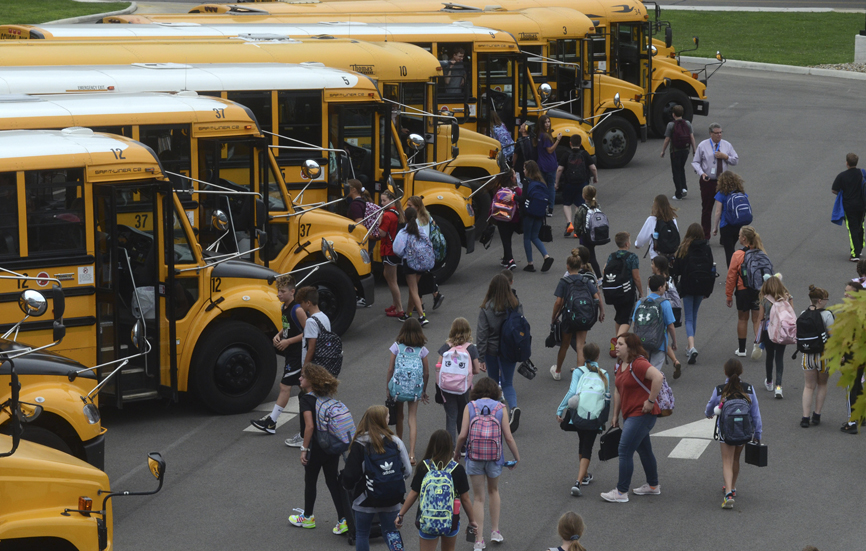 Tribune Chronicle / R. Michael Semple Lakeview Middle School students head to their buses Thursday at the end of the school day. Penalties for violating school bus safety rules could get stiffer with a new bill introduced in the Ohio Senate.

Stiffer penalties may be coming down the road for drivers who don’t follow school bus safety laws.

Between 2016 and 2018, 284 crashes involved a school bus in northeast Ohio — including 77 in Mahoning County and 64 in Trumbull County — according to the Ohio Department of Public Safety.

Keeping this in mind, drivers are asked to adhere to the rules of the road when around school buses and children making their way to and from school.

It is illegal in all 50 states to pass a school bus that is stopped with its red lights on to load or unload children, according to the National Council of Safety.

The NCS advises drivers to remember to allow a greater following distance — stopping at least 10 feet from a bus — and to be alert.

Drivers must stop on both sides of the road unless the road has four or more lanes or has a physical divider, AAA adds.

“We see this a lot on (U.S. Route) 422. Bus drivers will call us saying a car didn’t stop, but if the bus is going south and the car is coming north, the car doesn’t have to stop,” Girard police Chief John Norman said. “It’s not bad if they do stop, but they can continue on.”

“In the last five years, 68 people under the age of 18 were killed going to or from school, and 13 were killed last year alone. We noticed a spike in the hours of 3 to 4 p.m. and on Thursdays and Fridays,” said ODOT press secretary Matt Bruning.

Bruning also reminded not only drivers, but pedestrians as well to “see and be seen.

“Be alert of your surroundings. And for drivers, drive with your headlights on as an extra layer of visibility,” Bruning said.

“School-zone speed limits and crossing guards are in place to save lives,” Miller said. “Everyone needs to keep the lives of young students in mind as they make their way through school zones, and especially near crosswalks.”