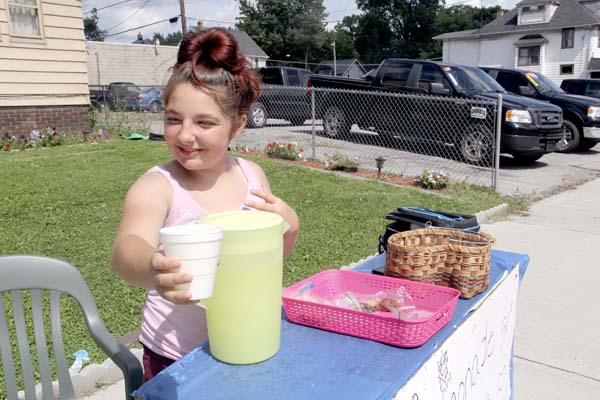 Jayden Gross, 13, of Warren serves a glass of lemonade Wednesday afternoon. Gross sits outside her Youngstown-Warren Road home almost every day selling 25 cent cups of lemonade and baked goods to make money to help around the house, get gifts for her brothers, and save up for an electric scooter.

Jayden said she does it “just so I can make money sometimes, so we can go do stuff,” but her mother, Stephanie Goss, said Jayden also does good with her lemonade stand, giving free lemonade to police officers and construction workers who cross her path.

On Veterans Day, Jayden offered free lemonade and cookies to all veterans.

“She always does good if anybody needs anything,” Stephanie Goss said.

Jayden also spent some of her hard-earned money buying ice cream and stuffed animals for her little brother, who recently had surgery.

“I went and bought us all ice cream because that’s all he can eat,” Jayden said.

She said one day she got the idea to have a lemonade stand — she’d seen other people doing them and saw videos on YouTube — and went for it. She’s been selling almost every day for the past three summers, and plans on continuing the business next year.

“She’s been doing it for years. She makes her own money, helps out,” Stephanie Goss said. “I’m proud of her.”

On Wednesday, Jayden was anticipating a visit from a group of motorcyclists called the Soulless Nomads, who promised to visit her stand after one member stopped by and saw her enthusiasm.

In the past, two different ambulance services brought whole crews out for lemonade. Once, a local rapper gave Jayden $100 in support of her enterprise, she said.

Jayden said she someday wants to open a bakery.

“She loves to bake,” Stephanie Goss said. Jayden bakes cookies and makes the lemonade herself, occasionally asking her mother for help. She mans her stand all day, Stephanie said, sometimes starting as early as 10 a.m. and working until 8:30 p.m. She does it rain or shine, sometimes sitting with an umbrella.

Jayden said so far this year, she’s made almost $400. She said she is saving up some of her profits to buy herself an electric scooter.