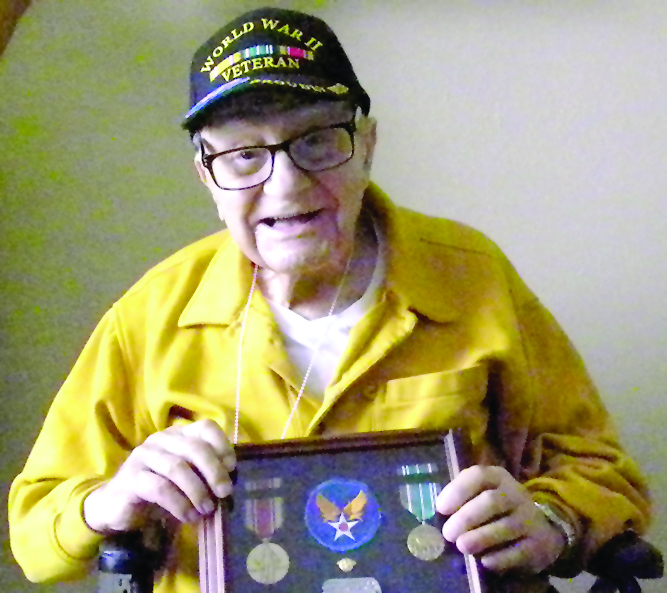 Editor’s note: This is part of a series published each Monday between Memorial Day and Veterans Day honoring local veterans. To nominate a veteran, email Metro Editor Marly Kosinski at mkosinski @tribtoday.com.

BROOKFIELD — Pasquale “Pat” Nicastro, 98, never saw battle during World War II, but he did reconnect with a family friend in Egypt.

He knew he was going to be drafted into the war, so he enlisted before his number was called and served from Jan. 31, 1944, through May 3, 1946, in the Army Air Corps — a division that later evolved into the U.S. Air Force.

He was deployed to northern Egypt, where he was trained to help land planes. The planes carried bombs, rations, artillery and other supplies for the Allied soldiers.

“I remember it like it was yesterday,” Nicastro said. “We never lost a plane.”

Nicastro said his job was challenging because North Africa gets a lot of sand storms, but he received special training so he could help ensure the planes didn’t crash. Although his team never lost a plane, Nicastro recalls losing a soldier in an accident.

“It was his fault; we tried to guide him,” Nicastro said. “There was lots of smoke. We kept saying no, no, no…”

In 1945, Nicastro’s father, Lorenzo, who served in World War I, read in a Pittsburgh newspaper that Italian soldiers were being held in a British prison in North Africa. Lorenzo wrote his son a letter stating a family friend from Italy, Arturo, was one of the soldiers held in the prison and Nicastro should check to ensure Arturo was doing alright and had enough money. Nicastro knew of Arturo because his mother, Maria, had baptized him when he was a child.

With the permission of his commander, while on furlough Nicastro was allowed to visit the prison.

“There was a line up to see the Americans,” Nicastro said. “We went into a room and an Italian sergeant translated for me.”

Arturo had made a bracelet as a part of his job at the prison, and gave it to Nicastro to give to his mother. The bracelet was made out of Egyptian coins.

Although Arturo gave Nicastro a gift, he wasn’t allowed to give Arturo anything. Wanting to obey his father, Nicastro snuck in some money for Arturo.

“I shook his hand and snuck about $20,” Nicastro said. “I wasn’t scared, but I didn’t know what would happen if I got caught.”

After the war ended, Nicastro was among the soldiers in 1946 in New York City who was greeted with a ticker-tape parade when they docked. He, along with his wife and son, moved to Farrell, Pa., where he joined the American Legion and the local Veterans of Foreign Wars.

Nicastro retired from Federal Wholesale in Hubbard in 1991 at the age of 70.