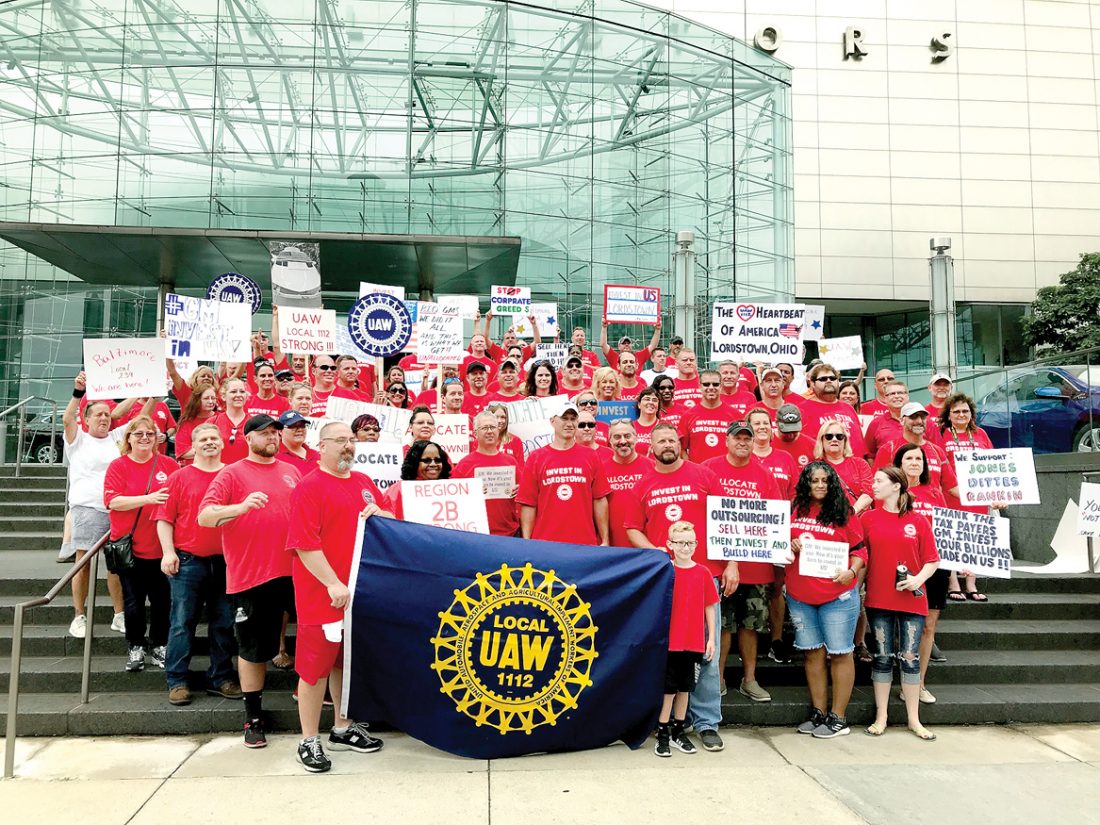 Two charter busloads of United Auto Workers Local 1112 members from the now-idled General Motors Lordstown Assembly Plant were among 200 UAW members who rallied Tuesday outside the Detroit Marriott, where contract talks began with GM. The local contingent, wearing red shirts with white lettering, is trying to convince GM management to reinvest in the Lordstown facility, which stopped production on the Chevrolet Cruze March 6, and allocate a new vehicle there. Special to the Tribune Chronicle

LORDSTOWN — United Auto Workers President Gary Jones opened contract talks with General Motors reminding the automaker of what the union has repeatedly said since GM announced it would close four U.S. plants, including its assembly plant in Lordstown.

“We invested in you, now it’s your turn to invest in us,” Jones said, according to prepared remarks posted to UAW’s website.

That was partly why more than two charter busloads of UAW Local 1112 members at the now-closed Lordstown facility and others went to rally outside the Detroit Marriott, where talks ceremoniously began Tuesday — to urge GM to reinvest in the plant and reopen it with a new vehicle.

Contract talks among Detroit’s three automakers — GM, Ford and Fiat Chrysler — and the union representing 142,000 workers across the U.S. began Monday with Ford. Negotiations with GM and Fiat Chrysler began Tuesday. The union’s four-year contract with all three expires at 11:59 p.m. Sept. 14.

About 200 people rallied outside the Marriott, Morgan said. The group was made up of workers from GM plants in Toledo and Parma, and Flint and Grand Rapids in Michigan.

Local 1112 members wore red shirts with “Allocate Lordstown” and “Invest in Lordstown” in white letters across the front.

Morgan said he expects negotiations to be difficult.

“I think this will be one of the toughest sets of negotiations that we go through from the last two or three. It’s going to be really tough and GM is playing hardball because with them even walking in the door Nov. 26, 2018, and saying, ‘hey, you’re unallocated, we’re shutting this place down,’ that’s like an old-school tactic,” Morgan said.

Coming into the talks, the automakers are looking to trim hourly labor costs, which have grown, to be closer to plants at their foreign-based competitors. The average at those plants is $50 per hour compared to $55 per hour at Fiat Chrysler, $61 at Ford and $63 at GM.

Automakers want costs to be closer to their competitors so they don’t have to charge higher prices or reduce profits like they did before the Great Recession. Higher labor costs were among the reasons GM and Fiat Chrysler needed government bailouts and bankruptcy protection in 2009.

Also the automakers would like UAW to help reduce health care costs.

Still, the Big Three posted more than $15 billion in net profits last year, and workers want to see more of that in their paychecks. Workers would like to shift more of their pay from profit sharing, which can fall in a downturn, to hourly raises.

GM CEO Mary Barra said employees “play a critical role” in the automaker’s success and she’s excited about the opportunities ahead that will let GM and the UAW “lead the transformation of the auto industry.”

Casting a shadow over the UAW / GM talks is a pair of lawsuits the union filed against GM this year — one to stop the closing of Lordstown and two other plants the automaker unallocated, and the other that accuses GM of incorrectly using temporary employees at one of its plants instead of transferring workers from Lordstown there.

GM is also in talks with a Cincinnati-based startup to purchase the sprawling production facility to make electric fleet pickup trucks. A great deal of skepticism from local automakers and officials surrounds the proposal, however.

GM announced in November it planned to “unallocate” the four U.S. plants in a move toward making trucks, SUVs, and electric and autonomous vehicles. The last Chevrolet Cruze, produced at Lordstown for about 10 years, came off the production line March 6.