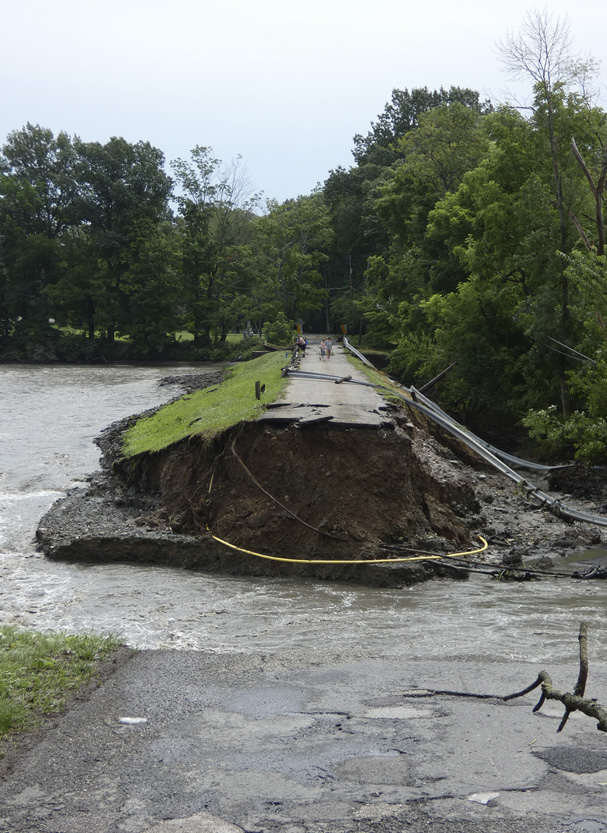 Tribune Chronicle / Andy Gray A portion of Lakeview Drive that is the only access road for more than 30 homes on the east side of Kinsman Lake was washed away Saturday morning after heavy rains. It washed out between 7:30 and 8 a.m., leaving the residents stranded. They were evacuated by safety personnel on all-terrain rescue vehicles and taken to a place where they could be loaded onto a school bus and transported to Kinsman Presbyterian Church and Kinsman United Methodist Church.

KINSMAN — Crews evacuated more than 30 families Saturday who live around Kinsman Lake after flash flooding destroyed the only access road to their properties.

Trumbull County Engineer Randy Smith said the damage — from an infrastructure standpoint — was the worst he’s seen in the county since the 1985 tornadoes, and it probably will be at least a month before the evacuees can return home.

“We have about a dozen culverts or bridges that were either washed out in entirety or in part,” Smith said. “One bridge lost an entire abutment.”

Damage also was reported in Greene and Gustavus, Smith said, but Kinsman took the brunt of it.

Lt. Jared Sutton of the Ohio State Highway Patrol in Southington said, “Preliminary estimates are $1 million-plus in damage. That’s to roads. That doesn’t have anything to do with residences or anything like that. The only positive that I can think of in this situation is we have no reported injuries.”

A portion of Lakeview Drive, which wraps around Kinsman Lake, collapsed between 7:30 and 8 a.m. Saturday. Trustee Greg Leonhard lives on Lakeview Drive and noticed the pooling in his yard at 7 a.m. and how the lake was cresting, something he hadn’t seen since moving there in 1990.

“Water was flowing from one end of the dam to the other, flowing over the whole span like the river of Niagara,” he said.

The ground near the dam began to collapse, and the rushing water quickly eroded the lake shore, tearing down trees and power lines with it and severing the natural gas line along the road.

With the only access road to the east side of the lake destroyed, crews from fire departments in Trumbull, Ashtabula and Geauga counties used all-terrain rescue vehicles to transport residents to a place where they could be loaded onto a school bus and taken to Kinsman Presbyterian Church and Kinsman United Methodist Church. Sutton said several residents also volunteered the use of their ATVs for the evacuation.

Early Saturday afternoon there were reports of gunshots during the evacuation effort.

Dona Yakubik, one of the first evacuees, said, “We got shot at. That lady was shooting a gun at us. She didn’t want nobody on her property.”

According to state Sen. Sean O’Brien, D-Bazetta, who was on the scene, the shots were fired in the air by an elderly resident who wasn’t aware of the evacuation at the time and thought the people were trespassing.

Those who live on the now inaccessible part of Lakeview Drive said Saturday they hoped they would be away from their homes for only one or two weeks. Smith was less encouraging.

“After meeting with our emergency contractor, the best-case scenario if all the stars align is four weeks,” Smith said.

If there are additional problems with water or permit issues, the road might not be open for 60 days. And while Smith said he couldn’t speak for the gas and electric companies, it might be difficult to restore utilities temporarily before the road work is completed.

Smith encouraged drivers to pay attention to road and lane closures in the area while repairs are underway.

“The barrels are out for a reason,” he said. “The pavement might look in good shape, but underneath it’s undermined. That’s why the barrels are there.”

Smith will submit a report by Tuesday morning with an estimate for the total cost of repairing the road, bridge and culvert damage from the storm. He estimated one of the damaged bridge repairs at $800,000.

Whatever the final estimate is, it exceeds the township’s funds.

“Obviously, it’s going to take more than what Kinsman has the resources for,” Leonhard said. “We’re going to need help from the government above.”

O’Brien said he’s already been in contact with Gov. Mike DeWine’s office and the president of the Ohio Senate.

“Once we get the assessment from Randy (Smith) and see how much that will cost, we’ll contact the governor’s office for disaster relief, if possible, and see how much we can get,” O’Brien said. “It will be all hands on deck in Columbus to see what we can do to alleviate some of the economic hardship.”