County engineer wants to run temporary road to get across lake 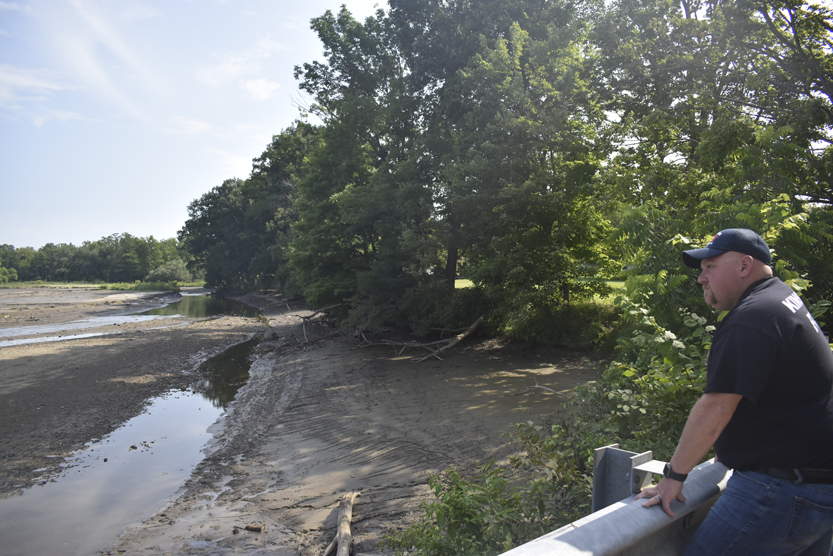 Tribune Chronicle / Renee Fox Kinsman fire Chief Cory VanKanegan looks over what used to be Kinsman Lake. Without the dam, the area has a stream running over the muddy bottom. Nearly 8 inches of rain fell in a 24-hour period before the dam broke Saturday morning, flooding homes along Stratton Creek and the manmade lake.

KINSMAN — Tree trunks, mud, parts of bridges and other debris still littered Stratton Creek on Wednesday — four days after the usually docile creek overflowed its banks and rushed into Kinsman Lake on Saturday.

The rushing water tore out the earthen dam and road, and flooded homes along the creek and manmade lake. The creek level rose so high it filled Richard Leonhard’s basement and submerged his first floor with 6 to 8 inches of water.

Leonhard’s house isn’t on the lake, but Stratton Creek is in his backyard. Approximately two dozen homes were cut off from the road in and out of the eastside of the Lakeland development on Lakeview and Golf drives, and others on the westside of the lake experienced flood damage from the overflowing lake.

Nearly 8 inches of rain fell in a 24-hour period before the dam broke Saturday morning, and evacuations began.

“The water was so high in the basement his washer and dryer were floating up by the ceiling,” said Greg Leonhard, Richard’s son and a Kinsman trustee.

A branch went through his roof and estimates for the water damage that left his house smelling musty and his carpets soaked are at $30,000 to $40,000, he said.

“And that’s if there isn’t mold behind the drywall,” Greg Leonhard said.

Mud, silt and sand crust his yard and is deposited all along the creek bed, which is now crowded with trees scattered in all directions and their leaves still green.

Crews from the Ohio Department of Transportation were working in various areas along state Route 5, repairing washed out areas that left chunks of concrete and rebar twisted and out of place. Some crops were damaged, too, Greg Leonhard said.

Trumbull County Engineer Randy Smith wants to run a temporary access road from the area of collapse down into the lake at an angle to meet up with the part of the road on the dam that did not collapse. The temporary fix would allow people to get their vehicles and start to clean up their homes.

It would cost nearly $1 million and could be done in a few days, Smith said, but he needs funding first.

Water is still flowing into the lake, but it flows right out of it into a stream. The stream has large deposits of mud, rocks and trees in it that were never there, Vankanegan said. Mangled utility poles still hang askew.

After hearing from Smith, who gave the representatives, ODOT officials, Ohio Emergency Management officials and local residents a status report on the western side of the lake, Thompson and VanKanegan drove some of the group to tour the damage on the eastern side of Kinsman Lake on all-terrain vehicles.

While a land owner gave township officials permission to use her fields to get into the woods and the development, safety service officials like VanKanegan are warning others not to go back into the area through the woods. There were footprints in the mud of the lake bed and people were spotted who shouldn’t have been over there, VanKanegan said. People who violate the order could be arrested.

On the west side of the lake, a large trash truck was taking in flood-damaged materials from homes around the lake that are accessible. Flooding destroyed a lot of property, but private property damage estimates for the natural disaster aren’t in yet, Smith said.

Public infrastructure in other parts of the township and in neighboring townships also was damaged. The total estimated cost for the public property damage is about $3.5 million, Smith said.

The dam itself is owned by the Lakeland Homeowner’s Association, while the county owns the road on it and the township maintains it, Smith said.

Well, contamination and sanitary sewer issues still need to be addressed, he said. Once funding is secured from the state, permanent fixes can proceed.

“It is going to take a lot of fill,” Smith said.

The fill will have to be compacted and once the dam starts to be constructed, the lake will begin to fill with water again, which may complicate things, Smith said.

Smith met later with representatives from the Ohio Department of Natural Resources, which may take jurisdiction over dam repairs.

He said he told ODNR, “This needs to be a quick turnaround.”

Anyone with damage can call Help Network of Northeast Ohio at 2-1-1, to report it.