Warren FOP to the rescue 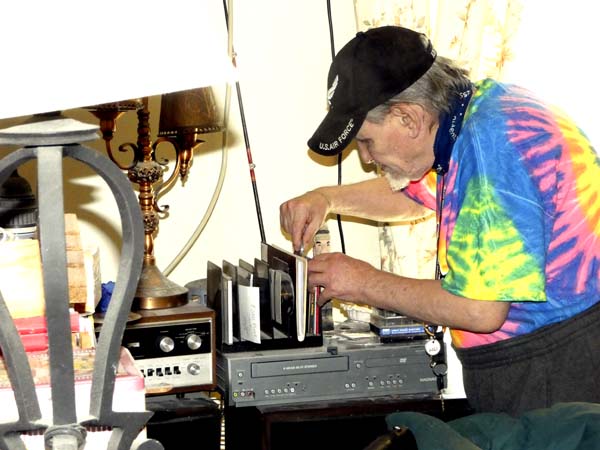 U.S. Air Force veteran Jeffrey Howe looks through items that need to be boxed and moved from his apartment to his new residence at Tod’s Crossing apartments. Photo by Raymond L. Smith

WARREN — U.S. Air Force veteran Jeffrey Howe has been trying to move from his one-bedroom, fifth-floor apartment at The Elms apartments for nearly a month.

However, each time, something would happen to delay the move.

On Tuesday, when representatives of a local moving company came to his apartment and saw loose clothing, boxes of food and other items thrown around the apartment, they told him they could not do the move.

Howe is making the move because The Elms apartments, 2300 Plaza Drive NE, is undergoing an extensive renovation, which is expected to require tenants to move multiple times from one area of the building to another as the work is being done.

It is something Howe decided he was unwilling to do.

“I was considering moving for about a year,” Howe said. “This helped to make the decision for me. I do not want to live out of boxes for months at a time.”

Moving is difficult for almost everyone, but for Howe — whose apartment is filled with momentoes, fishing equipment, pool sticks and what seems like a lifetime’s worth of books, magazines and hundreds of VHS tapes, as well as a bird named Bud — any move is something that takes time and a lot of effort.

Dave Raach, a senior service specialist with the Warren SCOPE Center, has been working with Howe for several months to complete the move.

“I think it is pretty safe to call Jeffrey a hoarder, so it’ll take a lot,” Raach said.

They reached out to two separate moving companies, and neither would do the move.

“It seemed like they didn’t want to do it,” Howe said.

Raach said Trumbull Metropolitan Housing Authority officials have been very understanding of the problems Howe has faced to find a place and then getting the help needed to do the actual move.

“Finding reasonably priced housing is difficult,” Raach said. “Places have waiting lists of six months to a year and have rents that are significantly higher.”

The Elms is a subsidized apartment complex that requires its residents to pay about 30 percent of their incomes.

Earlier this week, Raach mentioned what has been happening to Ginny Pasha, president of the United Way of Trumbull County.

A few hours and phone calls later, Pasha reached out to Warren police Chief Eric Merkel to see what he could do to help. Merkel, in turn, called police detective Brian Crites, president of Warren’s Fraternal Order of Police chapter, to see if they would help.

Grateful for all of the help provided by the United Way and by the Warren police officers that volunteered their time, Raach questioned whether the move could have been done without them.

“This was a great mix of good people willing to give of themselves for someone needing help,” Raach said. “We did not move everything, but we got most of the larger furniture pieces, including a couch and his bed. We have time to get other items. He has a place to sit and to sleep.

“We’re so appreciative,” he continued. “The help provided by these officers was incredible.”