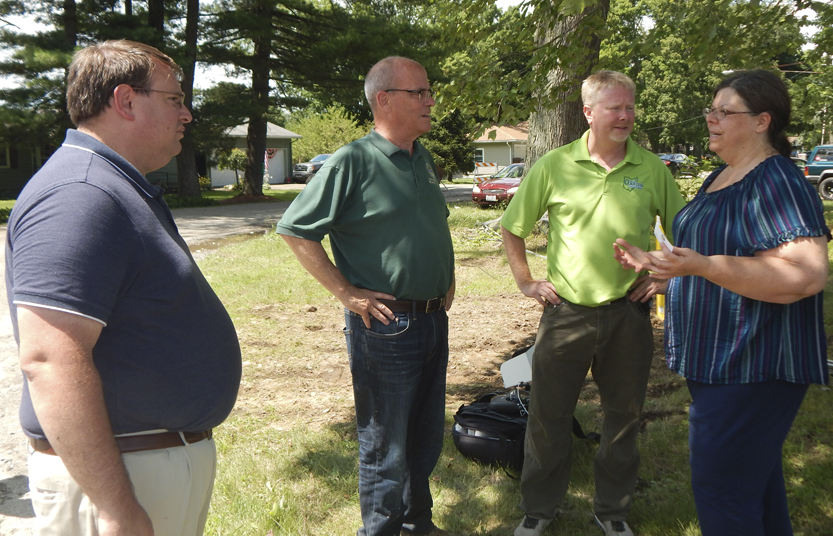 KINSMAN — Kinsman residents Dustin and Elizabeth Wayner said they could not believe what they saw Saturday morning at their Main Street home as water as high as their waists gushed through their yard and home.

“When I looked out, a washer from someone’s house was floating in our yard,” Dustin Wayner said. “We lost a lot of children’s toys, which floated away.”

The Wayners along with about 25 other people met Sunday with representatives of the American Red Cross to see what they could do for assistance for those homes affected by heavy flooding Saturday.

The Red Cross had set up inside the Kinsman Presbyterian Church, where bottles of water, canned goods and other nonperishable food items were placed on tables.

Dustin Wayner said the flooding took out the fencing in their backyard, and killed their hot water heater and furnace in the basement.

“My neighbor (told) us of what was happening. When I looked outside, it was really bad,” he said of the mud-colored water in the yard.

Elizabeth Wayner said the water was as level as their back porch.

“We had some flooding last year but it was not as bad as this year. This year was terrible,” Dustin Wayner said.

Richard Leonhard of state Route 7, who has lived at his home 40 years, said his basement had water up to the ceiling and the main floor of the house had three to four inches of water.

“The basement was totally filled with water up to the rafters, and then the water came up to the first floor,” he said.

Leonhard said he has two sump pumps that were not able to stop all the water.

Frankie Morris of Golf Drive was one of the residents who was evacuated from her home.

“A friend of mine saw the damage on Facebook. I didn’t know at first what had happened until they told me the road had collapsed. I had no way out,” Morris said.

The Lakeview Drive bridge is the only access to about 30 homes on Lakeview and Golf drives across Kinsman Lake. Officials said they did not put boats in the lake Saturday out of concern that live power lines may have fallen into the lake. Morris said the fire department took her out on a four-wheeler.

“They told us to take what we wanted with us. I have a suitcase with clothes and medical equipment, and that is it,” Morris said.

“We are here to help families recover. We will help assist and direct them for medical issues, mental health issues, clothing and whatever assistance they need,” Finlaw said.

She said there have been families whose homes are flooded, their basements have collapsed and others who had to be evacuated.

Finlaw said the Red Cross will be at the Kinsman Presbyterian Church from 1 to 3 p.m. today for anyone needing assistance, or they can call the office in Liberty at 330-392-2551.

“We will do a lot of continued work with the families for months after this. We don’t just come in one day and are gone the next. We help them until they are recovered,” she said.

She said families may also contact local churches where they can help.

Nancy Ruby, who lives on Lakeview Drive, said she lost 60 feet of her backyard when the road collapsed.

“We have been cleaning out the house. We have trees that have fallen, which is scary. We lost a lot of the yard when it collapsed,” she said.

Ruby said she heard another house down the river is gone.

She said she was happy her family was safe.

Her son, Nate Ruby, said they were not home when the road collapsed.

Howland resident Barbara Rosenblum, who used to live on Lakeview Drive in Kinsman, said she was shocked when she heard what happened. She showed up Sunday to see what she could do to help.

“I saw this on the news and couldn’t believe it. It was a nice neighborhood. I could not believe what happened now that I am here,” she said.