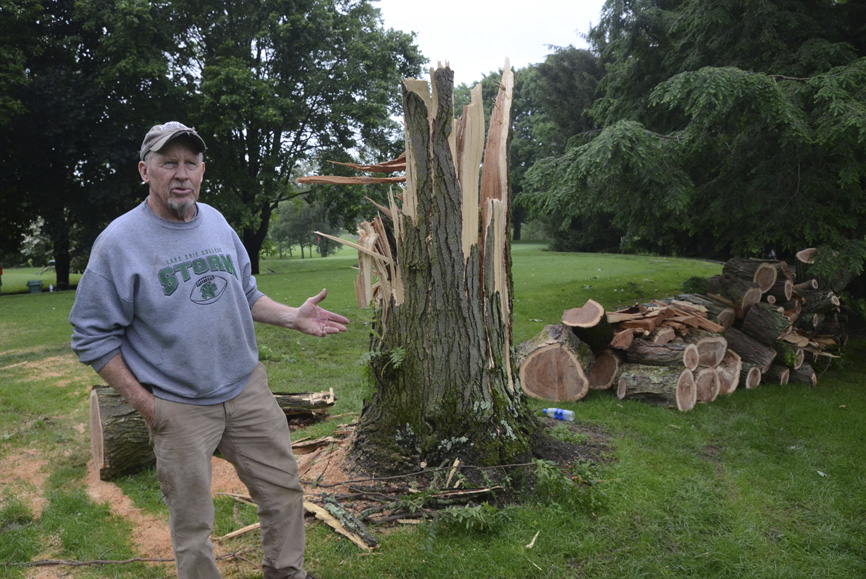 Tribune Chronicle / R. Michael Semple Gary McMullin, owner and superintendent of Yankee Run Golf Course, talks Monday about tornado damage caused late Sunday afternoon to the Brookfield golf course. McMullin is standing next to a tree that was ripped apart next to the tee box for Hole No. 2 at the course.

BROOKFIELD — Volunteers were kept busy Monday removing debris from the Yankee Run Golf Course after a Sunday afternoon tornado damaged thousands of trees along the course.

Gary McMullin, owner and superintendent for the course, said the spring already had been difficult on the course with all the rain. Now with the tornado damage, he’ll be closed for most of the week, he said.

McMullin said he was in the clubhouse when he saw a tornado move east across the course.

“We went out after, and it was bad,” McMullin said. “There’s probably 300, 400 trees down on the playing area and probably another thousand or so in the back with their tops off, laying on wires.”

McMullin said volunteers started showing up with their chain saws almost immediately after the storm ended. They cleared the paths and began cleaning up the debris.

“It looks a lot better, believe it or not,” he said Monday. “The help has been off the charts. They’ve been running those chain saws since 8 a.m. It’s phenomenal.”

According to Shane Stelk at the Brookfield Fire Department, the township mainly saw damage between state Route 82 and Warren Sharon road, east of state Route 7.

Stelk says he was coming back from a call when he saw the funnel going over state Route 82 shortly before 5 p.m.

The department responded to 30 storm-related calls between 5 p.m. and 10 p.m., he said. There was some structural damage, but most of the wreckage came from trees.

David Baldwin, who moved to Bedford Road in Brookfield just more than a year ago, was at a Father’s Day cookout in Warren when he saw damage from that tornado. Hearing that Brookfield was hit, he came home around 4 p.m. to trees down and the power line to his home and some siding pulled down. The wire was still live.

“Ohio Edison is on top of it. They’re everywhere today,” Baldwin said. “This could’ve been so much worse.”

“This is a major loss, and our main shop had significant roof damage as well,” comptroller Dave Pringle said. “It’s just cleanup for now, but jobs will not be halted.”

The National Weather Service came to inspect the area and confirmed that damage was caused by an EF-1 tornado.

“It traveled from the Portage-Trumbull line in an east / southeast direction but looped around and meandered,” Sarah Jamison, meteorologist with the National Weather Service in Cleveland, said.

She said she couldn’t confirm it, but she believes the tornadoes in the Southington / Warren area and in the Brookfield area were from the same storm. “A storm can produce one to two tornadoes,” she said.

Ohio averages 22 tornadoes per season and so far this year, Ohio is well above that average, she said.

“There are active periods and El Nino enhances those,” Jamison said. “We’re in that active period and we have a long way to go before the end of the season.”

Jamison says Ohio’s tornado season is at its peak in June and July and spikes again in November.