Neighbors come together to clean up tornado damage in Warren 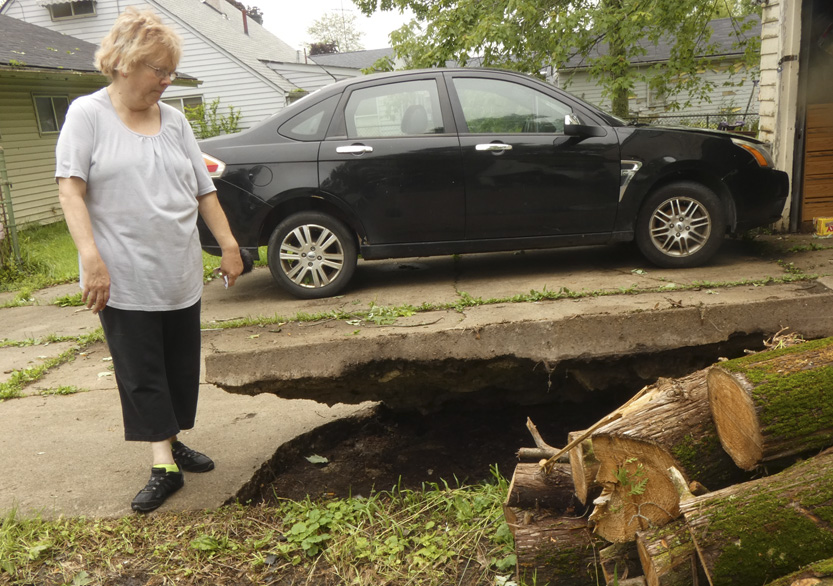 To see a slideshow of the cleanup from Sunday’s tornadoes, click here.

WARREN — A EF-1 tornado Sunday afternoon smashed large limbs from trees surrounding Charles T. and Angel Wargo’s 3060 Tod Ave. NW home onto the roof — damaging the home’s interior — and fencing. It was one of many homes damaged during the storm’s tour through parts of the city and northern Trumbull County.

The Wargos live in the home with one daughter, Miranda, and two great-grandchildren. Miranda said when the winds picked up, she ran outside and gathered the kids into the home’s bathroom to wait out the storm.

“It was like a sandstorm,” she said. “I couldn’t see anything.”

Robin Martorana, who owns a property across from the Wargos, said there must have been 35 to 40 people knocking on doors in the neighborhood after the tornado, making sure people were OK, starting up chain saws to remove trees and limbs, cleaning up debris, and providing food and shelter for those in need.

“There were off-duty police officers and firefighters out here and people who decided to leave their homes and help others in need,” she said. “There was a real sense of community spirit.”

Lisa Meixelberger, 3220 Tod Ave. NW, said she was in her backyard when she noticed the color of the sky changing and winds picking up. She saw a wide, light gray, swirling funnel cloud headed toward them. She ran for the house.

“There were toys and other things flying in the sky,” Meixelberger said. “It sounded like a freight train running over us.”

A few moments later, when the noise ended and her house stopped shaking, Meixelberger and her husband, Kevin, walked outside and saw tree limbs on the ground, other trees that were not uprooted but leaning toward the ground and a wood-fence panel knocked over.

“We were fortunate,” she said. “It was like God wrapped his arms around our house and protected it.”

Cindy Miner, 3234 Tod Ave. NW, said her daughter, Darlene, pulled all of the family together under a mattress. They huddled together and waited for the roar of the tornado to pass over them.

“It only took about a minute,” she said.

Warren Mayor Doug Franklin said the city had its safety forces out around the city within moments of the high winds passing through. They were especially in the hard-hit northwest side.

“There were extensive tree damage and power outages, including at my home,” Franklin said. “For many families, the power was out for about 4 1/2 hours, until about 10:30 p.m.”

Because of the number of trees lying on roadways, the city called out as many of its operations department employees to help clear the streets, he said.

Gary Stephens, 68, 3070 Tod Ave. NW, said he was in Austintown having a Father’s Day dinner with his family when he received a phone call from a neighbor.

“I was told I didn’t have to hurry, but I should come home,” Stephens said. “When I drove up to the house, I couldn’t get to it because of the fallen trees and limbs.”

He said a fallen tree damaged the southeast corner of the home he lived in for more than 30 years.

“The most important thing is there was no one hurt,” he said. “When I got there, there already were people out cutting trees.”

Karen Phillips, 3256 Tod Ave. NW, said the roof of her home’s carport was damaged and a large tree that had grown between her neighbor’s and her garage fell over. It pushed the neighbor’s garage off its foundation, causing it to lean on its side, and it pushed a large concrete slab up and off the ground.

Dwight Prowitt, owner of Powerpoint Electric Service Inc., described working in the neighborhood to make sure the exterior boxes on homes are connected properly so the electric company can reconnect power lines to the homes.

Mason’s house was one of many that was spared of significant damage.

“I have five trees surrounding my house, and none of them fell,” he said. “I was fortunate. I spent my time helping neighbors.”

WARREN — The average price for gasoline across northeast Ohio is 7 cents higher this week at $2.03 per gallon, ...

FOWLER — Township trustees on Monday approved extending through June 30 the hourly pay increases for all safety ...

On the record- Fowler