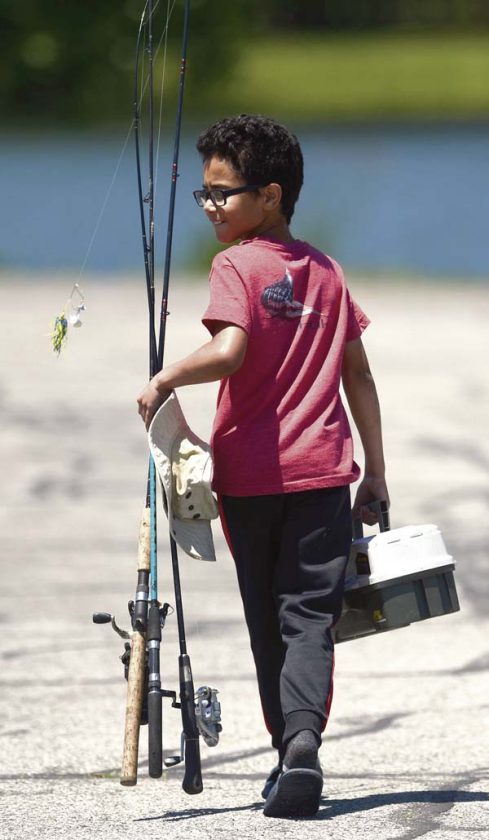 BAZETTA — The Mosquito Creek Lake was completed 75 years ago and this weekend, the U.S. Army Corps of Engineers is celebrating the milestone.

According to Josie McKenna, park manager for Mosquito Lake State Park, the lake provides the water supply for the city of Warren, as well as recreation, and pollution and flood control. At full capacity, it holds 34 billion gallons of water and covers 7,850 acres of land.

Before the lake was created, the area consisted of mostly farmland.

Louise List, treasurer for the Cortland-Bazetta Historical Society, said her family owned farmland and although she knows the lake used some of her family’s land, she doesn’t know how much. She does know that some of the land was sold to house St. Robert Catholic Church on state route 46.

“The creek went behind our property,” List said. “My brother built a cabin deep into the property. It might still be there.”

The man-made reservoir was completed in 1944 after 90 days of construction.

“The project began in August 1943, and we call the dam the ’90-day wonder’ because it was completed in 90 days. Usually they take a lot longer,” said William Spring, resource manager for the U.S. Army Corps of Engineers, which controls the lake. “They started filling up the lake in January of 1944, but we don’t consider it complete until it became fully operational at pool level. That was April 19, 1944.”

According to the Ohio Department of Natural Resources, plans for the Mosquito Creek dam began in the 1930s under the Federal Flood Control Act to control and lessen flooding on the Mahoning, Beaver and Ohio rivers. The FCA declared flood control a national priority as it endangered lives and property across the nation.

The U.S. Army Corps of Engineers headed the Mosquito Creek project and since its completion, it has saved the area hundreds of millions in flood damage.

“The project cost about $4 million and, in its 75 years, has saved $500 million in flood damage for the area,” Spring said. “It’s a return on taxpayers’ investments.”

Mosquito Lake is now surrounded by Mosquito Lake State Park and offers a variety of recreational opportunities both in the water and out. Activities on the lake include fishing, boating, swimming and sunbathing on the 600-foot beach. Dogs also have access to the lake at the Cooperation Station Dog Park.

To celebrate the 75th anniversary of the lake, the U.S. Army Corps of Engineers will hold an event on Saturday.

“The event will begin at 9 a.m. with tours of the dam as well as its history, statistics and how it operates. There also will be a ceremony at the resource manager’s office to recognize partners who support the mission of flood control, recreation, environmental stewardship and supplying water,” Spring said.

The corps also will dedicate a replica castle and a time capsule at the event. The time capsule will include several employee biographies from the past as well as the present and the public is invited to add items that showcase the impact the lake has on the community.

Jamison Conley, park ranger and natural resource specialist, will present more on the history and impact of the dam at his next presentation July 10 at the Johnston Senior Center, 5922 Warren Road, Cortland.