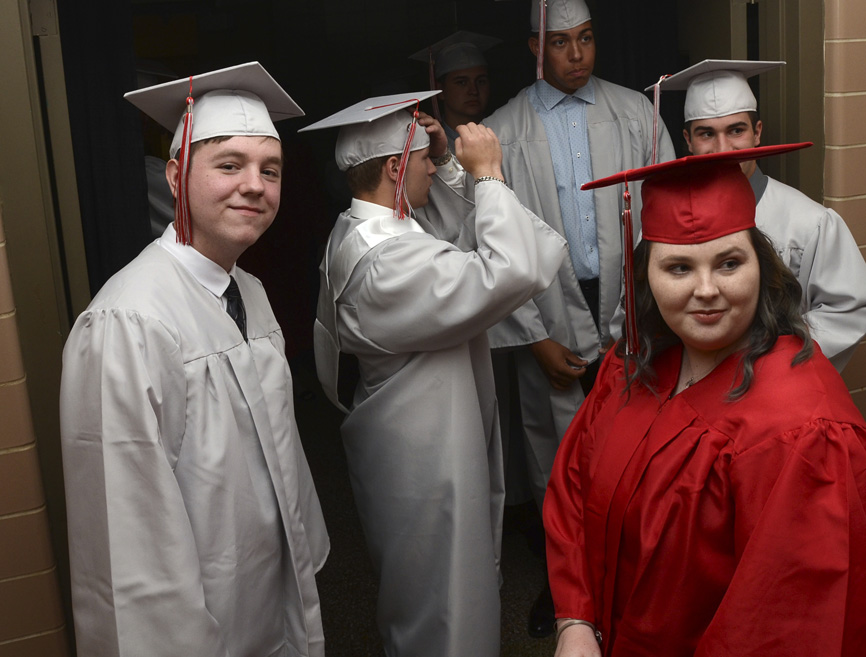 LEAVITTSBURG — “I never knew if I was going to be able to make it to my senior year,” 2019 LaBrae High School graduate Tanner Noble said. “That was the big question when I first got cancer.”

By December 2017, when he first reported to the Cleveland Clinic to try yet another treatment, the rare medullary thyroid cancer had spread to his neck, lungs, bones and liver.

“I saw at this rate, he would eventually have liver failure within three to six months,” pediatric hematologist-oncologist Peter M. Anderson, M.D., Ph.D., said. “I never told him that. I just told him it’s not looking good.”

He and his parents agreed that Tanner would become part of a clinical trial for a new medication that has yet to apply for FDA approval. It worked.

“His prognosis has gone from very, very bad to very, very good — perhaps even to excellent. In fact, I say he’ll live longer than me,” said Anderson, who is in his 60s. “He’s had a terrific, fantastic, outstandingly excellent response — with two exclamation points.”

Tanner, 19, credits both the LOXO-292 investigational medication and a positive attitude.

“I had two options — I either fight this or I die,” Tanner said.

“In my freshman year, after I found out I had cancer, I wasn’t really thinking I was going to die. I was more in a fighting mood,” Tanner said. “As it went on, I realized how challenging and difficult my case is. It’s not curable.

“Hope and strength — that’s the only thing I have is hope and strength,” he said. “Just being stronger than something that’s more powerful than you, it will impact the rest of your life. With my mindset, I can go farther than I imagined.”

It was around Christmas 2014 that Tanner was diagnosed with a genetic strain of cancer after months of unexplained problems.

“I was losing a tremendous amount of weight,” he said. “I thought I was becoming healthier and stronger. I was doing a lot of weights — but I was getting weaker, not stronger.

There were also situations that indicated possible stomach or liver issues. A football player, Tanner wanted to wait before seeing doctors. He didn’t want his freshman season derailed.

He underwent multiple tests that showed nothing out of the ordinary until finally one exploration led to the thyroid. The cancer was diagnosed and a series of treatments began. Surgeries included an 11-hour procedure in 2016 to remove his thyroid and lymph nodes. The cancer has spread to his liver, lung and spine, but he is receiving more tests.

The Leavittsburg community rallied around the Noble family with a series of “Tanner Tuff” fundraisers to offset uncovered medical costs and other expenses. Events included a car show, a golf outing, a basketball game and a “Viking’s Hope: Shave for the Brave,” in which people either had their heads shaved or donated their ponytails for Children Without Hair, which makes wigs for children at no cost.

“Most of the chemotheraphy was not working very effectively. The side effects were way worse than anything positive,” he said.

Then his doctor found the trial treatment that had good results with another cancer patient who was in hospice care. They worked on getting Tanner approved to be part of the clinical trials.

“Immediately, I knew it was amazing because I had no side effects,” Tanner said. “I started to gain weight again. I gained so much weight, I was able to get my feeding tube removed. That was the first sign the new chemo was working.”

“I was able to start working out more. It was really different. Before, it was more I didn’t feel like doing anything. I was able to feel like a normal person. Now I can push myself. I can wake up the next day and not have to worry that if I don’t feel well or I have a fever, I’ll be stuck in the house.”

He said his senior year of high school was great. While rejoining the football team was out of the question, he was on the bowling team. He rejoiced at being able to complete research papers and academic projects for classes. He holds a job on the line at Cockeye BBQ in Warren.

He is looking to start classes this fall at Kent State University at Trumbull, majoring in psychology with a minor in writing so he can convey his experiences.

“My end goal is just trying to live a normal life while also battling one of the most difficult things I will ever have to deal with,” Tanner said. “I can share that story and help people.”

He will live with the cancer the rest of his life, but now he has hope that it will be undetectable and under control.

Tanner’s advice to others in this situation: Keep moving and stay positive.

“If I thought I was going to die, I probably would have died,” he said. “One of the major things is my parents pushed for me to be constantly moving, constant motivation. If I was in bed, then read. I just wanted to be healthy, and sometimes being healthy is just to keep moving. Moving the body moves the mind.”

“I’ve written on this. There will be a podcast on June 3 about this. I call it therapeutic alliance,” Anderson said. “Patients nowadays participate in their care in very meaningful ways. Some of it’s nutrition. Some of it is motivating doctors.

“When you have a therapeutic alliance, it’s a kind of give and take of mutual respect, where you develop common goals. It’s good outcomes like this that make you just delighted to work at a place like Cleveland Clinic. So many people are needed to provide not just high quality care but the latest and greatest advances for rare cancers like Tanner has.

“The clinical research team — for us, not only myself, it’s the patients like Tanner that make us want to come to work early every day.”